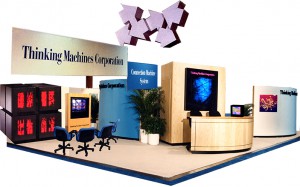 Image courtesy of philmanker via Flikr.

Attending any conference as a vendor is a busy time. Anyone who works in the life sciences vendor segment in commercial (i.e. customer-facing) marketing will understand that traveling to a few tradeshows in a year is a part of the job, and often an enjoyable part of the job at that. (Imagine a company-paid expensive hotel in a cosmopolitan North American or European city’s downtown nightlife district, early-morning through late-night activity that may include a nice dinner, company social events for customers and prospects, being on your feet in a 10-foot tradeshow booth engaging customers and prospects in real-time, sharing and receiving information in a constant stream in a time-limited way, and you get the general idea.)

With a large company like Life Technologies there are plenty of people to help spread the work around. Local sales representatives available to help out with the show booth, internal trade-show specialists to assist with lining up everything from literature to reserving workshop space to obtaining bus permits (the Ion Bus needs to get permission whereever it travels), a medium-size tradeshow will generate many conference calls and a shared multi-sheet Excel planning document that can be worked on up to several months in advance.

Being in the middle of the launch of the Ion Torrent Proton next-generation sequencer, a busy schedule goes into overdrive. Along with the aforementioned Ion Bus this past summer and through the rest of this year there’s a flurry of activity. Two weeks ago Life Technologies held a successful Ion World conference in Redwood City California, with over 400 attendees. (If you are interested in seeing some of the talks, they have been recently posted on the Ion Torrent YouTube channel, with great talks by Chad Nusbaum of the Broad, Joe Boland of the NCI Advanced Technology Center / Division of Cancer Epidemiology and Genetics, and Tim Triche of the Keck School of Medicine, University of Southern California.)

Simultaneously my colleagues in Brazil had a four-day Brazil Society of Genetics meeting, in Foz do Iguacu (Iguazu Falls), with about 1400 attendees, and just about all of them attending the booth, and a promotion on their FaceBook page. Last week, the University of Arizona held a focused conference about Epigenomics and Environmental Arsenicals in Cancer, organized by Bernie Futscher. This week Children’s Hospital of Philadelphia (CHOP) and BGI (Shenzhen China) organized the 1st International Conference on Genomics in the Americas,

And what was the common thread throughout these events? I was involved directly (sharing a talk, working an exhibit booth) or indirectly (publicizing, planning, participating in organizing) each of these eve6nts. No complaining here, all these events were very successful by many measures, and each one with memorable conversations, learnings and conections. For example – I had no idea that the levels of arsenic in private well-water is not regulated by the government, and is remarkably toxic as a carcinogen. Another example – there is a company called Convey Computer that produces FPGA-based server hardware for speeding up dramatically the time it takes to do any number of different types of genomic alignments. But I digress.

Yesterday I had a brief conversation on the trade-show floor with a former colleague at Life Technologies who is now heading up the commercial team at RainDance Technologies. They are preparing their digital PCR offering to launch soon. (I wrote about the digital PCR market here.)

Andy Watson  (the former Life Technologies person now heading up commercial management for RainDance) told me that their sensitivity was once described a 1 in a million, now corrected to 1 in 250,000. Why the apparent decrease? A single cell has a DNA content of about 6 pg, so 1 part in 1 million for DNA would represent a single minor allele in a tube of 6 micrograms (6 ug) of sample. Does anyone do PCR with 6 ug of template? 1 in 250,000 would represent a sample of 1.5 ug, which due to how the RainDance microdroplet method partitions the input, is a feasible proposition. They are gearing up for the full commercial released of their digital PCR application, over the next coming months. With up to 10 million droplets and multiplexing based upon color intensity (up to 10 test targets from the same sample), they will join BioRad and Life Technologies for the growing (but in its beginning technology-adoption phase) digital PCR market. (I’ve written this up before here.) How the market will respond to a much larger number of individual datapoints for digital PCR remains to be seen; at the low-end is the new QuantStudio 12K Flex from Life Tech (~3000 datapoints), the mid-range is the QX100 from BioRad (~20K) and on the high-end is the RainDrop from RainDance (~10M).

Life Technologies has a nice Competitive Allele-Specific TaqMan PCR assay (called castPCR) that originally had a 1 in a million sensitivity when it first came out about a year and a half ago. It has since been corrected to 0.1% (that’s one in 1,000) as the input of the castPCR assay is 20 ng, which represents about 3,300 diploid genome equivalents. The number of castPCR assays has been expanding (I understand that the menu of castPCR mutation assays has expanded to several hundred). However it is important to point out that castPCR gives sensitivity around a single a priori known mutation, rather than the sequence of a particular exonic region.

And the sensitivity of measurement of minor alleles from FFPE samples is only 5% via next-gen sequencing, a function of the error rate (regardless of the amount of coverage). It is a fact that with a 1% (approximate) error profile, even without taking into account sequence-specific bias the ‘floor’ of the limit of sensitivity is a 5% minor allele frequency, as a base that is an error 1% of the time is easily mislabeled as a mutation one is searching for.