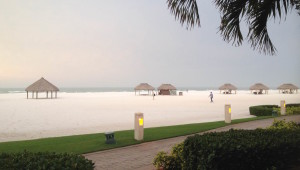 View from the Thermo Fisher suite

In the closing session of the Advances in Genome Biology and Technology meeting recently concluded in Marco Island, Florida, the main organizers Dr. Eric Green (National Human Genome Research Institute Director, Bethesda MD) and Dr. Elaine Mardis (Co-director with Rick Wilson of the Genome Institute of Washington University, St. Louis MO) asked an interesting question – whether they should set-up an area where blog posts could be written (and recorded) for the benefit of others. I think it is a good idea – to have a forum by which participants can share their thoughts and impressions, as over the years these get scattered as certain blogs appear (and disappear as circumstances change).

As one example, Anthony Fejes shared a lot on his old blog, and if you want a snapshot on how things have changed in five years you can access his notes from AGBT 2010 here. (His 2009 observations are summarized in a single post here, dated Feb 9.) And then in 2010 he moved over to the Nature.com blog network but it was short-lived, and is now blogging under a subdomain (here’s a link to his AGBT 2011 notes). Not being able to attend since (the most recent post was an invitation to ‘guest blog’ from the 2012 meeting but there were not any takers), he’s moved onto other topics in bioinformatics, and notably hosted a Reddit AMA a few months ago (I admit that I missed it, even though /r/bioinformatics is an interesting sub). He even received ‘Reddit Gold’, which is a way readers can reward useful contributions with additional Reddit superpowers.

Anyway, back to the topic of guest blogging and AGBT: there were a number of new faces on Twitter using the #AGBT15 hashtag, and the prior notables that blogged about AGBT in prior years were absent, such as Lex Nederbragt (his ‘In Between the Lines of Code’ is widely read and last year was his first AGBT) and Keith Robison. Keith’s ‘Omics! Omics!’ site had a number of notable #AGBT15 posts, including a nice description of the just-announced 10X Genomics platform, and this review of Thermo Fisher Scientific’s progress with the Ion Torrent platform. Another blogger that comes to mind is Dan Koboldt of MassGenomics.

One simple fact is that at AGBT the intersection of public communication via this new media platform and attendees will change from year to year. This year perhaps other voices will start to share their opinions online – but for Lex, Keith and Dan they all have limited travel funds (who doesn’t?) and like anyone else has to be selective on which conferences to attend in a given year. (Of course there were commercial media present, such as reporting from GenomeWeb which will be sure to be written up and published over the next few days, as well as a number of Wall Street analysts who will be writing up their research reports for their respective audiences.)

The challenges of getting blog posts written

And blogs quickly become dormant – I see that the excellent GenomesUnzipped hasn’t posted since March of 2014 – for a wide variety of reasons, the primary one is that everyone is busy. The opportunity cost of writing down thoughts versus doing ‘regular work’ or other special projects or fulfilling other commitments is completely understandable.

So if AGBT as an organization does setup a guest-blogging platform (which I do plan on supporting, for what that’s worth), there is a bar it must hurdle – that of taking the time and effort of sharing opinion and feedback ‘on the record’. I hope that in the coming year there will be more people who can summarize their thoughts and impressions – it seems like it was only James Hadfield and his excellent Core Genomics blog who was there in-person.

And thus the value of in-person (“IRL”) interaction at a conference – the social component of asking for opinions and perspectives is invaluable. No dependance on getting people to write a guest post – they can simply share what they think. (And at all those – ahem – after-session informal get-togethers colloquially known as ‘parties’, there were plenty of opinions shared over a wide variety of topics, for sure.)

Okay, it does leave me as a blog-post writer who attended as well – and I want to thank all those who came up to me during AGBT to introduce yourselves. If I’ve learned anything through almost three years of blogging and tweeting, is that there are many people who find out who you are through your writing that you may never meet. (And thinking about it, we all have benefited enormously from the writings of people we will never meet, in particular the many writers of the Great Books that have so shaped Western civilization.) Thus the reach of the written word – even if it is in an ephemeral media such as an online blog – is a powerful thing.

So onto what I thought about AGBT: I’ve written up already (for the Thermo Fisher Scientific blog Behind the Bench) a post of my favorite talk at this year’s AGBT, Carlos Bustamonte (Stanford) talking about a unique application of forensic DNA analysis combined with his expertise on human population genomics – tracing the trans-atlantic slave trade from 1721 through several centuries (his data goes through 1910). His presentation was entitled “PhenoCap: A Targeted Capture Panel for Comprehensive Phenotyping of Forensic DNA Samples”. So keep an eye out for it, it should go live in a few days. (There already are some 5 video interviews from AGBT 2015 up on the website, with many more to come.)

For sure I would be remiss to not mention 10X Genomics; they launched their product at this conference, and made quite an impression. A sample-prep device that takes 1ng of >100kb-length genomic DNA, partitions it into 100’s of thousands of pL-volume emulsified droplets (although to be frank the word ’emulsion’ has never been used by them in any of their presentations nor in my conversations with them), and uses one unique barcodes per microreaction (picoreaction?) to individually label that >100kb strand, so that afterward the 100’s of thousands of uniquely-labeled sequences can be deconvoluted and aligned together. I won’t re-iterate the details – Keith Robison wrote them all up here.

Shortly after the afternoon presentation, which I described to a friend as ‘pitch perfect’, I was minding my own business at dinner when John Stuelpnagel (a founder of Illumina as well as of 10X) joined us. (It brought back fond memories of my own cubicle at their old building on Towne Centre Drive, where I was only around the corner from John’s cube. I found out quickly that he was an early-riser like myself, and found his input always insightful and so valuable. Good times.) After talking about Poisson distributions and clarifying species specificity and other minutiae, he told me that they had mathematically modeled the numbers their engineers needed to design the system to (you can imagine how expensive it is to synthesize and manufacture many hundreds of thousands of oligos, but that is how Illumina started way back in 2000-2001), and that once they built their system the experimental results matched perfectly with their calculations! This can be called ‘optimum company management through mathematics’.

From the applications perspective, friends I spoke to (several core facility directors, who I just might see at the upcoming Association for Biomolecular Resource Facilities meeting in Saint Louis MO March 28-31) were eager to give this platform a try. They all agreed that for cancer applications Levi Garraway’s plenary talk was noteworthy (yes they had a plenary speaker in the morning session have several data slides featuring 10X Genomics results).

One other notable item regarding long haplotyping (for background on diploid phasing, I wrote a piece called ‘The Unexplored Diploid Landscape’ here), was that several presenters said they had optical mapping data (in reference to BioNano Genomics), but no data from that platform. It seemed as if optical mapping was only used in a validation function, to confirm findings from either Pacific Biosciences’ long reads (average on the order of 10kb, up to 47kb long) or short-read method (i.e. Moleculo).

Another impression from AGBT 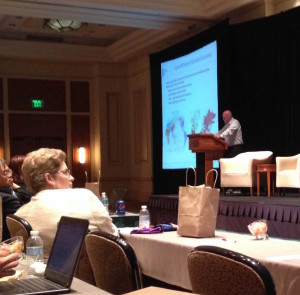 On the note of Pacific Biosciences, it seemed like they were everywhere. (By ‘everywhere’, I meant in the sessions.) Certainly The Gene Myers spoke about his next step – development of a local aligner, with other tools making much-improved human genome reference assemblies with far lower compute requirements. (It was not unusual to hear 60x improvements in speed, just by looking at these problems in a different way – thus my own admiration for people who have the freedom and ability to choose the problems they want to work on.) If you want to see what a splash The Gene Myers made at AGBT last year, see here.

By getting fully-phased human genomes first with CHM1, Mike Hunkapillar (CEO of Pacific Biosciences) showed metrics for the CHM1 hydatidiform mole (a haploid human genome), with N50’s far longer than any human genome reference assembly to-date (for HuRef-1, it was an N=50 of 10.5Mb). In addition there are some 18 projects at four collaborators worldwide working on other CHM samples (i.e. derived from different individuals). Important work here – an overarching theme of phased haplotypes, and what the scientific community can learn about the role of genetic variation in an allele-specific manner.

A final impression from AGBT

The splash from prior years about single-molecule sequencing from newer technologies (i.e. Oxford Nanopore, Quantum Biosystems, ZS Genetics, and others) seems to have died down. There were a few presentations that included Oxford Nanopore data but they had no error rate metrics, talked about how it felt like an ‘alpha or beta’ version, using His-tag metal chelating purification resin (hello QIAGEN!) to enrich for hairpin-containing library molecules, so the MinION platform is still something of a work-in-progress. I myself am amazed that they can get 512 single-molecule pores as a manufacture-able item and read electrical signals as nucleotides pass through. (For additional context and background, here’s a post from AGBT14 about ONT.)

One observation (from another friend, yes he was another core facility director) noted that there was no data or other findings from the X-10 whole-genome sequencing platform. Naturally J. Craig Venter said he was planning to purchase many more of them for his Human Longevity Institute to fulfill their goal of 1M whole human genomes and that he wouldn’t share any results that he will be commercializing. And other than a poster (or two?) about technical aspects of the X-10 platform, it was something of an omission that did not go unnoticed.