Genomic medicine will occur when research becomes translated into clinical and reduced to practice. 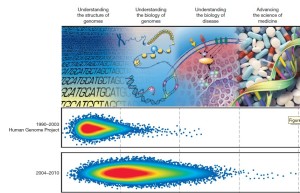 Years ago Eric Green, the Director of the National Human Genome Research Institute (and one of the two organizers of the Advances in Genome Biology and Technology conference) would often talk about the need to make the knowledge of the human genome and the advances in sequencing technologies ‘reduced to practice’. In 2011 he and Mark Guyer published a strategic plan in the journal Nature, called ‘Charting a course for genomic medicine from base pairs to bedside’. This was the culmination of a two-year effort, and this plan was published in coordination with a public symposium held on the NIH campus, which I was able to attend.

Now through the magic of the interwebs, you can see what the genomic community thought in 2011 as their presentations have been made available here. Eric Lander of the Broad Institute, Sean Eddy of HHMI, Rick Lifton of Yale, Maynard Olson of University of Washington, they all share their perspective of the past and the chart of the future in their talks. (Hint: if you want to save some time, not only have the video been made available but also their slides, and then you can go back to the video if so desired.)

Anyway, the concept of ‘reduce to practice’ and the phrase ‘from base-pairs to bedside’ mean so much more than just making an assay shorter or automating it or updating the gene panel for more targets. It means putting a laboratory process through a series of steps called assay validation, which over a number of samples, a number of conditions (such as operator, system run, sample types, and other variables) can show that a laboratory test can be offered for diagnostic purposes.

This by the way is a current ‘hot topic’ of US Federal regulation, with the FDA signaling since the end of 2013 their intention to increase their discretionary enforcement power over so-called ‘Laboratory Developed Tests’, which has been an off-and-on effort stretching back for decades, but that is another topic. (For additional information and background, a colleague of mine has written his perspective on this topic here and another colleague has written a counter-point here at the SeraCare blog Genomic Precision.)

At the AGBT conference the decision was made (and announced at the 2015 meeting) that in 2016 the conference had grown in popularity enough so that it would be split into two separate ones – the original research and technology-oriented one in February (traditionally in Marco Island Florida) and a new clinically-oriented one later in the year, currently planned in Arizona in September of 2016.

Yet in this February conference there have been very strong presentations on the clinical applications of these powerful genomic technologies. For example, the Pacific Biosciences / Roche Sequencing workshop on Friday was titled “Revealing the Unknowns in Medical Research with Long-Read SMRT Sequencing”. Euan Ashley, a prominent genomic researcher at Stanford, had one major take-home slide that I very much appreciated, and that was this: “Precision medicine needs to be accurate medicine”. He followed that slide with several examples where existing sequencing approaches and technologies fail to be accurate. For example, a rare heart condition called Long QT Syndrome <https://en.wikipedia.org/wiki/Long_QT_syndrome>, one of the major causative genes is called KCNH2 (type LQT2, OMIM 152427) and on one of its coding exons there are no less than 19 ClinVar variant entries, yet via NGS methods there is zero coverage. That’s correct – no bases for that exon at all. This problem of a ‘false negative’ is a big one – what you do not detect you do not know about – and thus a clinical test needs to make sure that what the assay is designed to measure, it actually measures it.

Dr. Ashley also mentioned Huntington’s disease, with a triplet (CAG)n that varies in length in the individual, and have lengths that are unresolvable except with an increase in read-length, which needs a different technology (namely single-molecule sequencing). He pointed to this paper that lists no less than 31 genetic disorders that are DNA triplet repeat expansions.

There were other timely and interesting presentations during this workshop. Bobby Sebra of Mount Sinai I mentioned yesterday in the context of a different technology, but here his talk was titled “Leveraging SMART sequencing technology for developing niche assays with diagnostic potential”, and listed four or five impossible-to-determine situations ranging from CYP2D6 genotyping for pharmacogenetics to resolving a difficult pseudogene to an C9orf72 ALS G4C2 challenging repeat. Ben Murrell (UCSD) spoke about HIV env gene evolution and simultaneous Hv-chain antibody evolution. If you’d like to view the workshop, Pacific Biosciences has kindly made it available here.

Last night, Dr. Geoff Otto of Foundation Medicine shared a presentation entitled “Assessment of the relative clinical utility of ctDNA and tissue biopsies for the detection of actionable genomic alterations in routine clinical oncology specimens”. He said a clinical test had to have five features: It has to be comprehensive (‘you only get one shot to maximize the diagnostic yield’); it has to be of high quality (‘it has to work with process-matched controls’); it has to be accurate at low allele frequency and high specificity (it need to have high Positive Predictive Value, no false-positives and few if any false-negatives); there needs to be analytic validation, and that validation needs to be transparent ‘to the field’; and it has to be operational, it has to ‘actually work in a reasonable timeframe’.

He then went onto show soon-to-be published data on their validation, and since it hasn’t been published yet suffice it to say their circulating tumor DNA assay has PPV’s of >99% for base substitutions (single nucleotide variants or SNVs) and PPV’s of >98% for Copy Number Alterations (CNAs), and; >98% for indels.

Last October another ctDNA diagnostics company Guardant Health published their circulating tumor DNA assay validation, to give you an idea of the scope involved in this important work of ‘reducing to practice’. The genomic revolution of base-pairs to bedside is well underway.