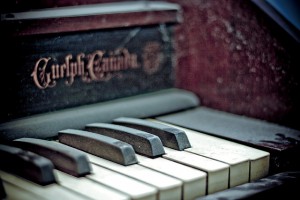 The house I live in is very nice. As a matter of fact, it is the nicest house I’ve ever lived in¹. Yet it seems like no matter how many things we improve, there is always ‘one more thing’ to make it nicer. Built in the 1970’s, it was built with the latest in audio technology – a Nutone whole-house intercom / music system (monoaural), driven by latest in audio technology of the day, the cassette tape!

Oh the cassette tape, how I loved making my own mix tapes of groups like Styx in the late 1970’s, now forever banished to the trash. No more albums to stack up in a milk crate, no more cassette players in dashboards, even CDs seem quaint in this brave new world of mp3’s and iPods and flash-memory-based music everywhere. And the house? Stuck still with a cassette player that costs a whopping $1000 to upgrade to an MP3 ‘dock’! (At least for $1000 you get AM and FM thrown in for free.)

At the time these houses were built in 1972, the economy was still humming along, and these intercom systems were popular. (From what I’ve read, builders in the 1970’s would install a unit that cost them about $150 in wholesale volumes, and pass along a $1000 or $1500 retail cost to the new home buyer. Fast forward 40 years, and I want music from my computer across the house wirelessly, controllable from any laptop, iPhone or iPod Touch or iPad we happen to have handy.

So I gave an unused Airport Express a try, along with this Lifehacker article, and a pair of el-cheapo Dell generic computer speakers. AirTunes works great – everything hooked up, iTunes makes AirPlay available on every iOS device, and we even had a BBQ and friends over to demo the new system the next day. So it works pretty well, is cheap enough (total outlay: $0.00, as I had all the parts on-hand), but over the next few days the signal inexplicably drops out. Reset, restart iTunes, unplug and replug, to no avail (the firmware had just been flashed to the latest version). After looking around for a solution, I give up, and put the Airport Express back in the drawer (I used to use it for travel to make hotel room a local ‘hotspot’, but I simply don’t bother anymore and carry with me a lightweight, and long, Ethernet cable), and the speakers go back into the closet.

A few months later, I come across this article and it piques my interest. Subsonic app for the iPhone / iPad, a Subsonic server (10€ donationware) on the local PC to serve up any music to any other web-connected device throughout the house. Setup does take a little tinkering around, as it needs to have port forwarding setup, and the default port 8080 was already in use, so I had to change that as well. Throw in a used Infocast box (Best Buy discontinued selling them in early 2010) for $29 off of fleabay, install the Subsonic app to the Infocast unit, hook up some speakers, and you are done.

Hmm, there may be something to this here. Sonos was too expensive ($400 for a single powered speaker? I understand it is a quality mesh network created on-the-fly, but $400?) and the Logitech Squeezebox offering at $150 apiece could be okay, but apparently does internet radio fine but not streaming local content. This solution cost me $29 for a little 3.5″ touchscreen infocast box, and it seems to be just the thing I needed – I can hook up whatever amplified speakers with a 3.5mm plug that I feel like plugging in, and the built-in speakers are available if I want to go that route. The Chumby platform, though, seems to now have lost a lot of its original momentum, and even their website store is down; it isn’t as if the Sony Dash is taking the consumer imagination by storm. (It appears that the Sony Dash is also discontinued.) However, Chumby was setup originally as an open-source hardware platform, with an active Chumby developer community, so I’m not particularly concerned about not getting needed support in the future, as long as the necessary apps are there to connect the software to whichever the output device is.

And how does it work? Amazing to stream any song from my PC to any other PC / iPod / iPad / Android device, as well as to any number of remote Infocast boxes, we have one in the kitchen right now (until I get obtain additional units). It’s a keeper for sure, and I’m seriously thinking of adding another unit (or two) to get this experience in many additional rooms. One downside is that it isn’t a portable unit (it needs to have an A/C adapter for it to work), and another downside is it takes some time to wake up from power off (with several touchscreen presses to connect to the network over wifi), but it does the job very well.

So the master media PC can serve up music wirelessly throughout the house, and during get-togethers where we want music in the family room’s home theatre audio I can simply use AirPlay through a newish receiver. It’s great to have options.

¹ Once in a moment of reverie I listed all the places we’ve lived since I got married some 14 years ago, and came up with 9; 9 places in 14 years, or an average of 1.4 years per place. Hmm, we’ve been here longer than the average length of stay for our current place. Perhaps it is time to move… 🙂