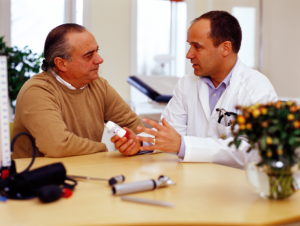 There is a numbers problem, and a biomarker one as well.

Annually the worldwide cancer drug market is on the order of $110 Billion, and individual immuno-oncology drugs cost the US healthcare system on the order of $100K to $150K per year. With such large financial incentives, there are currently over 900 existing clinical trials at clinicaltrials.gov for new immunotherapies in development (over a dozen of new biologics targeting PD-1/PD-L1, with two in the late stage of testing) or combinations of an existing approved immunotherapy with another existing treatment. The immunotherapy Keytruda / Pembrolizumab has over 300 clinical trials either by itself or in combination with other therapies.

Overload of clinical trials for immunotherapy

Why are there so many clinical trials with only one immunotherapy, Keytruda? The optimism for a combination approach stems from the first combination trial called CHECKMATE where Yervoy (a CTLA-4 immunotherapy with often-severe side effects) was tested as a monotherapy, in combination with Opdivo / Nivolumab, for advanced untreated advanced melanoma. (As mentioned before, melanoma had been chosen for the first type of cancer to be treated with immunotherapy, due to its high immunogenicity, as well as its poor treatment options.) The results showed a tripling of the objective response rate (ORR) from 19% to 57%. A simultaneous trial in non-small cell lung cancer (NSCLC) also showed a tripling of the objective response rate from 13% to 39%.

Given this kind of promise, you can imagine the myriad number of permutations when combining therapies: which combination of four approved PD-1/PD-L1 immunotherapies to choose from, or which of the four to combine with a standard chemotherapy or other targeted therapy (of which there may be several options). Not only this combination, but whether to test this chosen combination as a first-line treatment, and if so, at what dose. Even though this is a formidable task, it has not held back the mushrooming of combination clinical trials now to number in the many hundreds.

Therefore with over 900 immunotherapy-related clinical trials, where will the patients for these trials come from? Given the 12-year timeline and $5B cost it takes to get a new therapy from concept to market, it will take more money and more time, if the clinical trials chase after a limited pool of suitable candidates. Currently the cost to a pharmaceutical company for a single enrolled patient into a clinical trial is on the order of $100K.

Recently at the 2017 Molecular Medicine Tri-Conference in San Francisco, Kenna Shaw (Executive Director of MD Anderson’s Sheikh Khalifa Bin Zayed Al Nahyan Institute for Personal Cancer Therapy [IPCT]) presented a talk entitled “Precision Oncology Decision Support: Getting the Right Drug(s) to the Right Patient(s) at the Right Time(s)”. Now MD Anderson is one of the top three leading academic cancer research / clinical trial sites in the country (the others who contend for that role is Massachusetts General Hospital/Dana Farber Cancer Institute, and Memorial Sloan Kettering Cancer Center in New York). A brief search at ClinicalTrials.gov for the terms ‘MD Anderson’ and ‘cancer’ that were open for recruitment reveals over 800 clinical trials occurring there right now.

Dr. Shaw was blunt in her presentation: “We are not providing precision medicine to the majority of our patients” and even with lower NGS costs and increasing amount of data (that is, sequencing depth on a per-gene, per-sample basis) there was “the same (terrible) hit rate of 11% for a 50 gene panel, and 5% for whole-exome sequencing”. She pointed out a truism for the state of precision medicine today: “we are all equally bad at doing this: who to test, how much to sequence, how to pay for it, and how to demonstrate effectiveness”. Of over 2,000 patients enrolled at clinical trials at their center at MD Anderson, 40% had a potentially actionable mutation; however, only 4% of eventually went onto enrollment into a clinical trial. In other words, of 2,000 patients willing to enroll in a clinical trial, 800 of them were molecularly eligible for a trial, but only 80 of the 2,000 ended up enrolling.

There are a multitude of reasons for this, not the least which is the definition of ‘potentially actionable mutation’. Her group was able to construct a knowledge base for decision support, in order to lower the ‘variants of unknown significance’ which comprised the vast majority (95%) of the variants they detected; currently their enrollment rate is up to 25%, 7% of those who are enrolled with a VUS in an actionable gene. She concluded her talk with a preliminary MD Anderson overall survival analysis curve (called Kaplan-Meier) for these patients, where the survival benefit was clear.

A larger study recently published by Memorial Sloan Kettering used their MSK-IMPACT multi-gene profiling (410 genes) and reported that about 37% of the first 10,336 advanced cancer patients who were tested had actionable mutations, and 11% participated in a clinical trial that matched their mutations to targeted therapy. This percentage is quite a bit higher than the results reported by MD Anderson, which has been attributed (subscription required) to the opening of ‘basket trials’ at MSKCC, where enrollment of patients is per the molecular alteration across a multitude of cancer tissue types that allow patients with rare tumor types to participate. Another reason for the relatively high enrollment rate is that this study was opened only to cancer patients with either advanced or metastatic cancers, where alternative therapies likely may not be available.

Even with the higher percentage of enrolled patients, still 89% of their patients enrolled in clinical trials (that is some 9,200 out of 10,336) had no precision medicine to offer them on a clinical trial basis. Think about this: 89% of patients who wanted to be enrolled into a clinical trial received only standard treatment, often with poor prognosis.

The online publication Medscape recently surveyed 132 oncologists about their perspective on their use of NGS-based multi-gene panels for cancer, and how they use this information in their daily clinical practice. While they believe genomic testing to be a potential major advance in oncology, they ‘also believe that is significantly overpromoted to date’. (free registration required). A full 31% of the respondents felt that ‘it is too rare that it (genomic testing) provides clinically actionable, evidence-based information’, but that the top two reasons for ordering NGS-based oncology tests were to guide treatment decisions (66%) and to direct patients to clinical trials (16%). Other datapoints recapitulate the studies cited above: half of the respondents (49%) felt that genomic testing resulted in clinical trial enrollment less than 10% of the time, and other 26% felt that it was 11% to 25% of the time.

A prominent National Cancer Institute study, the Molecular Analysis for Therapy Choice (NCI-MATCH) has seen an increase of the number of treatment arms increase from an original 10 to 24, one of the reasons for which was the low percentage of matching patients. Even with a 24-arm clinical trial, of the first 4,000 patients enrolled about 700 or 18% have been matched. They aim to enroll a total of 5,000 patients in this trial.

Given over 900 immunotherapy trials and a severely limited number of patients who qualify for these trials, either it will take longer to accrue the subset of enrolled patients, or somehow increase the diagnostic criteria by which they are selected.

For immunotherapy, the criteria that currently exists is PD-L1 expression immunohistochemistry (IHC), which has been approved as a companion diagnostic. However, there is very limited value in PD-L1 expression as a prognostic marker, in its ability to predict that a patient whose tumors express PD-L1 will respond to immunotherapy or not. Looking at this KEYNOTE-001 trial (“Pembrolizumab for the treatment of non-small-cell lung cancer”) digging into the Appendix you can see that the True Positive / False Positive rates has been calculated; the Receiver Operator Curve (Figure S4 in this PDF) is not very sensitive nor very specific.

At the recent American Association for Cancer Research conference, Matthew Hellman of Memorial Sloan Kettering (New York NY) gave a talk entitled “DNA-based approaches to examining determinants of response and resistance to PD-1 blockade”. He pointed out that whole-exome sequencing (WES) was a “reasonable proxy” for Tumor Mutational Burden (TMB) although an exome was not “specifically designed for that purpose”. He made the distinction between neoantigen burden and tumor mutational burden, as immunologically relevant neoantigens in tumors are relatively few.

TMB on its own is not sufficient, indicating a correlation to immune response to checkpoint inhibitors. When combined, both PD-L1 expression by IHC and WES as a proxy for TMB, it may only increase the immunotherapy-eligible population by about two-fold, from 11% to perhaps 20% to 25%. And this is not including the additional cost of doing an exome test; a PD-L1 IHC test is only about $90, whereas a whole-exome test will cost on the order of $500. There are plenty (about 3/4) enrolled patients for immunotherapy trials that will not be qualified to enter.

And so the effort find better biomarkers is being done in earnest; additional markers such as microsatellite instability (MSI) is being investigated by many groups (several posters at AACR have included MSI measurements along with PD-L1 status and TMB), yet MSI is present in about only 5% of the patient population. It is still a numbers problem, how to predict which of the 95% without MSI will respond to checkpoint inhibition.

Some food for thought

There are over a dozen novel immunotherapy agents in the >900 immunotherapy clinical trials currently underway; the PD-L1 IHC diagnostic test will only help subdivide likely responders to existing PD-1 and PD-L1 inhibitors. What about guidance on the others?