Yesterday’s Ion Torrent Proton PII™ and Illumina NextSeq 500™ post certainly got a reaction from several quarters, including detailed pricing information about the 1x75bp format for the high-throughput configuration on the consumables.

Instead of making edits to the original here are some clarifying points, as it is clear that Illumina is making a break from their prior pricing model that they used for the MiSeq.

For those not familiar with MiSeq pricing, to compete with the Ion Torrent PGM™ relatively inexpensive 314 and 316 chips (about $300 and $550 per run respectively at a current >60MB and >600MB throughput respectively), Illumina has a ‘micro’ and ‘nano’ sized flowcell / reagent kits with lower throughput, that have similar read numbers and throughput. However, due to the cost of the reagents and flowcell, the smaller-sized kits are still expensive to produce and to sell, with the least expensive ‘micro’ kit still costing on the order of $800 or $900 to run.

Thus I mistakenly assumed that a 1×75 high output run on the NextSeq 500 would be priced relatively high – I used $3500 per 1x75bp run for the ‘High Output’ mode – which was incorrect. Based upon some pricing information I was given, the reagents were not just 20% less but a full 66% less – one third the price I had originally surmised, or $1300 per 1x75bp run.

So the pricing per 100M reads on the high output mode in a 1x75bp configuration is aggressive pricing, sitting right on top of where the PII is. Doing other calculations for throughput (price per GB) appears to be much more in line with the prior model (i.e. fewer cycles = less efficient on from a cost per GB perspective).

And so I present to you and updated chart, having to add a large number of rows to accommodate all the different pricing permutations. For those of you who have never worked in marketing within a commercial life science research market company, the two most difficult things you will ever work on are naming products, and pricing them. I know the meaning of the phrase first-hand: “No one knows the price of anything”, because of course the price of anything is what individuals are willing to pay. 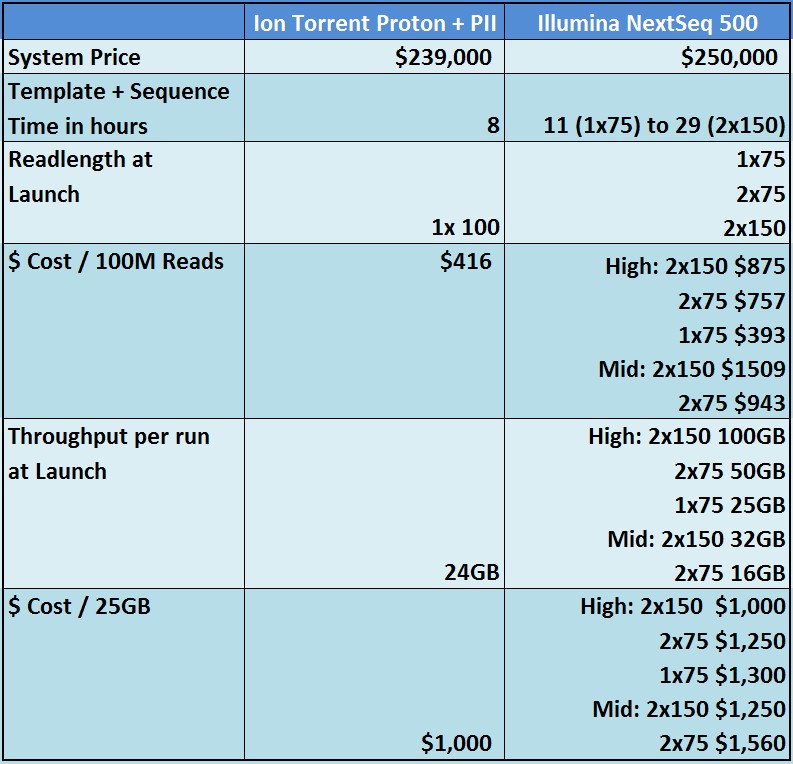 Revised version of a PII and NextSeq 500 comparison chart

So the picture is not nearly so clear-cut in terms of pricing – and looking over the ‘cost per $100M reads’ for the different formats on the right, that $393 pricing does appear to be somewhat incongruent.

I learned something yesterday – and every day that I learn something is a good thing. The NextSeq chemistry uses a fluor for ‘T’ base, a different fluor for the ‘C’ base, and the ‘A’ base is composed of two fluors that have similar emission / excitation spectra as the two prior bases but are not identical. Why this is done very likely resides in some complex explanation, perhaps involving biochemistry (the ability of a modified polymerase to accept a nucleotide decorated with two different fluors must be a wonder to behold at the atomic level), or optics (there is an incredible amount of engineering involved when you are using a system that started out with the first Solexa instruments basically a confocal microscope scanning device). Thinking through the chemistry, and how different it is compared to the existing HiSeq / MiSeq chemistry, it will be of interest to see what kind of GC sequence bias it has along with the primary modes of error.

On that note I’ll have to start searching for a NextSeq dataset and play around with it.

Way back when I first joined Life Technologies in early 2010, a person involved at Sanger during the Human Genome Project (HGP) days said during a SOLiD 4 training “when there’s money to be made, miracles happen” regarding technology development intersecting a free market. That point rings true again and again. It was last year during a talk Eric Green (Director of the National Human Genome Research Institute) was giving where he wondered whether the cost-per-MB curve that the NHGRI NISC regularly publishes had hit a plateau or not. It’s clear that market competition will be forcing prices down yet again.