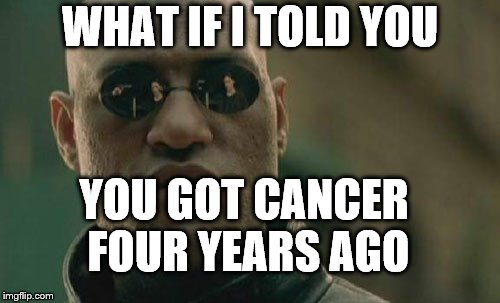 Announcing a big move for Dale affecting his family, his employer, his colleagues, and his friends

The magic wand of early detection

Several years ago at a meeting with sales management, someone asked a provocative question: “If you had a magic wand, what would you ask for?” If you are in the field of cancer research, if you are a survivor of cancer, if you have been affected by a loved one with this terrible disease, or if you are involved in cancer diagnostic testing, you would probably say ‘if we could detect cancer earlier it would make a huge difference’.

And the data bears this out. From this publication “Cancer Treatment & Survivorship Facts & Figures” (PDF) stark statistics jump out at you clearly making this case. For example on page 9, figure 5, 5-year survival statistics for colorectal cancer is only 20% survival if detected in late stage (that is Stage III or IV, where cancer has spread to a region or has metastasized), but 90% survival if detected early (that is Stage I or II or pre-cancerous).

Early detection has a long history

Way back in the early 1990’s at the John Wayne Cancer Institute in Santa Monica CA, I worked for years on early detection, doing experiments in mice and in cell lines to ferret out new molecular mechanisms and markers (mainly protein and RNA) related to metastatic melanoma. One of two National Cancer Institute Program Project recipients for immunotherapy, I worked in a tumor immunology department when it was considered something of a fool’s errand. However this year’s Nobel Prize in Medicine or Physiology has certainly borne the fruitfulness of these approaches.

Liquid biopsy and a flurry of activity

Thanks to the advent of NGS, and several other advancements in biochemistry and bioinformatics, minimally-invasive ‘liquid biopsy’ either on the basis of circulating cell-free DNA (cfDNA) or circulating tumor cells (CTCs) a flurry of activity is happening in the marketplace. For example Pillar Biosciences is working on a cell-free DNA assay, Roche with its AVENIO assays and Thermo Fisher Scientific with its Oncomine assays and several others including Swift Biosciences have assay technology for the translational research market.

From a larger perspective, there are over 100 companies in the liquid biopsy market for reagents, equipment, and analysis of cell-free DNA or circulating tumor cells. DeciBio, a market research firm, offers a Liquid Biopsy Competitive Intelligence Tracker keeping track of the dizzying array of offerings in this crowded market. (By the way, they presented a great poster at AGBT 2018 General Conference with very interesting research derived from their market intelligence – a snippet about how to access this poster is here.

Along these lines, major companies have used analysis of cfDNA detecting circulating tumor DNA, or ctDNA, at very low levels in plasma, often down to 1 part in 500 or 0.2% variant allele frequency, of multiple mutation types including SNVs (single-nucleotide variants), indels (insertion-deletions), CNAs (copy number alterations), and even MSI (microsatellite instability). Major companies such as Foundation Medicine (now a part of Roche) and Guardant Health (who went public only last week with an IPO called ‘staggeringly successful’) use cfDNA analysis to help guide therapy and monitor recurrence, and data is accumulating as far as its usefulness in cancer treatment. Take a look at this newspaper account of recent research reported in JAMA.

The current effort to find the GRAIL

If you are not familiar with GRAIL’s multi-billion dollar bet on early cancer detection, here’s a great piece by Antonio Regalado over at MIT / Technology Review. The subtitle reads, “Seventy percent of cancers caught early are curable. Can a blood test find them?” To borrow another quote from that article, “The company will need that money and more to win a technological race that is as significant, and as costly, as those toward driverless vehicles or new forms of artificial intelligence.”

But it will take a lot of money, and a lot of time, to get answers from large-enough populations to develop a cancer screening test, a clinical test for early detection of cancer. The CEO of Guardant admits “It’s the single biggest diagnostic opportunity in recent history.”

Another company, Freenome, is also chasing after this elusive and expensive goal, and last week announced at a conference promising progress with this method as well for early-stage colorectal cancer. Their poster presents data from over 1200 early-stage patient samples.

These efforts will take years; recruiting volunteers, setting up the trial, seeing their outcome (i.e. what is the ‘5-year survival rate’, morbid in the particulars but important in the abstract).

Which brings me to today

I announce today that my last day with Pillar Biosciences was yesterday (Friday Oct 12 2018), and today (Saturday) I am boarding a one-way flight to San Diego, leaving my home (and family, for now) in Maryland for a new adventure.

With next week’s American Society for Human Genetics, a small company called Singlera will present some remarkable and amazing data. So remarkable and amazing, that I’ve decided to leave my family, my sole extracurricular activity and circle of great friends as a Cub Scout leader of Pack 1280, and my other friends in Maryland to pursue that goal that so-far has been elusive: to detect cancer early.

The ASHG Abstract Planner doesn’t allow deep linking (as far as I can tell), but you can access the planner here and search for the poster number “2793”. You will find a poster on Wednesday with an abstract entitled “Circulating tumor DNA methylation haplotypes in plasma can accurately detect early-stage colorectal cancer and advanced adenomas in a single blinded study.”

And then search again, for a program number using the term “164”, then click on Thursday. You will find in Session #47 on Thursday, “DNA Methylation in Human Disease”, a talk at 9:45am titled “Circulating tumor DNA methylation haplotypes in plasma can detect cancer four years prior to conventional diagnosis.”

Think about the implications of this. Four years before earliest trace of any symptoms driving a diagnostic decision, or four years before a conventional screening exam can detect the earliest signs of cancer, you have much better chances of a treatment and a cure by detecting it early. No $100,000/year immunotherapy that extends life on average three months or so, no taking the chance that regardless of PD-L1 status only 30% show durable response even with that exhorbitant expense.

Not that I’m knocking immunotherapy, by no means; CAR-T therapy is also very exciting. But these therapies, by their very nature, are very expensive to develop and recoup development costs, as well as for CAR-T very expensive to produce. It’s just that this is not how cancer is going to be eradicated, which is what the NCI has trumpeted for decades; it is going to be early detection.

I am currently in the air on my way to San Diego, to start a new role at Singlera and a new adventure in bringing this technology to market.

If you are attending ASHG 2018 in San Diego, take a look at both the poster and the session on Thursday, and come by the Singlera exhibit (booth 445) where you can find me.

If you live in the San Diego area regardless of whether you are attending ASHG, you are invited to a joint Singlera / UCSD reception at the San Diego Hilton Bayfront on Thursday, October 18 2018 at 6:30pm – 8:30pm in the Aqua Salon AB. If you haven’t met me before and live in San Diego, well now here’s your chance.

Last if you are a potential collaborator on this exciting, novel and powerful technology (methylation haplotyping), do reach out to me. I don’t have an official Singlera email yet, but as of Monday it’ll be dale.yuzuki@singlera.com

What if I told you you got cancer four years ago? You would likely be alive today if you detected it early enough.