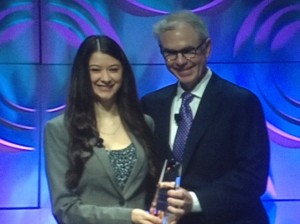 The reason I enjoy coming to large meetings like the American Association for Cancer Research (April 5-9 in San Diego) is the surprising things I learn. And the story of Elana Simon is one of them.

She did not appear on the program, but a new award was initiated this year by the AACR organization called the ‘Junior Champion Cancer Research Award’, and she was the recipient. Her story began when she was 12 years old, diagnosed with a rare Fibrolamellar Hepatocellular Carcinoma, a form of liver cancer. Surgery was their only treatment option.

Fast forward a few years, and in her sophomore year in high school she was using her computer science skills in an internship to help researchers sort through mutations. It occurred to her that she could apply these same analysis skills on her own form of liver cancer. With such a rare cancer (only about 200 cases worldwide according to the Fibrolamellar Cancer Foundation), collecting samples was a challenge as samples were not saved after surgery.

With funding from the Foundation, and help from her pediatric cancer surgeon Michael LaQuaglia from Memorial Sloan Kettering, she spread the word about the need for samples to do analyze. After the NY Genome Center sequenced 29 samples for both whole-genome sequencing as well as whole transcriptome sequencing (RNA-Seq), Elana was able to assist with the analysis of this data.

Published in February in the journal Science, a 400kb deletion mutation forming an aberrant fusion transcript formed from an in-frame fusion of the two genes DNAJB1 and PRKACA. This finding was not reported in either COSMIC or any published literature before.

It wasn’t clear how her father got involved, but as the senior author on the paper he made a transition from cell biophysics to genomics. He said that he wants to encourage kids to ask questions about the world around them, commenting that his daughter was always curious about the world. And that now he can come home and discuss science with his daughter (at least for a few more months until she starts this Fall at Harvard, studying computer science). He also said that parents have emailed him about their children’s interest in science, and that he encourages it.

During her acceptance, Elana pointed out a few salient points. “I was amazed how much data was available openly”, as well as the free availability of sophisticated analysis tools. We are living in an age where collaboration becomes more important than ever, and social media and communication / computer technologies all are working together for this end. Just this morning I heard a great talk from Stephen Friend of the non-profit Sage Bionetworks, and their efforts are commendable to this end, with projects like Synapse and the Dream project for breast cancer.

“So many people around the world do not know about these communities of people” (affected with the same condition), and that she receives emails constantly from different people looking for help and resources. This is where the power of a blog and affected stakeholders and individuals have such an important role to play. This recent editorial in Genetics in Medicine (open access here). By putting up information about the symptoms of their child online, and the suspected gene that was identified (NGLY1), they were able to get from an N=1 to an N=6 very quickly – through the power of a simple blog, and that blog being indexed by search engines.

For anyone involved at all with genetics and social media, that Genetics in Medicine paper is a must-read.

Elana went from cancer victim, to cancer survivor, to cancer researcher. The AACR played a super video about the Elana Simon story. you can view it here. What a story. 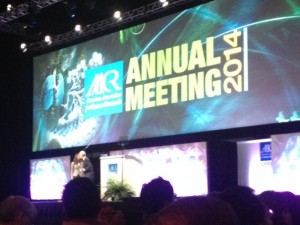