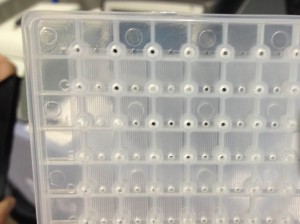 The American Society for Human Genetics 2013 Annual Meeting was held this week in Boston. Starting from Tuesday and going through Saturday, there are ancillary meetings both before and after (and Life Technologies had an Ion World event the two days prior). As one of the two ‘main event’ trade-show exhibits for the genomics tool-providers (the other being the Advances in Genome Biology and Technology in Marco Island FL every February), you can learn a lot by walking around and talking to different vendors.

Such is the case with Formulatrix. Several months ago I was visiting a large industrial biotechnology firm, and the local representative told me that I had to see ‘The Mantis‘ which he thought was a great piece of technology. I was surprised to find a small desktop device with very clever engineering that could dispense liquids in a 96-well plate in such a flexible manner.

Stopping by their booth at ASHG it was impressive to watch the Mantis in action (here’s a YouTube video for you if you haven’t seen it before), but what took me by surprise was a device that they announced the first day of ASHG. A digital PCR combination loading device and fluorescent plate reader, the consumable is a simple polypropylene 96-well plate with a grid at the bottom of each well, and there are some ports for fluids to be injected to the bottom of the baffle pattern but an adhesive layer on the underside. The system (as of ASHG they did not have a name for the device yet if I remember correctly) pierces a membrane on the top of the plate to inject a small volume (3 to 5 uL), there is a gap between the adhesive bottom and the baffle just above it containing the master mix and target sample, and the unit will seal the bottom of the plate thus subdividing the sample into 500 compartments.

I’ve written before about the QuantStudio™ 3D for digital PCR, with 20,000 datapoints per sample; why put out a system with only 500 to compete against it and the BioRad QX100/QX200, and the RainDance RainDrop?

One limitation of the QuantStudio 3D (and the others) is overall sample throughput and sample handling for larger numbers (i.e. 100’s of samples). For the 3D, 24 samples (chips) can be amplified on a single-block thermal cycler, but each sample needs to be loaded manually, one at a time; and each chip after thermal cycling needs to be read individually. The time involved for loading and for reading is not that long (a few minutes if that), but to process 96 samples that will take some time. Similar limitations exist with the other systems. (There are nuances but still the number of samples you can routinely run is on the order of 8 at a time.)

A 96-well format meets the need for a high-throughput operation to do library quantitation upfront of NGS. If you ask anyone what the most important part of the NGS workflow is, it is the library quantitation as part of the library preparation. For Ion Torrent we recommend the Qubit 2.0; an Agilent Bioanalyzer and a realtime instrument (like the QuantStudio 12K Flex) are also recommended to obtain better qualitative and quantitative data about the library. Digital PCR is a great tool for NGS library quantitation, as it gives an absolute reading of the number of target molecules in a given sample, limited only by the precision of the pipettes to create the dilution of the sample.

But here’s a major problem, in that in this platform there are only 500 partitions. Doing some digging around, I found this 2012 paper in Nucleic Acids Research that uses a 48.770 Digital Array™ IFC from Fluidigm, and includes some statistics around how many 770-partition ‘panels’ are needed for a given amount of precision for copy number analysis. Figure 5 from the Supplement had this description: “The horizontal lines correspond to the number of panels for a 48.770 digital array. Vertical lines show increments of 0.02 in the CNV to be detected”, to give you a quantitative idea of what the precision will be like when you have 500 partitions instead of 20,000. (That reference gives statistical modeling data to run your own analyses, of course beyond the scope of this author.) The practical question is how many partitions is ‘good enough precision’ for library quantitation; this person said (in the context of CNV analysis) that 2 to 3 copy number distinction needs 200 partitions while to discriminate 10 and 11, 8,000 partitions are required.

In brief then for Formulatrix, 500 partitions may fit the need for library quantitation. As of last week’s launch, they did not have any data (yet) to demonstrate its precision for this application. (Of course there is the option to use multiple wells per sample.)

According to Formulatrix, their large industrial customer had a need for high-throughput digital PCR for library quantitation, before pooling barcoded libraries, and you can imagine 1000’s of barcoded samples in a given high-throughput sequencing run. How much lower precision is an open question – a 20% variance would likely be tolerable (representing inefficient ‘wasted’ sequence capacity for those +20% over-represented samples). For what it’s worth, I’ve seen %CV variance of Bioanalyzer libraries on the order of 16%.

They did mention that their cost would be a fraction of what the per-sample cost is for the 3D, which makes sense as it is designed for high throughput.

For those who took the time to mention to me in-person last week this humble blog, my sincerest thanks that you find what I think about all of this worthy of attention. It is certainly achieving one of the goals I had set out at the beginning, which was to build connections, to reach others who I might not ordinarily come across. Your encouragement and kind words have given me a needed boost to keep at this.

Alas, though, that project to learn web programming is still something on the ‘to do’ list.