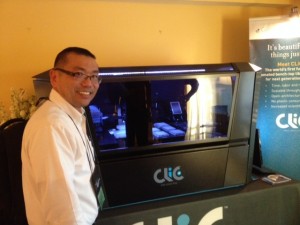 Standing in front of the CLiC LP at AGBT

One of the most interesting liquid handling technologies I’ve seen in a while was from a Limerick (Ireland) company called Gen Cell Biosystems. As a person who used to hear all about Laboratory Automation from the BioRobot™ folks in my days at QIAGEN, as well as the Society for Biomolecular Screening (SBS) also from my prior work in the protein purification and detection business (read: everything and anything about His-tagged proteins), it should not have come as a surprise that several years ago both associations merged to form the Society for Laboratory Automation and Screening (SLAS).

At SLAS2014 (Jan 18-22 2014 in San Diego CA), it came on the heels of the International Plant and Animal Genome XXII (PAG) also held in San Diego. PAG is ‘the’ genomics conference in the plant genomics world, both from a research and an applied research perspective, and there was (naturally) a large representation there from the usual assortment of life science genomics vendors.

At SLAS2014 a week later however is where GenCell Biosystems Ltd. had a booth presence, and it was at Advances in Genome Biology and Technology in Marco Island Florida a month later that they launched their first product, called the CLiC LP™ (CLiC stands for Composite Liquid Cell technology, the LP stands for Library Preparation which implies other flavors of the CLiC can and will be produced in the future).

CLiC is an interesting and useful technology, but a bit of context first. Traditional liquid handlers are provided from a variety of vendors. It can be seen as a fragmented market, with Beckman Coulter, Hamilton, Tecan, QIAGEN, and others supply robotic automation where disposable and washable tips handle samples in (mainly) a 96-well format. Disposable tips are needed to prevent cross-contamination, but add to the operating costs, as well as affect throughput. Washable tips have their place, and other technologies (for example the Kingfisher™ from Thermo Fisher Scientific) address these issues in creative ways.

Typically the lowest volumes involved are on the order of a few microliters, as below say 2-4 µL evaporation becomes a real issue. (If you haven’t done lab-work, imagine a spot of liquid about 1-2 mm in diameter, and then imagine how quickly that spot at room temperature will just become a dry mark on the surface that drop was sitting on.) So the experts in writing liquid handling programming code have to take a lot of parameters into account when modifying an existing manual protocol to an automated one.

Newer technology, such as the Advanced Liquid Logic technology out of Duke University (acquired by Illumina last summer for $96M) uses electronic cartridges to manipulate small droplets along a surface using electrowetting principles. And at AGBT from what I heard Illumina was showing their ALL-technology based system that they will launch later in 2014. The benefit of using smaller droplets in an enclosed cartridge is to reduce the reagent cost of library sample preparation, potentially increasing the throughput (if the technology is scalable) and lowering per-sample costs.

While we’re on the topic of lower-throughput (i.e. 8 to 16 samples at a time), Applied Biosystems developed a nice AB Library Builder™, worth a look for library preparation that processes 13 samples at a time. This system was developed to produce SOLiD™ libraries in 2011, and has been updated to produce Ion Torrent PGM™ and Ion Torrent Proton™ libraries (including barcoding) for both fragment DNA libraries and Ambion RNA-Seq ones as well.

But Gen Cell Biosystems has tackled the lower-volume liquid handling (down to 300 nL) without the tradeoffs of the other systems. The CLiC LP system (they have a dedicated website here) takes a innovative approach to droplet handling manipulation – insert the aqueous liquid inside a droplet of one oil, and set that on top of a different oil that isn’t miscible. So the water droplet sits inside the one but rests on top of the other. (Of course a picture is in order here, borrowed from the CLiC Technology product sheet.) 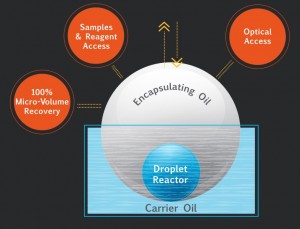 The advantages are listed in the orange circles – all of the volume is recoverable (in an elegant way – the entire oil-liquid mix is removed from the well it sits in), the liquid doesn’t come in direct contact to a surface (so cross-contamination, while still a concern, is minimized.

On top of this, take a look at how reagents are mixed via this YouTube video, in an animation entitled “How a Composite Liquid Cell Works”. The aqueous phase joins together, while the oil phases recombine.

Compared to other microfluidic platforms (for example RainDance Technologies, who I used to work for, or the before-mentioned Advanced Liquid Logic technology) an Achilles’ Heel of microfluidics is the expense of the disposable cartridges. With just two oils as the ‘consumable’, they have nanoliter-scale liquid handling without either cartridges (or disposable tips, for that matter).

But this system is not for the 8-16 samples per time as mentioned earlier – it is meant for high-throughput laboratories where the volumes are much, much higher.

The CLiC LP they showed at AGBT had two 384-well plates, so if you don’t have at least 384 samples to work with at a time this won’t be a good solution for you.

But for those in the ‘we have thousands of samples to make libraries for’ this system has a lot going for it. 768 samples for 2x 384-well plates is a lot of samples it can handle per run.

The idea of a washable-probe system may make people nervous, but there is a clearly marked “DNA clean reagent” trough for the DNA Away™ or other DNA-destroying reagent of choice (but I was told that bleach is a no-no). The upside is that there are no other consumables needed (such as tips or microfluidic cartridges).

Several items on the liquid handling deck were notable, not the least of which on the left side an interesting arrangement of changeable liquid handling ‘heads’ (one 12 format, another 96 format) along with corresponding stations for these heads to be safely ensconced in when not in use. On the right was a familiar ‘Mantis‘ micropipetting robotic arm. If you want to see the system ‘in motion’, they put together a nice animated YouTube video here.

On top of the fluidic handling, is the ability to thermal-cycle the entire plate. And on this (for a re-usable system) they went a very simple route (where simple is equated to good in my view) – an electroresistive layer on top for heating of the reusable plate, and a hookup to a refrigerated liquid for the cooling cycle on the bottom of the plate.

On the note of the flexibility of this as a platform, they put together this video of the ‘big brother’ to the CLiC LP, and I was able to locate this product sheet. The technology image (orange circles) has ‘Optical Access’, meaning the ability to interrogate analytes in the droplet via fluorescence, isn’t used for library preparation but implies a lot of interesting applications where making small volume reactions and measuring it afterwards makes sense.

As far as advances in genome technology, I’d say that high throughput liquid handling at a sub-microliter scale is a good thing. Interesting and useful to those who have such needs.