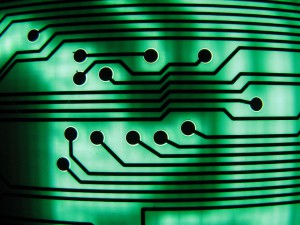 At ABRF last weekend (Association for Biomolecular Resource Facilities) not only was I able to attend George Church’s talk, but I also was able to hear Steven Roever talk about his new nanopore sequencing company, Genia, where he is CEO.

As George Church introduced him, he has an unusual background for a next-generation sequencing company – involved with encryption and Digital Rights Management in prior roles, he met Roger Chien, a Maxim semiconductor company Digital to Analog Conversion chip expert, while at a Sand Hill Road Starbucks, as Roger was reading a book about the origin of life. (I’m not sure exactly which book, but it could have been Freeman Dyson’s.) Maxim, by the way, is a 9500-strong, $2.5B revenue company.

Turned out that Roger was an analog signal to mixed digital signal expert, and was working on a Master’s degree at UC Santa Cruz as he was interested in developing the integration of semiconductor technology to nanopore sequencing, in his proverbial garage. So Steven, experienced in such things, lines up angel investors and put together a team, currently 16 employees in Mountain View.

He estimates ~1500 laboratories running multiple platforms, and 100’s of companies with uneven implementation. Their goal is to get to a <$100 test (that is, a <$100 genome) by nanopore sequencing, and they believe they can get a ~$1000 handheld reader.

He then explained the principle – a biological pore, not a solid state one, and the read DNA is pulled through a transmembrane protein. It could be an alpha-hemolysin pore in a lipid bilayer, and 120-160mV transmembrane potential will pull the DNA through it. Ionic current is blocked at varying degrees according to what base it is.

There are several challenges mentioned: how do you operationalize it? How do you set it up? How can the electronics be sensitive enough? How do you control the movement of DNA?

The key to their technology is to automate the setup of both the bilayer and the pore, by first creating an array of electrodes that are analog sensor devices. Power is turned on, and an electrical command is given to form a lipid bilayer. Their technology will then have deposited on that electrode a lipid bilayer. After that – another electrical command to insert a nanopore, which is not a random but rather directed process to the electrode. They can then electrically detect from the sensor whether the nanopore is present in the bilayer or not, by measuring open channel current.

He showed some R&D equipment of the sensor technology, one box-like thing, another one dubbed the ‘pipe bomb’ that appeared as an open steel cylinder with electronics inside. He referred to something called the ‘Axial Patch’ (possibly related to the patch clamp?)

Then to their version 1 chip – manufactured by a foundry in Taiwan – with 264 of these sensors, which they are working with now. The next iteration will have 10,000 sensors, by the end of the year will have one with 100,000 sensors. These are only 3mm x 3mm in size, the 100K one will be 1 cm2. He showed a motherboard with USB connections on it that will be the heart of a handheld reader, the chip socket on the far corner of it, and reminded us that it was designed for single-use disposable chips.

Then he went on to discuss the engineering. Analog to Digital chips are a specialty product, with only a few companies that are good at it; he mentioned Linear Technology and the aforementioned Maxim. On top of a weak analog signal is the need to have a salt electrolyte to prepare the electrode, which can delaminate the surface. Then to a picture of an alpha-hemolysin pore, with a 1.5nm constriction zone (DeGuzman Nucl. Acids Res. 2006).

He didn’t show data, but stated they are able to capture 28 distinct ‘channels’ (not sure what he meant by this), obtaining a 98% raw accuracy rate, having done 19 experiments with 2700 ‘captures’. (I presume a capture is the successful insertion of a nanopore into a lipid bilayer on the chip.) He showed a voltage slide of the standard deviation of the sensor at 30 femto-Amps, and a peak-to-trough voltage of 2 pico-Amps, thus able to distinguish 16 levels of a dinucleotide. (This sounds a lot like two-base encoding to me!)

He mentioned NABsys, IBM/Roche, and Halcyon in this context, working on similar things, and that Oxford Nanopore has a robust chemistry but a passive array with leads to an ASIC, while their technology is an array of axial patches. He described sequencing technologies as first-gen, next-gen (454, illumina, SOLiD), ‘next-next gen’ (Complete Genomics, Helicos, Pacific Biosciences, Ion Torrent) and then ‘last-gen’ (nanopore sequencing).

As an open platform, he finished with a slide showing Oxford’s nanopore on the left, and an Ion Torrent chip schematic on the right, and then a Genia logo in the middle, and claimed that Genia will be the best of both.

I wasn’t able to stay for the Q&A afterwards (would welcome a comment here below if you were there) but was able to meet Steven at a Q&A session that George held in the exhibit hall a few hours later. Who knows whether this technology will turn into the Next Big Thing in sequencing – but it is something to be sure to keep an eye on.