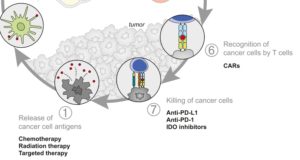 The human immune system is remarkable. When you think about the preponderance of death by infectious disease throughout history, the top two causes of death in 1900 was influenza and pneumonia, followed by tuberculosis, at 202 and 194 deaths per 100,000 individuals respectively. According to this comprehensive analysis in the New England Journal, the rate in 2010 is 16 and zero respectively.

If you take a look at the interactive feature on the New England Journal website by causes of death every decade from 1900 to 2010, the sharp decline in death by infectious disease is directly related to improved hygiene and discovery and commercialization of preventative vaccines. To put this in another way, throughout the 20th century 400 Million deaths were from smallpox, another 96 Million deaths were from measles, and whooping cough and tetanus both accounted for another 38 Million deaths apiece; all of these diseases have completely or largely eradicated through vaccination.

The complexity of the immune repertoire

And yet with all the advances with eradicating many diseases through vaccination, and with all the immunology research conducted over many decades, the immense complexity of human immunity remains to be unraveled. An effort launched last year seeks to decode many millions of individual immune repertoire sequences at Vanderbilt University in collaboration with UCSD and The J. Craig Venter Institute, called the Human Immunome Program. Starting with two individual’s white blood cells, then expanding to 100 and 1,000 volunteers, the scope of this project can be estimated by how much they are budgeting: $100,000 for every individual sample examined. Given that an entire human genome costs on the order of $1500 for 30x coverage (that’s about 90 billion bases of generated sequence information), they are budgeting 66 times that amount. The calculation, based upon $1500 per 90 gigabases, comes to 6 terabases per individual. That is a lot of sequence data, to put it mildly, to characterize the six key types immune molecule (two types of immunoglobulins, and four types of T-cell receptors); the number of unique rearrangements are in the many hundreds of thousands per individual.

This project is expected to cost $100M and take 10 years to complete. If you are healthy and interested in being one of the volunteers whose immunome will be characterized, they are recruiting volunteers in the US starting in May 2017. The Human Immunome Project is intimately related to advances in vaccine development, especially cancer vaccine development, which has been an active research area for over 40 years.

Immunology as a scientific discipline canvasses multiple diseases, including cancer. Autoimmune disorders include over 80 diseases, ranging from arthritis to Type-I diabetes to multiple sclerosis. HLA tissue matching for transplantation is a vital application saving hundreds of thousands of lives. Emerging infectious diseases with wide public health implications, such as Zika, ebola and malaria, have active vaccine development programs. There is no doubt that an effort like the Human Immunome Project will benefit 21st century healthcare on many fronts.

Given all the advances in the past century with the advent of vaccines, the 21st century has started with an explosion of cancer immunotherapy, to which next we turn our attention to.

In the late 1980’s Stephen Rosenberg at the NCI was developing a personalized therapy for metastatic melanoma, using IL-2 treatment of a melanoma patient’s own tumor-infiltrating T-cells. (Back in 2014 I heard him give a plenary talk at the American Association for Cancer Research meeting, and reviewed details of that presentation here.) This early work on cancer immunotherapy hinted at the potential of this approach in the following years: first in 1997 and 2001 with antibody therapies against the cancer cell markers CD20 and CD52 (for the blood cancers Non-Hodgkins Lymphoma and B-cell Chronic Lymphocytic Leukemia), and then against CTLA-4 for metastatic melanoma in 2011 called Yervoy / Ipilumumab (brand name / generic name). Yervoy was the first of many ‘checkpoint inhibitors’, as CTLA-4, PD-1 and PD-L1 are drug targets, when inhibited, unleash the patient’s own cell-mediated immunity to eradicate the cancer cells.

In 2008 an early clinical trial produced remission in several individuals across several cancer types, and in 2013 a study that administered anti-PD-1 antibody across 300 patients tumors shrunk by 50% or more in 31% with melanoma, 29% with kidney cancer and 17% with lung cancer. That year, the journal Science named immunotherapy the ‘Breakthrough of the Year’, and the FDA fast-tracked their approval.

In 2016, the FDA approved an antibody for bladder cancer against the Programmed cell Death Ligand 1, or PD-L1, called Tecentriq / Atezolizumab (brand name / generic name). Over the years since their respective introduction, each of these checkpoint inhibitor antibodies (now totaling four) have widened their original indications for use from melanoma and bladder cancer to lung cancer, kidney cancer, head and neck cancer, and several others.

There is palpable excitement about immunotherapy approaches. Dr. Rosenberg’s effort over decades has paid off, in that of the last 93 patients with his cell transfer immunotherapy 22% of them had a complete response 80 to 120 months later. (It should be noted that the patients chosen for his clinical trials were at the ‘end of available treatment options’ stage with severe metastatic melanoma, a highly aggressive disease.) For Yervoy, Optivo and Keytruda, these class of immunotherapies has been called ‘the most important new class of cancer drugs in a century’.

And with over $6B in sales, to state that these new cancer treatments are ‘blockbuster’ is not an overstatement. It is a fact that for many of these types of cancer that these four drugs are approved for, the survival rates after 5 years were often zero before, while with these new immunotherapies the durable (greater than five-year), progression-free survival rates are 20 to 25% as mentioned previously. The hope is that combinations of immunotherapies as first-line treatment, or combination of one immunotherapy with conventional therapies as first-line treatment, will work in concert to bring the overall five-year survival rate much higher.

The three PD-1/PD-L1 checkpoint inhibitors (Optiva, Keytruda and Tecentriq) have all been approved with an accompanying diagnostic, which is an immunohistochemistry (IHC) based test. Understand that with a particular tumor, the tissue needs to be examined for not only the presence of T-cell infiltrate defining the tumor microenvironment, but also the T-cells need to be expressing the PD-1 or the antigen-presenting cells need to have PD-L1 ligand on its surface in order for the anti-PD-1 or anti-PD-L1 therapeutic to be prescribed. Yet after years of study and investigation, the prognostic ability of the PD-1 test has been inconclusive; while sufficient for obtaining a response from a percentage of the patients, it could not predict which particular patient would respond to the therapy.

The expression of PD-1 or PD-L1 on the surface of infiltrating T-cells in this tumor microenvironment and the overall ‘mutation burden’ that patient may have is only a part of the larger role the immune system has to play with cancer overall. This cycle has been described by Daniel Chen and Ira Mellman of Genentech in 2013 wrote a review in the journal immunity titled ‘Oncology Meets Immunology: The Cancer-Immunity Cycle’.

PD-L1 status has greater promise as a prognostic marker, but among the four US FDA registered assays approved for anti-PD-L1 and anti-PD-1 therapy, three showed good concordance for presence on the tumor cells but poor concordance on the immune cells. The hunt for prognostic markers continues; there are a number of conferences devoted to the topic, such as Biomarkers and Immuno-Oncology World Congress, the Next Generation Dx Summit and the American Society for Clinical Oncology (ASCO).

Thermo Fisher Scientific along with the clinical laboratory OmniSeq LLC recently presented a webinar titled ‘Discover Potentially Predictive Immuno-Oncology Biomarkers using Next-Generation Sequencing’, available on-demand. There is a clear need for prognostic biomarkers for immunotherapy; these therapies cost the patient and healthcare system from $120K to $150K per year, and combination therapies will only add to the cost.

Are there promising biomarkers to fulfill this role? This is a question to delve into next.