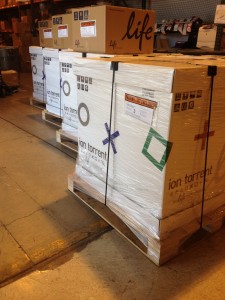 Way back when I was pouring 35S-labeled dNTP Sanger sequencing polyacrylamide gels (and fond memories of using reagents like degassed acrylamide, TEMED and Silane), robotic automation was at that time only in an industrial or manufacturing context. Now there are many automated liquid handling companies (for example Beckman is a popular choice, but Tecan and Hamilton and others share the market), and many options when it comes to setting up reactions in a 96-well format.

But when it comes to taking a single next-generation sequencing library molecule, affixing that molecule to a bead or particle (or in the case of a 5500xl Wildfire or Illumina flowcell) and then amplifying that molecule 1000’s or 100’s of thousands of times is not a trivial task. This is typically termed ‘template preparation’ – alternatively Illumina calls it ‘cluster generation’.

For the Ion Torrent PGM™ and Proton for the past few years the OneTouch™ 2 took in prepared libraries, amplified them using an emulsion polymerase chain reaction, and then broke open the emulsions. The amplified beads would then need to be enriched using a separate OneTouch™ ES, and then loaded manually onto the Ion Torrent chip of choice (314, 316 or 318 for the PGM and the PI for the Proton).

The Ion Chef™ eliminates the intermediate touch-points of OneTouch 2 to OneTouch ES to loading an Ion Torrent chip, all in one device. Humans are notoriously variable – of course there are some 3+ million genetic variations between each of us – and the less interaction with a particular sample the better, irrespective of the technology. Please note this system does not perform library preparation – you can automate an Ion AmpliSeq™ targeted enrichment amplicon library via several available 96-well format automation platforms (here’s one for the Tecan EVO 150, and information to download the one for the Perkin Elmer Janus is here). You can also automate a fragment library or an RNA-Seq library using the AB Library Builder™, and the Library Builder automation is nice for a lower throughput lab, handling 13 samples at a time.

Taking a quantitated library from ‘library to loaded chip’, the Chef incorporates a number of convenient features, such as monolithic (one-piece) reagent cartridges and plasticware, positive sample, reagent and chip tracking, and several precautions against cross-contamination.

With any liquid-handling system, what the instrument ‘thinks’ is present or absent may not reflect whether something is there or not. For example, on the Tecan systems that Illumina developed during the BeadLab days, the robots were modified with a barcode scanner on the plate handler, to identify the particular 96-well plates going through the system, and yet this scanner still could not prevent a technician from turning the plate 180°, completely ruining the run by misidentifying all of the samples. On the Chef an optical system actually scans the deck for the presence of all the reagents, consumable tips, and chips, as well as scans the chips for their unique 2D barcode. This positive identification system thus detects what item is located where on the deck at particular points in time, providing fail-safe operation.

While on the topic of instrument intelligence, the Ion Chef does have LIMS integration capability, transmitting the association between the sample ID and the chip used for the loading. (This information goes back to the Torrent Server which integrates other information about a particular run that can be queried by a LIMS.)

Cross-contamination between runs is an important concern for any NGS run, regardless of whether automation is used or not. I remember a well-regarded laboratory at the NCI using an early NGS system, and with human samples picking up a low percentage of their reads mapping to yeast. And they told me that they never work on yeast DNA in their laboratory – it turned out that the contamination was being picked up by their agarose gel boxes and incorporated into their NGS library preparations. Due to its exquisite sensitivity, anyone doing NGS has to be very careful about their laboratory hygenic practices. 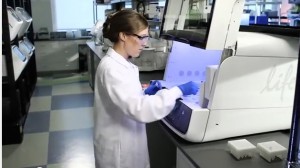 The Chef uses a UV lamp to de-contaminate the deck surface after a run, and the optical system makes sure the used plasticware is removed by the operator. Also the laminar airflow is designed to help separate the pre-amplified area from the post-amplified one. Two other design aspects include the use of disposable tips and sealing of the amplification plates and a lidded centrifuge (the centrifuge is used to seat the beads onto the chip as part of the loading process). Lastly, the liquid handling head never carries sample or reagents over other tubes, as part of its software programming design.

In terms of configuration, the Chef can process one or two chips at a time, and the initial configuration is for 200 basepair runs on the PGM 314, 316 and 318 chips. Ion Torrent expects to have the Proton PI 200 basepair in a few months (late May / early June) and PGM 400 basepair on the Ion Chef in the latter part of this year. The cost of the consumables is very comparable to the cost of the consumables for the OneTouch 2, with the time involved for the Ion Chef (for two chips) is about 10.5 hours with the current protocol (at launch).

The 10.5 hour Chef runtime needs to be put into perspective of the overall run. Given a 200bp run scenario, let’s presume a targeted sequencing run of 16 samples on the Ion Torrent AmpliSeq™ Cancer Hotspot v2 against the Illumina TruSeq Amplicon Cancer Panel™. Starting with the samples through the library preparation through template preparation through sequencing through analysis, a total elapsed time of 23.5h for the Ion Torrent PGM versus 32.5h for the Illumina MiSeq. (This calculation assumes an Ion Torrent PGM 318 chip at 200bp, and an Illumina MiSeq 2×150 bp run.) When two runs are considered (i.e. 32 samples at 16 apiece), due to the fact that loading up two chips and then running the 318 chips in succession the total time is now only 27.5h (an additional 4h for the second PGM run). The MiSeq, as the clustering and sequencing are performed on the same instrument, would take the 32.5h and another 32.5h minus the time for the library preparation (assuming 32 library samples were prepared up-front), or a total of 57h.

The one early access user of the Chef told me his favorite feature was to run it overnight, and program into the Chef when they anticipated starting their PGM runs the following day. The Chef would calculate at which time to park the system (a ‘safe mode’ pause if you will), and then automatically restart the process through chip loading, delivering the loaded chip at the appropriate time the following day.

As far as performance metrics goes, from what I’ve seen the % loading, % mapping, and aligned Q20 (A20) numbers are equivalent or better than the corresponding OneTouch 2 performance.

If you’d like to see the Chef in action, here’s a video on YouTube. Many of these systems are going out this week and next – if you have one please feel free to comment!