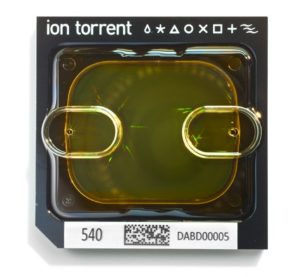 With the beginning of the influential JP Morgan Healthcare investor conference this week in San Francisco, you can expect an avalanche of news from companies large and small regarding all things therapuetic and diagnostic. With an official count of about 9,000 attendees, there are many more in San Francisco who are there to have other meetings with people there. (This is from what I’ve been told as I have not attended this conference before.)

Traditionally Illumina has used this JP Morgan (#JPM18 over Twitter) conference to announce new instruments; most recently at last year’s conference Francis deSouza announced the NovaSeq 5000 and NovaSeq 6000. Making news like this on a yearly basis means that Illumina’s competition has every incentive to also get news out about upcoming advances in their own technology. This being said, for other startup technology companies in genomics the upcoming Advances in Genome Biology and Technology (#AGBT18) is an alternate venue.

This morning Thermo Fisher Scientific announces the Ion GeneStudio S5 Series, with the newest chip (named the Ion 550) offering 50 Gb of throughput (260 million reads at 200bp) and compatibility with the other 510, 520, 530 and 540 Ion Torrent chips. (These have capacities of 3M, 6M, 20M, and 80M reads respectively on the top-end of the indicated range; see here for a handy chart of readlengths and expected throughput.)

Additionally, Thermo Fisher Scientific also announced additional Oncomine liquid biopsy and tumor mutation load content products. With a 50-gene ‘Ion Torrent Oncomine Pan-Cancer Cell-Free Assay’ they have expanded the target range; the press release indicates ‘down to 1 ng’ and with some commentary about a new HD chemistry ‘down to < 0.1% mutant allele fraction’, these two facts are simply not compatible.

I did some calculations a while ago while writing for SeraCare, and you can find these calculations here in a post entitled “How many copies are in your plasma DNA sample?”. With 10 ng of input material there are only 3 copies present out of a total number of 3000, or 0.1%. Thus with only 1 ng of input, you can only expect a 1% allele frequency detection, and that is assuming your assay has at least a 30% conversion rate and you are depending on a single mutant call.

Regardless of the input and sensitivity, the prior cell-free assays from Thermo Fisher had a limited range of targets (12 to 14 genes, for lung, breast and colon cancers respectively), and it is nice to see that they are increasing the breadth of targets in a single assay.

Recently GenomeWeb published findings from a survey titled “Illumina Remains NGS Leader But Competitors Expected to Gain” (subscription required) done in conjunction with investment bank William Blair (interesting timing given the JP Morgan conference starting up this week). A third of the respondents plan to buy a new NGS system next year, with three-fourths expecting their NGS spend to go up in the coming 2 to 3 years.

Interestingly, according to the GenomeWeb survey,

Illumina short-read NGS platforms, in particular the NovaSeq and the NextSeq, remain most popular among customers planning to buy a new sequencer, but their stated purchase plans also indicate that Qiagen, Oxford Nanopore, and Pacific Biosciences may gain market share, at the expense of Illumina and Thermo Fisher Scientific.

While expectations for overall NGS market growth are in the low double-digits (I’ve seen numbers that have a 5-year CAGR of 12%-15%), this overall number is not driven by the research market (in the low single-digit range) but rather the clinical / translational market (above 20%). Given the first NGS systems for clinical LDT use started in late 2011 / early 2012, many clinical customers in the coming few years will be in the market to refresh their systems, and Thermo Fisher’s Ion Torrent franschise has made it clear they want to be relevant to this important market segment.

With this new 550 chip and its approximate tripling the number of reads from the 540, it is much more feasible to run the kind of high read-depths required for circulating tumor DNA assays. According to what I’ve gathered from several presentations (including one from Agilent recently, and Roche’s customer presentation at AMP in November, as well as conversations with people who have used the Oncomine cfDNA assay) off-target reads are a genuine problem. It is not unusual to hear of 40% to 60% on-target rates, and an Agilent webinar from Royal Marsden NHS Foundation Trust Hospital in London actually put the off-target reads to use to look at genome-wide aneuploidy. Given the inherent inefficiency, more reads per sample will be required, and the 550 chip and >200M reads/run will help in this effort.

Of course Illumina won’t be sitting still at JP Morgan, and you can expect news about the upcoming CMOS-based Firefly this week. Nonetheless nice to see that Thermo Fisher Scientific continue to push the development of their platform.

At present there is a wide-open market for new circulating tumor DNA assays and approaches. Not only problems with getting on-target reads (which with the decreasing cost of sequencing, you can fold it into higher-throughput platforms), but there is a genuine problem with sensitivity and specificity. One glaring example that stands out in my mind is a poster presented at #AACR17 from a group at AstraZeneca in Waltham MA, where they took the same plasma samples and sent it to five different providers of circulating tumor DNA sequencing service, and came up with markedly discordant results. (You can access the abstract here from the AACR website.) Last summer, a small study was published in JAMA Oncology comparing the Guardant360 to FoundationAct, and the results were not very encouraging (to put it mildly). GenomeWeb’s commentary on this study is available here.

While there is a fear that these tests being so aggressively sold and marketed by Guardant Health and Foundation Medicine respectively may ruin the appetite by the oncologist community, the biology of ctDNA is clear enough so that the investor market sees a $29B (Piper Jaffray) market for these tests in a 10-year timeframe. Whether $14B or $29B, that is an opportunity that these two large firms (in addition to GRAIL and a host of other firms like Inivata, Personal Genome Diagnostics, Freenome, Exosome Diagnostics, the list goes on and on) will continue to put effort into refining. And add to this list, my own employer, Pillar Biosciences, putting finishing touches on an assay we’re developing for ctDNA.

Thus it isn’t too much of a surprise that Thermo Fisher would couple the development of an expanded Oncomine Pan-Cancer Cell-Free assay to an Ion 550 chip with a new instrument to handle the throughput. Expect more competition (and alternatives) in this area: QIAGEN is yet to launch their ctDNA assay (coupled with their GeneReader), and offerings for ctDNA analysis are expected from Roche (yet to launch AVENIO) and Agilent (also yet to launch).