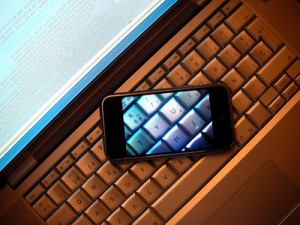 Image courtesy via Flikr by {a href="http://www.flickr.com/photos/edans/"}edans{/a}

Fast forward some 4 years later, there was a short time where I had to use a T-mobile ‘Dash’, with all of its Windows Mobile quirkiness. But it was my first smartphone, and it was something of a revelation to be able to actually have something resembling a web experience while out and about. Several Blackberries, including the BB Bold and BB Torch, were used over the next few years, and then my Torch’s screen broke.

Now, some 7 years after my first BlackBerry, I moved finally to an iPhone 4. (The 4S was a bit too expensive for my employer, and in the big picture it doesn’t matter to me all that much, no matter how much rabid iPhone fans tell me how great Siri is.) After six months with the iPhone, I have already gone through one wireless keyboard (the NUU Minikey) and have been giving the virtual keyboard a tryout.

Not comfortable banging out emails with the flat screen, it’s a real irritation not to have the tactile feedback of a real keyboard (it has been 7 years now!) hampering productivity. Not a good thing, and not too much to do about it other than working on my typing speed on smooth glass. I’ve observed only one coworker who I would deem relatively fast at typing on the iPhone screen, so I have something to work toward.

Here are few tips for you.

To quickly add special characters, such as the £ or ñ, press and hold the $ or n key respectively, and a few alternatives appear on the screen to slide and select. Finding the bullet symbol • under the dash – can make those short and concise emails that much short-er and concise-er.

If you are typing a web address int eh address bar, if it ends in .com you don’t even need to enter the ‘.com’ key; just enter the address and press the ‘go’ key. Holding down the ‘.com’ key will bring up .net, .edu, .org, and .us to save a few keystrokes there.

Take a look at your Settings → General → Keyboard Options. You can set the following settings on or off, per your preference:

I find typing in landscape mode much better than the hunt-and-peck of the portrait mode, and it is sad that my own modestly-sized thumbs are still too large to hit the letter ‘m’ accurately. Many sentences that end pre Aturely due to the proximity of the backspace and autocapitalization. Oh well.