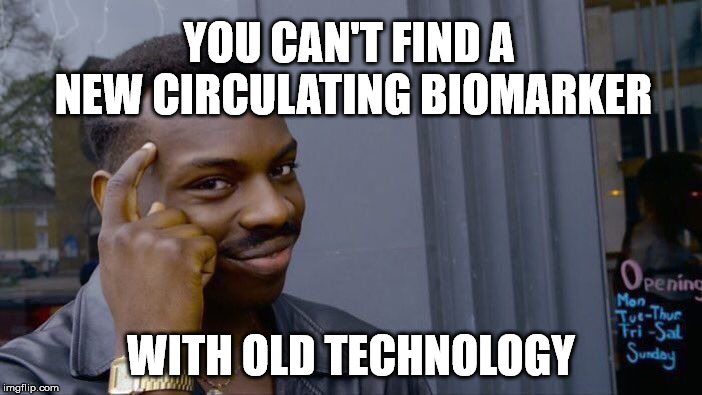 Here at the American Society for Human Genetics (#ASHG18) it has been several years since I’ve attended. The exhibit hall is as large as ever, plenty of new firms in DTC (Direct To Consumer) genomics, bioinformatics, and other technical feats are out in full-force.

The new Singlera website is now live. What has been fun about putting a new website together has been the application of new technology to tackle an old problem: how to do something better, faster, and cheaper.

Cell-free DNA is an attractive analyte

For those not too familiar with cell-free DNA, this is DNA shed from natural (or unnatural) cell death and typically is cleared from the bloodstream in a short amount of time, just a few hours. However cells are dying constantly, and are being cleared constantly.

The promise of liquid biopsy is to test blood plasma for circulating tumor DNA, and major efforts are underway from GRAIL (here’s a great piece in MIT Technology Review about their multi-billion dollar effort) and from Freenome to devise a cancer screening test from circulating DNA markers.

In addition current liquid biopsy test developers and providers for therapy choice are moving ahead. Guardant Health had a very successful IPO last week, and announced positive news just yesterday and Foundation Medicine’s liquid biopsy test (renamed FoundationOne Liquid) is fast-tracked through the FDA in their approval process as a ‘breakthrough device’.

All these large companies are looking for driver mutations indicative of cancer. For example, a gene called MET can be amplified in cancer, and detection of elevated levels of this genetic material compared to a baseline measurement of other ‘normal’ genes can give a signal that cancer is present in the individual.

Now about 140 cancer genes when mutated can drive tumorigenesis, and multiple mutations affecting these genes means the number of individual mutations (SNVs, indels, CNAs and SVs) is relatively high; nonetheless in function, TP53 as a tumor suppressor gene can be inactivated in one of a number of ways, and as a marker for cancer the TP53 de-repression is one of 140 ways cancer can occur.

These cancer gene mutations affect many other genes, and since the advent of whole-genome expression microarrays in the late 1990’s global gene expression has been studied and continues to be studied today. The methods have changed, where RNA-Seq is a major application of NGS technology, and its resolution ever finer with single-cell RNA-Seq a very popular technique.

Yet go back up a level, and think about how these genes are regulated in the cell. The Central Dogma of DNA to RNA to Protein uses de-methylation of cytosine residues as the signal for DNA to transcribe RNA from that gene.

Therefore looking at the methylation status of circulating DNA in the bloodstream will enable looking for those genes (not just the 140 key tumor driver genes, it would be many thousands of genes) that are up- or down-regulated in cancer tissue.

By looking at ctmDNA (circulating tumor methylated DNA) the ‘search space’ has gone from 140 to thousands, a 100-fold increase. Now you can ‘see’ the networks of genes going on and off; while circulating RNA markers are being pursued (Predicine is one company combining cfDNA with cfRNA analyses), methylation markers in circulating cell-free DNA offers a tantalizing new method for looking at disease signatures.

Having 100 times more markers to look at means ctmDNA has a built-in redundancy; a network signal pattern for cancer can be still recognized even though an individual node in the network is absent. It is as if a 1,400-piece puzzle has one or ten pieces missing, you still can recognize the entire overall photograph.

Hasn’t ctmDNA been measured before?

Methylation has a long history. One popular method for years was Pyrosequencing, in addition to methylation-specific real-time PCR. Microarrays such as the Illumina Infinium HumanMethylation450 BeadChip enabled a much wider scope of methylation measurements. With the advent of NGS a whole-genome method called RRBS (reduced representation bisufite sequencing) widened the scope further still, being able to analyze about 4 million CpG sites, roughly a third of all methylation sites in the genome.

Whole-genome methylation can be performed, but at a high cost in sequencing overhead as there is no genomic selection of CpG regions of interest.

With all these techniques, why hasn’t cell-free methylation been popular as a potential cancer biomarker? It comes down to the process of how methylation is measured. And there are two main technical limitations.

The first is bisulfite treatment. Turning unmodified cytosines into uracils via a chemical reaction and then read as thymidines in the sequence readout, bisulfite also heavily damages the target DNA. If you have limited amount of circulating tumor DNA to begin with, the DNA mutation may not exist at all to measure in the first place.

The second is measurement methodology. Microarrays and real-time PCR will measure single CpG bases, and lose haplotype information (i.e. strand adjacency, what the methylation status is across the same contiguous strand of DNA). Pyrosequencing and RRBS will have this information at the read-level, however in a bioinformatic processing of the data the first step typically is to throw this information away.

By measuring ctmDNA from cfDNA, Singlera has the ability to look at 20,000 (and the technology will scale) methylation haplotypes to look at the overall network of genes up- and down-regulated in the bloodstream.

A custom assay is easily designed and synthesized, and the custom assay run against a much larger set of affected and healthy tissues, to further refine the classifier, as well as the run clinical samples.

For more information about the technology, I wrote this on the Singlera site, and if you’d like to apply this technology to your unique disease- and sample-set, feel free to reach out directly. My email is in my LinkedIn profile.