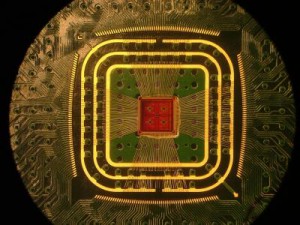 This past week I attended the Cambridge Healthtech Institute’s “Applying Next Generation Sequencing” meeting in Providence R.I. Attendance was down which is an indicator of the maturity of NGS technology, constrained travel budgets, or an oversupply of NGS conferences, and probably a combination of all three.

But nonetheless some interesting presentations were given, in particular on the second day which highlighted new NGS technologies.  And at this meeting there were a pair of presenters that are doing the electrical engineering and physics around nanoscale objects, which dig into the interface to communicate with the outside world what is happening on the molecular level (as far as determination of DNA bases goes). This might appear to be too simplistic at first glance, but single molecule sequencing depends upon fast and sensitive electronics to accurately sequence DNA to be practical.

First up was Marija Drndic of the University of Pennsylvania, who is in the Dept. of Physics there. She laid out the basis of solid state nanopore sequencing, differentiating it against protein-pore sequencing that has been recently announced by Oxford Nanopore (announced at AGBT in February). Using the solid-state nanostructure material graphene, she detects presence of a molecule in the pore via change of electrical current across the material. (Most nanomaterials are insulating, while graphene is conducting.) She showed the amount of work done by others on graphene, including knocking out single carbon atoms, which is pretty impressive.

She also mentioned recent successes published by groups this year on using protein nanopores to sequence DNA, by the Gundlach (University of Washington) and Acheson (University of California, Santa Cruz) groups. While she did not say it explicitly, the solid state approach can be argued for by its simplicity and manufacture-ability. As an engineered device, there are a lot of potential pitfalls that are avoided by not using individual proteins altogether.

She mentioned prior work done in her lab to detect 25bp DNA, 22bp RNA and tRNA at speeds from 1 to 100 molecules / second, and a collaboration with New England Biolabs to count a species of microRNA (mIR-122a) in a Nature Nanotechnology publication from 2010.  Looking over this paper, one gets the ‘science project’ feel (i.e. not quite mature) of where this technology is at present, selecting out a specific microRNA from a sample and then counting the enriched sample via the nanopore.

Other work (again from 2010) showed discrimination between 5-methyl and 5-hydroxymethyl Cytosine (5mC and 5hmC) using a nanopore, which is something that Pacific Biosciences is moving toward for a driving application for that platform. As methylation status (and other types of methylation) are very important in gene expression regulation, this is nice to see.

After getting into the details of relative thickness (I learned that a nucleotide base is spaced 0.3nm apart, and that their nanopores are 3nm wide), and manufacturing (a Si layer substrate, SiO2 layered on top of that, then SiN, then graphene on top, then TiO2 to lower the noise of the system) she showed some of the difficulties that lie ahead with regard to the speed of the DNA through their pores. DNA can translocate through a pore, but it goes by too fast for single-base detection. She then showed data at 400bp and 2.5kb DNA-length events detection, and at the beginning of the talk referred to 25bp detection; this is right about where the technology is at present.

One other detail that came up was the need for salt solutions for the DNA to reside in, and the fact that in salt ‘things go crazy’ with the electronics. The industry’s advances in electronics do not account for the presence of salt solutions.

The presentation afterwards was by Jacob Rosenstein, who at Columbia published work in Nature Methods earlier this year on an improved amplifier for detecting nanoscale signals from a nanopore device. His presentation complemented the first one nicely, in talking more about the physics the corresponding electrical limitations of our current detection systems.

I am not a physiologist, nor have taken physiological measurements in the past, but am familiar enough with the patch clamp methodology (from friends who did such work) to recognize that the electronics used for voltage measurements across membranes is decades old. (It is worthy of note that it did win its developers a Nobel in 1991.) And it came as little surprise that the current equipment being used for nanopore research is borrowed from vendors who manufacture the equipment for these physiological measurements, which is why they are simply too slow.

His custom CMOS chip with the new amplifier enables a timeframe measurement of a single molecule occupying a nanopore on the order of 1 millisecond (albeit a brief transient signal), whereas the prior equipment used could only resolve 10ms timeframes.

Another idea that was presented (difficult to present physics to a genomics and biology-minded audience), was the idea of amount of signal that can be detected from photons compared to electrons. Photon signal was described as “clean, because they are efficient, but inefficient due to signal”, and inefficient especially when trying to measure things fast. A single molecule with a fluorescent tag can produce on the order of 1000 photons per second, and when on the time-scale of a millisecond there isn’t enough photons to capture (i.e. in a span of 10 milliseconds, a single molecule will produce only 10 photons). With electrons, you can get billions of electrons per second, and thus many more electrons to measure; however, with photons there are techniques such as wavelength filters to cut out the noise, that electronic signals lack. (Thus the ‘clean’ comment about photons.)

Dr. Rosenstein went on further to compare generations of sequencing on a base per time unit dimension, based upon the technology. Optical systems (ensemble sequencing with optical detection) would take on the order of 1 base per 1 hour; that is, for the single base addition cycle plus imaging time, a 100 base-pair readlength run would take on the order of 100 hours (five days). For Ion Torrent (he named it specifically in his talk as ensemble sequencing with electronic detection) it is 1 base per 1 minute (thus a 100 base-pair readlength is about 1.5 hours). And for single molecule sequencing and optical detection, the sequence speed is 1 base per second (Pacific BioSciences runtimes are on this order). For single molecule sequencing and electrical detection, it will be faster – if the electronics can be sped up (and/or the corresponding chemistry slowed down).

Looking at the basic differences between optical and electrical sequencing, optical sequence detection offers low signal, and low noise; electrical sequence detection is high signal but high noise. A patch clamp can measure 6 million electrons per second, about 1 picoAmpere. Several sources of noise occur have colorful names:  Flicker, Thermal & Shot, Dielectic Loss, and Parasitic Capacitance. Noise will be introduced with the membrane, with the pore, and with the aqueous fluid system involved. This can give you an idea of some of the basic challenges at a fundamental level, where the development advances need to occur.

Dr. Rosenstein’s 2012 Nature Methods paper achieved 100 microsecond timeframes and 1 nanoAmpere levels of detection, and with 50bp oligos the capture event, the threading, and the diffusion events were all measured and characterized.

My own conclusion of these two talks? Based upon this work, which is the current status of solid state nanopore sequencing, is that there is another order of magnitude or two of advances to get to single-base resolution at a reasonably fast rate. Being able to detect 25 bp or 50 bp at a time is what is being shown. Whether or not nanopore sequencing using protein pores is going to be any easier remains to be seen.