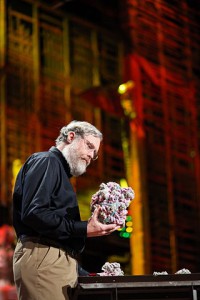 One of the great privileges of working on the marketing side of a life sciences company (compared to the sales side) is the ability to go to a lot of conferences. As a sales representative, it was a hit-or-miss affair, whether I’d be one of the ‘chosen ones’ to go to AGBT, ASHG (now called ICHG), or ABRF.

(For those who are not in genomics, AGBT = Advances in Genome Biology and Technology; ASHG = American Society for Human Genetics; ABRF = Association of Biomolecular Resource Facilities.)

And for a sales rep, it’s a difficult task; you encounter potential customers from many quarters, increasing the sales footprint for the company as a whole, but not so rewarding for your own particular territory. On top of that, you can’t participate in the science per-se, but certainly will have other opportunities to interact with the conference attendees, and glean some of the ‘take-home’ lessons second-hand, if they are so inclined to ask.

But for a marketing person, lots of freedom here to participate as an attendee, lots of fascinating science presented on the leading edge of the fields of genetics and genomics, and plenty of opportunities to interact with customers from many locales and institutions.

Anyway, at ABRF recently in Orlando FL, I had the privilege to hear George Church give a plenary talk. It had been a few years since I heard him last (it was at a 2008 Harvard School of Public Health symposium on Quantitative Biology), and true to form it was a veritable tour de force of papers that will yield insights into the workings of cell biology, immunology, and infectious disease. Here are my notes, typed up for you on my way home from Orlando.

He started with a WSJ highlight of a high school student who is spending her fourth summer in his laboratory, (‘Obsessed with genes’ is the title of the WSJ piece), who is working through the analysis of the genome sequence of four of her family members.

He then laid out the grand challenges of NGS: cost, completeness, accuracy, computation, interpretation, and then integration with synthetic biology and cell biology.

A question for the audience: is a $10 genome too cheap? After we hit the $1000 genome mark, are we finished? It costs $100 to draw blood, and then $1000 to sequence the genome, and then $1M to interpret it? Well, no not necessarily: for diabetes, a saliva test has now eliminated the $100 blood draw, now it is $1. A GPS device (he showed a screenshot of a typical navigation system) required the investment of hundreds of millions of dollars, and the intense data infrastructure needed, and now a GPS device accesses that data essentially at a cost of zero. What about validating the genome sequence data? “It can be built into the sequencing.”

As a proponent of personal genomes, there are many other ‘-omes’ to study. (He gave an aside for the PGP, with some 2400 approved applications for whole genome sequencing processed to-date, and the amount of selflessness from these pioneers.)

Slide on overall cause of death worldwide: how ‘common’ is common disease? 30% cardiovadscular, 20% infectious disease, 13% cancer. Looking further into cancer: BRCA1 then subdivides into 100’s of different types of mutations, there are many diffferent types of cancer.

And looking at a centenarian, living to 117, and a story of how she smoked for just about her entire life, eating 1kg of chocolate per week.

Another story of Sangamo Sciences’ phase II trial of a successful gene therapy, although set back from earlier failure of gene therapy. Delete both copies of CCR5 in the patient’s own blood cells via a bone marrow transplant, and then confer resistance to HIV.

To extrapolate Moore’s Law, when the human genome was sequenced in 2003 it was predicted that the $1000 genome would be reached in 2040. The street price in 2012 is about $4,000. This rate is 10x-12x the rate of Moore’s Law. A slide of 37 technology companies were shown (454/Roche, Helicos, Solexa/Illumina, SOLiD, Pacific Biosciences, Complete Genomics, Ion Torrent), and may others in different stages.

Then a slide of Complete Genomic’s approach: nanoballs on slides, 300nm features 700-1300um apart, and their CCD’s can call bases at a single pixel per base.

Kun Zhang 2006 Nature Genetics, used metaphase chromosomes. Now can do ‘in-situ sequencing’, at 10nm resolution, which is only 32bp.

In 1995, he (and several others) have a patent on nanopores. In 2009, paper by Clarke and Bayley in Nature Nanotechnology, 2010 Derrington and Gundlech in PNAS, 2012: Cherf and Akeson in Nature Biotechnology. The basic idea is to block current flow depending on the sequence of the polymer passing through.

The challenges are how many pores can you obtain? Ion Torrent uses a chip, but still needs to have fluidics and amplified material.

Thus the potential for Oxford Nanopore Technologies (ONT) and Genia. 100kb readlength potential. Is there still a place for fluorescence? Yes, for two applications: sorting and in-situ.

By sorting: whether beads, cells, or amplified molecules, you can use digital micromirror technology (like used in projection technology). (Dale’s note: it isn’t clear from my notes what he meant here, he went too fast for my brain to keep up at that point.) No stopping at a $10 genome, it will go lower in price.

By in-situ, FISSEQ: flourescent in-situ sequencing, where single base differences between transcripts can be determined in-situ and imaged. A micrograph of a multi-color labeled neuron cells – some in-situ RNA ‘slightly amplified’, and then imaged – green for one base, red for another base. (Dale’s note: this was likely an example of allele-specific expression, although he didn’t use that term.) Lee, Yang, Terry, Church et al. (Note – not clear whether this work has been published yet.)

There was a recent paper illustrating the intra-tumor hetergeneity in the NEJM (Gerlinger et al.)

The ‘Immunome’: VDG has 43 x 23 x 6 possible combinations, but there is a 0 to 145 variable stretch that is private to every individual. It is a personalized hypervariable region. There is a selection for complete proteins, as a 2/3 chance that the variable stretch will break the open reading frame. There are lots of rare antibodies – for example with HIV constant exposure – and showed an antibody structure with an 84bp insertion, with a protein loop as part of the antibody. Dejehala PNAS 2010, Balazs and Baltimore 2011 Nature.

A graph of 3 immunomes, including his own, with the flu vaccine at a given time, and different colors for different antibody signatures over time. He has had the flu vaccine many times, so his immunome didn’t have much response; however the other two were naive, and had much more H+L chain + antigen, thus determining their response. He showed work where the entire human proteome was expressed as peptides – >400K peptides! – and use phage display to determine which autoantigens are reactive. Way cool!

That was about it. My head was spinning afterwards, and while I wasn’t able to attend some of his other workshops, did catch the tail-end of a question and answer session, where one asked how he’s able to be involved in so much. In characteristic modesty, he said ‘well my only child is now 22, so I don’t have that to deal with, and it is a matter of prioritization and spending my time well’.