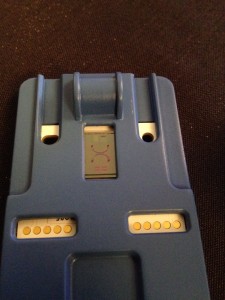 For background on genomic mapping and CNV analysis along with the competitive landscape, here are  prior pieces written previously called BioNano Genomics, Opgen and Copy Number Variation, and an update on BioNano from last Fall’s ASHG meeting. So while BioNano Genomics and OpGen both use optical mapping of single molecules, Nabsys uses electrical detection. (Cue the optical vs. digital detection methodology of Ion Torrent here).

The beauty of electrical detection is two-fold in the case of Ion Torrent: in its speed, and in its scalability. However with single molecule mapping, there are some other considerations: at that scale (DNA is 2.2 to 2.6 nm wide) optical methods are limited by the diffraction limit of light itself. For amplified beads (or clusters as the case may be) light-based systems are fine, but detecting single molecules with light is altogether different. (Thus in the case of Pacific Biosciences the Zero Mode Waveguide was developed as a ‘nanophotonic confinement chamber’ to take advantage of a particular physical property of light for detection.)

Regarding speed, Nabsys does benefit from an electrical detection system. When using fluorescence and optics the steps of taking an image, digitizing its intensity, and then quantifying those intensities to turn into a digital signal are time- and resource-intensive. Going directly from DNA to digital data is what Ion Torrent does. Last week while at Cornell-Weill, I put up a slide that had three icons: DNA, Photons, Bits, and then the next one had a big red ‘X’ over Photons (with credit to Cliff Reid, former CEO of Complete Genomics who several years ago wrote up the three-part idea in a blog post, which unfortunately has since been deleted). Going direct from DNA to bits (data) is a theme surely to be repeated in the future by other technologies in development.

Nabsys can also take advantage of leveraging of the microelectronics manufacturing infrastructure. Manufacturers of semiconductor chips supplied some $305 billion (USD) of goods in 2013, and have shown an eager desire to use existing fabrication plants for life science applications.

As examples, Combimatrix was a gene expression microarray company that used 1K and 24K dynamic random access memory chips as a microarray (they have positioned themselves for the diagnostic market); Ion Torrent uses fabrication plants to manufacture their chips; and both BioNano Genomics and Nabsys use customized photomicrolithography.

When interrogation at the single-molecule level, a benefit of Nabsys’ use of electrical detection is its solid-state nature. A nanochannel is used for the detector and electrical components are built around it, avoiding problems with manufacturing stability and manufacturing scalability, important considerations when taking a technology out of a research environment and going through the process of pilot and scale-up for commercialization.

Another interesting aspect of this technology is that it uses both fluid flow and electrical voltage to drive DNA through the channel, and the solid-state nature of the channel is advantageous. Apparently there are issues with nanopore systems regarding long DNAs passing through the pore and the long time it takes for diffusion to allow one end to enter into the pore, which limits throughput. One idea (yet to be commercialized) would be to attach some kind of chemical that can ‘hone in’ the end of the DNA molecule and orient it toward the pore, but this is definitely an active area of research to solve the problem of something called ‘slow diffusion’.

The challenge for any technology that uses semiconductors is the interface between a water-based solution and the surface properties of the semiconductor. For Ion Torrent the scale is on the micrometer to sub-micrometer scale (using amplified, templated beads) so there is a certain set of problems to deal with to get these beads into the individual wells on top of an Ion Torrent chip. However for single-molecule technologies like Nabsys there’s a whole new level of problems to tackle.

At the level of individual DNA molecules in solution within a nanochannel, surface tension and the Reynolds number have a profound effect on the motion of liquids. Here’s an article from 1976 called “Life at Low Reynolds Number” that goes through some of the physics involved. A lot of development has to go into derivatizing surfaces to handle aqueous solutions, a non-trivial task.

Nabsys is unique in that their nanochannel technology (during AGBT their CEO Barrett Bready showed an optical video of single-molecules of DNA traveling down what appeared to be a relatively huge V-shaped ‘funnel’ down to a single point) through which long DNA molecules are drawn through it, and features are detected as the DNA streams past it. It is somewhat ironic, however, that what the audience saw at AGBT was an optical video; I learned while speaking with their CSO John Oliver that he insisted on an optical method of interrogation during development of their first chip, so that they could stain and image molecules to visually ‘see’ what is happening with the fluidics.

The speed at which the DNA streams past is fast – on the order of 1MB/s. And the detector is picking up differences in capacitance across the voltage potential, which in this case is anything bound to the DNA strand larger than the size of an immunoglobulin molecule (or 150kD), in its current state of development. The nice thing about such a simple electrical detection system is in its choice of labels they can use to create DNA maps; their maps are based upon a nick-ase that can discriminate a unique 5- to 7-basepair motif, which results in a restriction-enzyme-like ordered map of single molecules that pass through the nanochannel.

Tthere are some interesting physics going on at the single-molecule level; for example, with a single 100kb-long DNA molecule entering into the pore, the initial bases pass through at a much slower pace than the later ones do, with a simultaneous increase in velocity there is less DNA ‘waiting’ to pass through the pore. This has been modeled previously in other systems, and experimentally the mathematical model has held up well. However, there is better accuracy toward the beginning of the ‘read’ at the slower velocity.

Another point is that the DNA helix isn’t completely static; there is some spring-like stretching and compressing that can occur.

Thus the maps align but with some +/- perhaps 10% along the length of the molecule, so a set of given map reads may appear like this (I’m drawing from memory here):

Example of Nabsys map, for illustration only

This map along the vertical (in red) line up the major markers (say for example a nicking endonuclease like this one from NEB, recognizing the 5-base DNA motif GCATC) and you can observe that the lines don’t exactly line up. Not really a problem, as the uniqueness of the pattern of sites and their relative spacing will map the long fragments just fine, but it does illustrate the fact that at the level of single molecules the physics of the system (including the structural rigidity of DNA) have a large impact.

Neighboring tags can be resolved if they are roughly 500bp or more apart, and the accuracy of the inter-tag distance depends on the length of that interval. (For example, if two tags are 20kb apart there could be a loss of resolution on the order of 1 or 2 kb.) Precision would increase greatly with multiple reads of the same region, i.e. ‘higher fold coverage’.

The DNA can also enter the pore in one of two orientations, but with the greater accuracy toward the end that enters first. This is an advantage where better resolution is attained by mapping strands in both directions.

Their first system that they showed at AGBT had the ability to run eight of their chips, with individual modules that held in place the Nabsys chips. They showed data that was able to discriminate between different E. coli bacterial strains easily, along with the ability to read through some difficult-to-sequence BAC clones.

The fluidics module was also very interesting – produced by 3D printing technology, complex enough not to be able to be fabricated by conventional manufacturing methods. 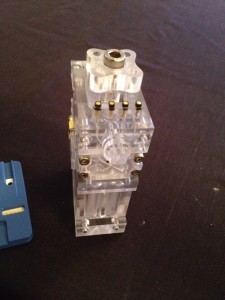 This particular part is the module the chip fits in, and these modules fit into a larger unit not unlike a 96-well automated liquid handler. Of course any time you have electronics and fluidics in the same device, there has to be a lot of creative engineering to keep the aqueous where it belongs and the electrons where they belong. (If you have ever done some home remodeling where you are shocked at how much roofing, plumbing and electrical costs, that is in order to keep water where it belongs and electricity flowing properly where it belongs as well.)

The trajectory of larger genomes as their system improves (as well as the ability to run multiple samples per chip, which is being worked on after their first iteration) means that it will be a question of scale. When asked about the interest in human genomes, I was told that “yes someone may take the ‘version 1’ and run it for months”, but I thought that that person would rather take 8 of them and have them run for weeks).

On that note this system runs continuously – the sensor keeps working as long as there’s DNA in the sample to run through the pore. It isn’t indefinite – there is degradation over time – but they can and will analyze samples for some time, which is a nice feature. Thus in terms of a ‘razors and blades’ business model (where a continuous revenue stream is realized from the sale of consumables) this will be factored into their pricing model, so customers can get a lot of use from an individual chip, and the company makes enough profit to keep shareholders (and employees) happy. If the chips are potentially reusable ad-infinitum that would be a different model than those chips that are designed for single-use.

Current plans are to launch in early-access mid-2014, with a goal of 25 to 100MB genome sizes. The potential exists for this technology to be further developed for single-molecule sequencing (i.e. single-base resolution), but for now it appears to be a viable alternative to BioNano Genomics.