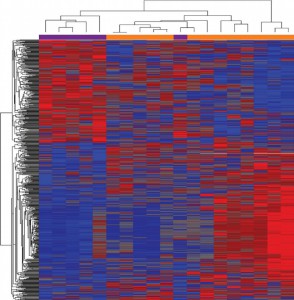 NanoString is a startup company that has commercialized a product called the nCounter™ system. It is able to take an RNA sample and look at the expression level of up to 800 genes per sample, and recent news indicates that it is in current preparation for an IPO.

Its market is the focused gene expression market, which is a subset of the microarray gene expression one. In case you aren’t familiar with this market, here’s a brief overview.

Way back in the mid 1990’s, Affymetrix burst on the scene, booking some $20M in sales in 1997 on the way to $580M in 2001. Roche was an early customer of theirs, as well as Merck. (The VP of R&D for Merck at that time, Christopher Austin who now heads the new NIH institute National Center for Advancing Translational Science, told a story once of a coveted plastic bag of very early Affymetrix chips, as they were very difficult to obtain in the early days.)

These gene expression chips began with limited gene expression content, but it was still orders of magnitude greater than the ‘homebrew’ spotted microarrays that were commonplace, with much higher quality of data. After the human genome draft was finished Affymetrix launched the Human Genome U133 chip in 2002, which had some 500,000 features interrogating 39,000 unique transcripts. At that time in 2002 the homebrew spotted arrays boosted the attendant consumables, such as plates of oligonucleotides for spotting onto derivatized glass slides and automated robots from vendors like Genomic Solutions, but it was the comprehensive (and scalable) nature of the Affymetrix technology that provided it with a decided edge, and a market-dominating position. Affymetrix offered the highest data quality and reproducibility, along with the most comprehensive content.

Before microarrays, gene expression was a low-complexity affair, with real time quantitative PCR (qPCR) being a well-established method. But to take a single sample of RNA, and get the entire mRNA transcriptome quantitated (at least according to the manufacturer’s definition of “what is a transcriptome”), was a breakthrough advance.

Since the early 2000’s there have been several attempts to get a practical competitor to interrogate subsets of genes, in a flexible and economical format. NimbleGen was founded on the idea that Affymetrix had a relatively high fixed cost in the microlithographic mask; the first Affymetrix array was very expensive but in volume the startup expense could be amortized over the volume of the chips. NimbleGen (now part of Roche) would use DLP (digital light processing, using a micromirror chip used in projection displays) for flexible mask to build an oligo array upon. (As a side-note, NimbleGen / Roche recently announced the shutting down of their microarray business.) Combimatrix, also no longer on the market, was based upon building a microarray using industry-standard 1K and 16K Dynamic Random Access Memory chips (yes the same DRAM chips that populate a memory stick for a personal computer). Illumina in 2004 launched DASL, a modification of the GoldenGate genotyping assay for SNPs, in order to interrogate expression levels, but still had the ‘startup cost’ problem that Affymetrix had, this time with batch-synthesis of an oligonucleotide pool for the specific gene probes.

More recently High Throughput Genomics molecular is chasing this focused gene set market. High Throughput Genomics molecular uses a simple primer extension and a colorimetric chemiluminescence (horseradish peroxidase), which while considered a somewhat dated technology, has a simple reader platform and up to 47 gene flexibility. The nice thing about HTG molecular is that the reader is affordable and the assay is simple, but the scalability is limited. They experienced some growth from 2007 and 2008, but have been struggling to gain additional traction. WaferGen launched a hybrid microarray with qPCR aspects in 2010, but have since struggled in the marketplace. Meanwhile the BioMark™ from Fluidigm has seen reasonable uptake, which is basically using TaqMan™ chemistry on a higher throughput microfluidic plate format.

NanoString was spun out from the Institute of Systems Biology in Seattle WA in 2003 by the renowned researcher Leroy Hood. (It was he who happened to invent and develop the first synthetic peptide synthesizer, the first protein sequencer, the first DNA oligonucleotide synthesizer, as well as the first DNA sequencer, all all commercialized by Applied Biosystems.) Based in Seattle, NanoString has received over $88M in venture capital funding over five rounds in the past 5 years.

NanoString launched a two-instrument nCounter system, whose list price was $235K. (If that sounds expensive to you, it is competitive in the price range for microarray scanners.) And their assay pricing is complicated: for their standard panels, the price / sample depends on the number of assays ordered, anywhere from 12 to 384 sample’s worth, and of course different panels have different number of genes on them, so it is difficult to come up with a simple formula to describe the pricing model. Trying to simplify it, it costs on the order of $0.50 to $1.00 per gene depending on the number of genes (higher is less expensive) and number of assays ordered (more samples is less expensive).

So for example a customer orders a Human Cancer panel of 230 genes; it will cost from $143 per sample up to $270 per sample, depending on the number of assays ordered.

The assay offers limited hands-on time (only 15 minutes per sample) – it is as simple as mixing 100ng of total RNA to a probe mixture in solution, in which a given transcript will bind to a pair of probes, one that is biotinylated (for adhesion to a readout substrate) and a second probe that has a set of seven fluors (each fluor can be one of four colors, so there are 47 or over 16K potential barcode combinations). After incubation, the hybridized product is immobilized on a substrate, washed and imaged. Thus an individual mRNA transcript is assigned a unique barcode, and other identical transcripts will have that same barcode (although since this technology is probe-specific, alternative splice variants can be discriminated against only through clever probe design). Thus by simply counting the single molecules (and the reason the scanner is expensive is that it is designed to detect single mRNA molecules bound to the seven fluor reporter probes) you can get a digital readout of the number of molecules in that individual sample.

This is very similar to what RNA-Seq does, in terms of counting RNA transcripts, except using NGS the readout is dependent upon the ability to map individual cDNA reads back to a reference genome; however one can argue that both being digital counting of RNA molecules the dynamic range (some 6 logarithms) and sensitivity of both methods are very similar to each other (and close to ‘gold standard’ TaqMan).

Having been through several changes of management and commercial team, including an 18-month stretch without a CEO, NanoString has landed two key Life Technologies people recently (a very talented VP of R&D, and a senior Director of Field Applications), and this past week named a new member to its board in possible preparation for an IPO. Having known personally several salespeople who have worked both at HTG molecular and NanoString (and all these individuals have moved on to other companies) I can say second-hand that it is a tough market to sell into.

Like NimbleGen and Combimatrix before them, the anticipated diagnostic market for focused-set gene expression simply has not matured. In 2003 Agilent Technologies, using their inkjet-printed microarray technology, set up an agreement with a Netherlands Cancer Institute spinoff company Agendia, with the publications that year in Nature and New England Journal of Medicine papers indicating that a 70-gene expression signature in breast cancer can accurately assess risk of metastasis, which in turn assists physicians determine whether the patient will benefit from aggressive chemotherapy.

Approved by the FDA in 2007 for lymph node negative breast cancer of less than 5cm (estrogen positive or negative), MammaPrint™ is the only microarray-based gene expression test. The current price for the test in the U.S. is $4,200.

There is one other gene expression based diagnostic test approved for use in the U.S., and that is the OncoType Dx™ from Genomic Health. This is a qPCR-based test (remember that qPCR doesn’t scale like microarrays do) for 21 genes, and is a diagnostic for breast cancer also. The price per sample is similar to Agendia’s, in the US at $4,150. Several other groups are in the process of development and approval, including additional tests by Agendia, Pathwork Diagnostics (expression profiling for determining the cancers of unknown primary origin), and Foundation Medicine (implementing an RNA-Seq based test).

Given the technologies available (qPCR, microarray, RNA-Seq) is there room for another platform for focused gene expression readout? Genomic Health has made it clear that they view NGS-based RNA-Seq as the future. Agilent has launched SureSelect™ for the targeted selection of focused set gene expression (although I have read a poster or two on its performance, have frankly yet to meet any customers who are looking at focused set RNA-Seq, but have heard anecdotally of a few groups wanting to tackle the method independently of how to do quantitative RNA-Seq on a subset of genes).

This past week, there was an announcement that there are now close to a million gene-expression datasets publicly available, enabling researchers like Atul Butte to publish prolifically by just mining existing datasets. So there may be additional important clinical findings that will lead to additional gene expression-based tests, that in turn will drive demand for this segment.

So don’t be too surprised to read more about NanoString in the near future – but beware that already there are many technologies chasing after this market.