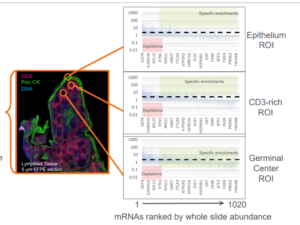 Now that another year has passed it is great to see the NanoString Digital Spatial profiling microscope near its commercial launch. The platform will be in early access to select customers in the fourth quarter of 2018, and full commercial launch in the first half of 2019. For those interested in accessing the technology, they have a technology access program for that. Here at Advances in Genome Biology and Technology the NanoString folks were kind enough to spend time with me to talk about it.

Yet first some background is in order as to why something like this is desirable. Typical immunohistochemistry may offer a handful of protein targets from a given FFPE tissue sample, and is a standard tool for the pathologist. Researchers looking at the genomics of FFPE subsections need to use a variety of methods to divide the different types of cells into appropriate compartments for protein marker, DNA or RNA analysis. One approach (as an example) is Incell Diagnostics, whose incellPREP is CE/IVD marked, and makes a single-cell suspension for downstream mRNA analysis. Others may use laser-capture microdissection (called LCM) to separate specific areas of a slide for analysis.

What NanoString does is a bit different, which is to not try and label everything and read everything in the 2-dimensional space of a tissue section. What they do is label proteins / mRNA (and eventually DNA) in-situ with antibodies or mRNA probes that have unique non-labeled DNA attached to it (as a ‘barcode’), and then interrogate the barcode with a NanoString labeled probe with a photocleavable linker.

Thus in the presence of UV light, the NanoString label will be released, and can be collected and analyzed by nCounter technology.

The Digital Spatial Profile takes this simple concept a step further, by using a Digital Micromirror device and a sipping mechanism, to precisely identify a small region to interrogate (apparently down to 15 microns) and have the UV light focused on that spot to release the probes bound at that location. Then a tiny sipping mechanism will wash up those probes from that location, and store them in a well of a plate.

By imaging the tissue section with ordinary fluorescently-labeled antibodies or nuclear stains, through their software a Photoshop-like mask can easily be generated clearly laying out regions of interest to sample. Thus at #AGBT18 NanoString showed that three specific regions from a cancer tissue sample showed dramatic differences in protein and mRNA expression; this of course is not a surprise.

By multiplexing the antibodies (can go into the dozens, they showed data), or multiplexing the mRNA probes (they’ve gone to 1,020 transcripts, and can go to whole-exome) the numerical types of the analytes being measured is not a limitation, due to the simplicity of the interrogation by the nCounter technology.

One interesting development was the ability to take off the nCounter probes, and substitute a DNA-encoded barcode instead as an identifier, and then use different sets of mRNA or antibody probes for localization in 2-D space. The sequence readout then is trivial, sequencing only two tags: one for the identification of the analyte, which antibody for example; the other for the unique position being interrogated.

At the NanoString workshop, entire protein and mRNA pathways could be elucidated from different regions of the same tissue slice. Morphologically distinct, rather than looking at the entire sample in bulk you can take a look at specific areas for particular biomarkers of interest.

I suspect this platform will enable new kinds of cancer biology from FFPE sections, and would be a great addition to the repertoire of tools to look at cancer biology at the single-cell level, for both protein and RNA as specific cell morphology in preserved tissue. In addition, it may well transform the practice of pathology, enabling traditional pathologists to access very quickly (with a tool they are very familiar with, the microscope) the latest in protein and RNA biomarker measurement.