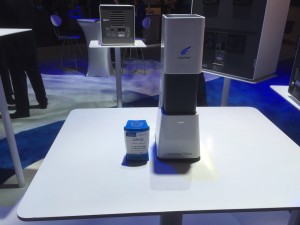 With my recent transition to the clinical market segment with SeraCare, their major  conference for the year is the American Association for Clinical Chemistry. With some 20,000 attendees, and several hundred vendors filling the Atlanta Convention Center, there were a number of interesting real-time instruments shown.

I’ll start with the most impressive and surprising of all: the Cepheid GeneXpert Omni. If you are not familiar with Cepheid, they began with a novel high-speed thermal-cycling technology over a decade ago, landing a large contract with the government to provide rapid, field-based testing of bioterror agents. A few years later they figured out how to make a real-time sample-to-answer assay in a single disposable cartridge, called the GeneXpert, positioned for the clinical market. The ‘Sample-to-answer’ part is important – the sample preparation piece usually is a separate process, involving nucleic acid purificaiton / quantitation / quality measurement, and then the appropriate amount (nominally 10ng) is placed into a reaction after.

There are other technologies that obviate the sample preparation altogether, but generally require smaller inputs, typically small-volume mammalian cells in culture that are relatively easy to lyse. One example is Ambion’s Cells-to-Ct™.

But to incorporate sample preparation of bacterial DNA or viral RNA from a sputum sample in a cartridge, and then to go onto real-time PCR, this is no easy feat. The cartridge itself needs to have an optical mechanism to monitor and measure the increase in fluorescence in real-time.

In an ordinary real-time instrument those steps of purification and assay set-up are done external to the instrument (whether an Applied Biosystems QuantStudio 12K or a BioRad CFX384). In the world of diagnostics, these steps need to be made as simple as possible, and Cepheid did it with the GeneXpert cartridge.

Designed with a circular disc at the bottom (as a liquid-handling valve so the appropriate processes takes place), ports on the top, and an optical piece that protrudes from the rear (a clever design with excitation from the top and emission measured from the bottom, on the edge of the thin window), a sample is loaded and all the above steps are handled automatically. I remember over a decade ago when the GeneXpert launched with their original reader, a large instrument that had room for two cartridges (if memory serves correctly, it must have been about 2004 or so).

At the time is launched, the GeneXpert system was for OEM providers of assays only as a development instrument. The cost per disposable assay at that time was $70 – my impression at that time was that it was very expensive piece of engineered plastic and reagents for just a single real-time assay.

Fast forward to 2015, and their presence at AACC was nothing short of remarkable. They’ve scaled the platform across cartridge numbers – the reading technology has gotten amazingly small (the size of the 1-, 2-, 4- and 16- cartridge systems are very compact, not much wider than the row of cartridges themselves), and they’ve scaled to huge ‘GeneXpert Infinity‘ 48- and 80-sample systems (that is, robotic arms take 48 or 80 samples and autoload / autoprocess for much higher throughput requirements, on the order of 1,300 and 2,000 tests/day). As far as applications, they now have 17 different clinical IVD tests, running the gamut from MSRA, CT/NG, Norovirus, C. difficile, even Ebola.

Their lowest-throughput system, a 1-cartridge unit, costs in the ‘tens of thousands’ of dollars, and not that much less than a 2-cartridge one (so many customers prefer that configuration). And before the Monday of the conference, no one in the field organization at Cepheid knew about a new product they were to announce, one that would surprise and impress me: the GeneXpert Omni.

This system is designed for point of care – its tiny, only 9.1″ high x 3.0″ wide x 42″ deep. Not much wider than a GeneXpert cartridge itself, weighing only 2.2lbs, it will run on batteries (4h internal, additional 12h with an external pack), and runs on the same cartridge system as all the rest of their product line.

I can easily imagine this in an emergency room setting, in a local pharmacy, or out in a resource-poor region of the developing world. At only 15 minutes from sample-to-answer, it doesn’t need any other computing power other than what comes with the instrument – a smartphone with an app. (Their promotional literature has what appears to be an iPhone 5, with the ‘old style’ Apple 30-pin connector.) I was told that the smartphone came with the instrument, their specification indicates ‘1x Mobile Device’ and the instrument communicates via wireless, likely Bluetooth.

Before I saw the GeneXpert Omni system, I was duly impressed with a UK company called Primerdesign LLC that had an $8,000 real-time instrument. A few hours later I encountered a Beijing China-based firm called Coyotebio with a battery-operated real-time instrument that only cost $6,500. Here are a few snapshots I took of them. 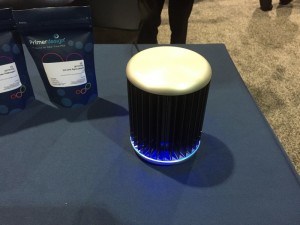 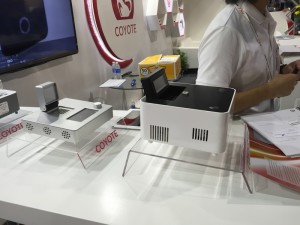 Seeing these systems before the GeneXpert Omni (I was working the huge exhibit hall in reverse numerical order, since SeraCare’s booth was on the far side) it was impressive that the Primerdesign UK system was so compact – about ten inches high – and the colored LED lighting up the bottom indicated steps in the process, which was pretty neat. The Coyotebio’s forte was not only price but the portable, battery-operated nature of the system.

The GeneXpert Omni already has competition, from no less a company than Roche Diagnostics. They had also introduced a small system designed for point-of-care, around the same two assays (Staph and influenza), with a system they call ‘Lab-In-A-Tube’ or LIAT for short. This technology was developed by a company Iquum and acquired by Roche in 2014, and this system is very small. (No photos were allowed to be taken of the unit, by the way.)

And the LIAT system is also very fast, 15 minutes from sample-to-answer. A cartridge (about 1.5″ wide x 8″ long x 0.25″ deep) has about 10 clear pouches in a row, each with different reagents in them. (Some were colored, and one was very dark, likely magnetic beads in suspension.) This cartridge fit into an outside case that had a barcode. The analyzer, about the size of a QuantStudio 3D System (alas the Roche representatives would not allow photographs), has a barcode scanner in front of it for sample scanning, cartridge scanning, and operator scanning, and when it ran it flipped through its operations very quickly.

Their first test  are the first of an expected line of future tests for the point-of-care diagnostics market. Here’s a 2010 publication of an HIV load test using the IQuum technology, with an 88-minute run-time and an LOD of 57 copies/mL.

Getting back to Cepheid, their booth was nothing short of awesome. Some described it as ‘spooky’ seeing life-size mannequins in different settings. It reminded me of Disneyland’s “Carousel of Progress” instead, not only illustrating the future of point-of-care, but also the future of marketing. Human actors on video in the background, mannequins in the foreground that look just like them, and in a few years these will be animatronic and interactive. 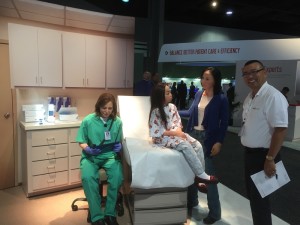 Mannequins in the Cepheid booth at #AACC2015

Take a look also at this YouTube video. Great stuff, the future of point-of-care for molecular diagnostics.