Skip to content
Home » Careers » A new role, a new team and a new blog

“You’ve got to be very careful if you don’t know where you’re going, because you might not get there.” – Yogi Berra 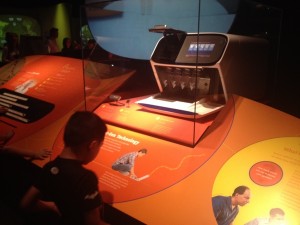 The Ion Proton at the Smithsonian ‘Code of Life’, F1 generation in the foreground.

Two years ago when I started this blog I had a few goals – one was to educate and inform, another to build connections, and a third to initiate conversation. In that relatively short timeframe these goals have been fulfilled way past what I originally anticipated, in particular how many folks do read what it out there, you just don’t know exactly who it is until they casually mention it.

I had little idea then that this venture would lead to my next position; but there was a clear recognition within the marketing leadership of my organization of a genuine business need. (By the way, by ‘my organization’ I mean the Genetic Systems Division of Thermo Fisher Scientific, that includes both Ion Torrent® next generation sequencing, TaqMan™ real-time PCR instruments, assays and probes, as well as the Sanger capillary sequencing systems.)

Search engine optimization and search engine marketing have changed enormously within only the last three to five years. You have certainly noticed in how you use search on a daily basis that not only has search gotten better (gone for several years are the useless ‘link farm’ pages that would clutter results thanks to better algorithms such as Google’s project Caffeine in 2010) but also personalization is everywhere.

On top of this is the slow decline of the effectiveness of email. Everyone has newsletters that are no longer read and unsubscribed to, and yet there are a few that are opened up every time (that is until your interests, or your needs change). And when was the last time you clicked on a banner advertisement, or typed in a URL from a mailer or other print advertisement? (Okay, I do admit to using a novel Twitter hashtag on a chance occasion, or perhaps a Nature Focus article, but the most common for me is to use a DOI record to look up a publication from a printout, frankly.)

One of the lessons I’ve learned firsthand for the value of writing up a post is the power of search to find that very specific information. Did you realize that a full 15% of Google search terms on any given day have never been searched before? Senior Life Technologies executives have ‘discovered’ who I am by searching for very specific information; one told me he was looking for additional information about immune repertoire sequencing, and found this.

In this new role I’ll be involved in launching a blog on May 27th we’re calling ‘Science Served’; conducting two-way video interviews that we’ll upload to YouTube we are calling the ‘Lab Chat’; live-tweeting (and blog posting) from conferences of interest (thus I’ll be attending meetings such as the upcoming ESHG and some others this summer); contributing to Life Technologies and Thermo Fisher Scientific’s social media channels; as well as several of my prior duties that include training salespeople and giving the occasional talk (if you happen to be at Dartmouth that’s up next on May 27th).

All this material helps people discover (and share) interesting things; find what they want on-demand (via search but also through social media); and approach Life Technologies / Thermo Fisher Scientific not as some behemoth, faceless and nameless organization, but as the group of approachable, professional and helpful individuals that we are.

Regarding my own plans for this blog, I will continue to write for it, however in this blurring of the professional and personal I will need to think about what will appear at Science Served versus in this space. Many thanks to all who expressed your support through LinkedIn (and there were a lot of you!)

For you scientists wanting to get started with social media, I’ll conclude with a reference for you: An Introduction to Social Media for Scientists, from PLOS Biology 2013.