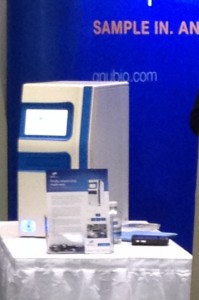 The GnuBIO’s new sequencer at ASHG

There are two next-generation sequencing ‘platforms’ (i.e. systems) that are being prepared for commercial launch; one from QIAGEN (that I wrote about here and I was told at ASHG that they working hard to launch it in 2014), and another from GnuBIO. This technology came out of the same laboratory that RainDance Technologies’ emulsion droplets came out of (David Weitz’ ‘squishy physics’ laboratory), and it applies the microfluidic principle to sequencing chemistry on a picoliter scale.

GnuBIO had one of their systems in the booth, along with a microfluidic cartridge. It had stickers on it (indicating where the different sample-handling processes were being performed), and it appeared to be made of a polycarbonite material with some additional electronic traces. (The RainDance microfluidic droplets for their targeted selection NGS application makes use of a brief electronic pulse in order to ‘merge’ droplets together.) Alas the booth staff did not allow me to take a picture of their cartridge, but here’s a link to a photo of one being loaded into their system from their website.

This cartridge does all the sequencing as a PCR-based assay. Imagine three reservoirs of reagents: one with droplets of discrete primer-pairs against particular amplicons of interest (whether KRAS, BRAF, IDH1 or what-have-you) as a single-plex PCR that also contains a master mix of dNTPs, buffer and polyerase. The second reservoir has your input genomic DNA (their materials do not specify what the input amount is, but you can assume it is about a microgram or so that have been sheared appropriately to 1kb to reduce the viscosity of the sample).

These first two are combined, and then travel through a serpentine area where the droplets are thermal-cycled. (Looking at the plate, it appears to be a two-step PCR, going from hot to hotter regions, similar to what the original OneTouch did for Ion Torrent template preparation.) Their poster at ASHG calls this amplified droplet a ‘slug’, and this droplet is then further subdivided by injection into thousands of individual probe mini-droplets. (The individual probe mini-droplets comprise the third, and final, reservoir.)

From what I could determine from speaking with company representatives and their poster, each of these mini-droplets of probes have a single type of hexamer, and use an extension assay to determine whether that particular hexamer sequence is present or absent in a given amplicon. (4)6 is the number of all possible six-mer probes needed, which calculates out to 4096 probes. In order to insure that all 4096 probes are represented at least once (you will need to get adequate ‘coverage’ of all possible six-mer bases), that would require a high multiple of 4096 mini-droplets per each ‘slug’ droplet. (As an aside, the term ‘slug’ needs to be re-named by GnuBIO, perhaps ‘amplicon source’ or ‘template master’ or something along those lines.) It would be safe to assume that this multiple of 4096 to get at least 3 or 5 of each type of probe would be on the order of 10x or perhaps 15x (if anyone wants to run some Poisson statistics on these numbers do feel free to make a comment). Thus the number of individual interrogation of ‘template master’ sub-droplets plus the probes is on the order of 10’s of thousands per amplicon.

Each amplicon from the template master (okay I’m using my own term here), has on one terminal end a fluor / quencher pair. The assay is setup in this combined template master / single hexamer sub-droplet that includes a DNA polymerase and master mix, and incubated. (This step may need two different temperatures, one for denaturing the PCR template master molecules, and then another for annealing of the specific hexamer and extension. Should a unique hexamer probe bind to a given complementary six-base target on the template master, a displacement reaction occurs in the presence of the DNA polymerase, which releases the quencher bound to the fluor. This fluorescence is then detected as that six-base hexamer is marked ‘present’ on that subdroplet.

There is a scheme of using combination of dyes to deconvolute which of 4096 hexamer probes are present / absent. It appears that each fluor / quencher pair on the template master is generic for present / absent signal, but that the hexamer probe itself uses a combination of dyes to identify it uniquely, and this is where the technology isn’t very well elucidated. There was a figure on the poster that was a 2-dimentional plot of discrete fluor combinations; it is likely it comprises two dyes and relative concentrations between the two, not unlike how the original Luminex beads worked with two dyes and intensity. I would invite comments on this point.

Their poster indicated 80 to 158bp readlengths at a ~Q42 accuracy on a per-probe level, and “>Q53” on a per-base level (“99.999%”), an ongoing collaboration with the City of Hope in Duarte CA, a total run time of 4h, and an expected system price on the order of $50K USD with a per-run cost of about $200 USD. They expect the read-lengths using this method to get to 1000 nucleotides, and since it is just a primer-extension to the end of an amplicon (in order to displace the quencher) appears to be achievable. A few weeks ago at a different conference a 50-gene panel would cost $50 per sample, presumably 4 samples per run.

The expected commercial launch of this instrument is the summer or fall of 2014.

My own opinion of microfluidic technology (and granted I do work for a competitor platform, the Ion Torrent PGM, at Life Technologies) is that it is promising for encapsulating reagents in very small volumes; witness the use of microfluidic droplets for the BioRad and RainDance digital PCR applications. Regarding GnuBIO, the number of droplets that would require analysis would be very high per amplicon, thus limiting the overall throughput (even though the speed of analyzing these droplets are on the order of 1000 per second on the instrument). Nonetheless they are promising sub-four hour runs, and able to perform on-instrument analysis as the sample data comes through.

The speed and workflow do sound promising (no separate library or template preparation needed), but there is a simple technical hurdle that remains in my thinking – is the cartridge they developed up to the task (clogging of the lines is not an insignficant problem), and are the fluidic pumps fast enough? It is not unusual for new technology to push the limit of available components that comprise it. (In the early days of Solexa I remember speaking with a vendor of laser components, and they told me a number of things that Solexa was doing with their products that they were not designed to do, but worked well-enough anyway for what it needed to do. This is true for a lot of development work, repurposing components across the board.)

And with any startup (they have about 60 employees as of this writing), there is another question of reliability and local support, which is not insignificant questions for any new approach.

So there’s QIAGEN’s GeneReader in progress, the GnuBIO ‘Desktop Sequencer’ next summer or fall, and of course Oxford Nanopore Technologies announcing early access of their MinION starting in late November. Busy times!