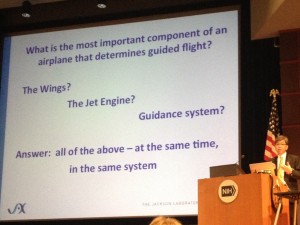 Living in the Washington DC area is a privilege. As a native Californian who has been on the East Coast for about 7 years now, living in the Mid-Atlantic has been so enjoyable for many professional and personal reasons.

A case in point is proximity to the National Institutes of Health, and last week I had the opportunity to attend the NCI’s Third Symposium on Translational Genomics. With speakers like Edison Liu (the leader of the new Jackson Laboratory personalized medicine center in CT founded in 2011 with $1.1B in public and private funding), George Church (who I haven’t heard in-person since the 2012 AGBT meeting), and others who I have personally interacted with at the NCI in the past (Snorri Thorgeirsson, Louis Staudt and Jean Claude Zenklusen), I knew that this meeting was going to be worth attending.

I’d like to point out two talks in particular that were noteworthy, and highlight some of their work here. (If you want to see the complete set of notes that I took, I’ve archived the list of tweets from this meeting here in reverse chronological order.)

One surprising talk was from Thea Tlsty from UCSF, who presented work she published in PNAS, who titled her talk “Stochastic Cellular States Associated with Malignancy”. (I figured that any talk with the term ‘stochastic’ in it will be worthwhile.) She began with the statement that one source of cancer heterogeneity would be non-mutagenic processes caused by physical and chemical stresses in the tumor microenvironment, and this exhibits characteristics of a complex, adaptive system that is self-organizing and a system that learns over time.

In particular while looking at the differences between estrogen receptor positive and estrogen receptor negative cancer cells, there is a spectrum of resistance , with transcription levels, protein levels, degradation rates, protein modification rates all fluctuating. This led to examination of p16INK4a, a tumor suppressor protein that regulates cell cycle. Cells that have the p16INK4a gene repressed is associated with the acquisition of a plastic state.

Two markers showed two surface markers toggled by p16INK4a in opposite directions, called CD73 and CD90. When CD73+/CD90- cells were isolated by FACS from primary tissue (called R1, in contrast to CD73-/CD90-, CD73-/CD90+ and CD73+/CD90+ fractions R2-R4), these were naturally-occurring repressed p16INK4a cells that comprise about 0.16% of the cell population.

These R1 cells could recapitulate the human mammary gland in a murine host; they could produce glial and neural progenitor cells; they could produce adipose tissue with adipose cell-specific genes expressed. They can also differentiate into CD31+ HUVEC cells (human umbilical vein endothelial cells), and even into cardiomyocytes. (She showed a video of the beating muscle cells in vitro.)

Their group also showed the production of an endodermal line with characteristic markers SOX17 and FOXA2 according to published stem-cell protocols, and that these cells could create teratomas but were not cancerous. This is all in contrast to the R2-R4 cell populations.

She calls these endogenous Plastic Somatic cells (ePS), as they will differentiate but are mortal and normal in genome organization via karyotyping, and have been found in other tissues such as pancreas and esophagus. These ‘reserve cells’ are hypothesized to play a role in wound healing, fit all the criteria set out in this Cell reference from 2004, and express the same pluripotency markers Oct 3/4, Sox2 and Nanog.

She suggested that these cells could have a role in regenerative medicine. It was fascinating to hear about this paper, published in 2013 and the PubMed reference is here. Amazing to think about how a certain line of inquiry can lead to an unexpected finding.

The second noteworthy talk was from Peggy Farnham from the University of Southern California. Her talk, entitled “Using GWAS, Epigenomics, and Genome Engineering to Characterize Cancer-Associated Enhancers”, focused on colorectal cancer, which kills about 135K in the US annually, and an estimated 50K deaths.

She looked at risk alleles identified by GWAS, and then looked for enhancer elements in high linkage disequilibrium with these tag-SNPs that may act as a molecular ‘toggle switch’. She mentioned the ENCODE findings (Nature 2012) that only 27% of enhancers affect their adjacent gene, and that enhancers are naturally difficult to study due to their lack of orientation (they work in either direction); they also can have long-distance effects and in some instances even across chromosomes. Over 90% of the SNPs identified by GWAS to be risk alleles are in non-coding regions (on the order of 93%).

So she looked at the H3K27Ac histone acetylation mark as a marker of enhancer function in the regions where she had identified the CRC risk-allele SNPs in a cell line HCT116. She then used a BioConductor tool called FunciSNP to connect the H3K27Ac peaks to her risk-allele SNPs. Going from 116K risk-allele SNPs, many SNPs were in low linkage disequilibrium, but there were others that clustered together.

Looking at statistical r2 correlations, she had a number of interesting (and apparently yet-to-be published, so I’m reluctant to elaborate further here). But the statistical work is very similar in the CRC example she was presenting to this work (published only in January in PLoS Genet.) on prostate cancer, where 88% of 727 putative functional enhancer SNPs were determined to be in putative enhancer regions.

But the prior prostate cancer work mentions functional knockout via TALENs or CRISPR technology in the conclusion, and this is where she is taking her CRC work. (For more information about these, here are the respective webpages for TALENs and CRISPR.)

Farnham used both technologies to generate enhancer deletions, and validated these deletions via ChIP-PCR, and then performed RNA-Seq and 3C and 4C analysis to show its effect on transcription. (3C and 4C are methods of examining chromosome organization, called chromosome conformation capture). She was able to show expression data for a given enhancer, compare the promoter and enhancer marks, and then overlaid the ENCODE ChIP-Seq data on top of all that. It turned out that none of the nearby genes were affected by the deleted enhancers; the effects were felt in genes 2MB to 6.5MB away, with several operating cross-chromosome.

This work illustrates several powerful technologies working in concert to elucidate enhancer function and its role in disease. First the groundwork laid by GWAS to identify the 116K risk allele SNPs in the first place, then statistical methods to narrow that list down to a workable number. Then she took that workable number and engineered functional knockouts, and then looked at their effect on transcription of these enhancers genome-wide.

Lastly she then will engineer a ‘toggle switch’ using more genome engineering; instead of deleting these enhancer SNPs associated with colorectal cancer, engineer these enhancer regions with a methyl-transferase DNMT3a and a zinc finger nuclease in order to look at the impact of these enhancers genome-wide. (I’ll be sure to be on the lookout for this paper and edit this post at that time.)