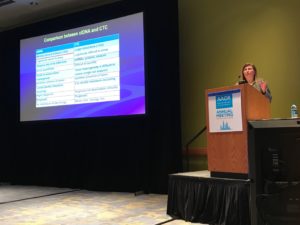 Dr. Evi Lianidou presenting on CTCs and ctDNA at #AACR18

It is something of a tradition for me to give some reviews of notable presentations from past AACR conferences. For example, here’s one that I did while at SeraCare for #AACR16, here’s one from #AACR15, and another one here from #AACR14. (Briefly looking for highlights from 2017, well it looks like something is remiss!)

I’ve had people tell me that sometimes they don’t feel so bad not attending a conference, they’ll just read my notes and observations. Of course a given conference encompasseses much, much more than that; however taking the time to review notes and think about some of the work presented a few days later can do wonders for consolidating all that learning.

As one of over 600 (or was it 700?) exhibitors at AACR (here’s a full PDF listing if you’re interested) there was plenty of competition among the general sessions and five different poster sessions occuring simultaneously. More than in other years, it seemed as if there were many things competing for attention.

Pillar Biosciences presented a poster entitled “Application of ONCOREVEAL Lung & Colon Cancer Panel in CRC samples and effect of DNA damage in FFPE samples”, presented by an affiliate company in Shanghai called Zhengu Biosciences Ltd, that looked at over 200 samples analyzed by the Pillar Biosciences Lung and Colon Cancer Panel. If you aren’t familiar with the SLIMamp that enables 2% VAF from FFPE, take a look at their PCR enrichment technology here. Yours truly asked the presenter for an interview, and here’s a YouTube video interview with Dr. Jianfeng Xiao describing his results.

On the morning of the first day, even before the main plenary session, Dr. Evi Lianidou (pictured) in a ‘meet the expert’ session gave a comprehensive overview called ‘CTC characterization and applications’, comprehensive in its coverage of the latest CTC work across tumor types. For a place to start, she called this 2004 CellSearch / metastatic breast cancer (mBC) paper ‘seminal’, and went from there to the importance of ESR1 gene in CTCs from recent work. (I noted several popular posters looking at ESR1 in further detail for mBC.) She pointed to this interesting work using both ctDNA analysis from the Guardant360 test and CellSearch enumeration, illustrating the complementary nature of these technologies.

Regarding technology development, she did not have time to go into too many details but what was clear to me was the amount of new publications looking at single-cell analysis indicates a lot of work is ongoing. Here’s a reference that uses Silicon Biosystems’ DEPArray followed by copy-number analysis. And here’s a protein analysis paper that looks at single-cell Western Blotting (!). One interesting paper looked at breast cancer that metastasized to brain, combining CTC enrichment with extracellular vessicle (EV) RNA-Seq to look for a signature there.

She emphasized the complementary nature of CTCs with ctDNA analysis, a theme that was to continue throughout the posters, a plenary talk, and an evening symposium.

For those not familiar with Inivata, this technology was first developed at Cancer Research UK (CRUK) and published as a ‘TAm-Seq’ technique, which stood for Tagged-Amplicon, way back in 2012 in Science Translational Medicine.

Dr. Sam Woodhouse called his talk “Analytical validation of InVisionFirst, high-sensitivity broad molecular profiling of ctDNA”, and points out that hybridization-based approaches use A-tailing, which he claims is ‘only 51% efficient’; also ligation introduces compounding inefficiency. Inivata has optimized a specific amplicon-based method, that detects fusions, CNVs, SNVs, and indels.

40% of ctDNA is below 1% allele fraction in NSCLC – not sure of the exact reference but believe it was this one examining T790M resistance mutations for Osimertinib (3rd-generation TKI) using the Inivata InVisionFirst assay. As was pointed out to me over Twitter, context is very important when evaluating a given circulating tumor DNA mutation.

They use 69,000x depth, and showed very high ddPCR and NGS allele fraction concordance, in addition to SNV detection down to 0.006%. By cross-comparing results from 109 healthy individuals (cross-operators, cross-reagent lots, cross-days) they observed 99.997% concordance for SNVs, and 18 indels 1-24 bp.

For their fusion sensitivity, showed 0.125% for both ROS1-SLC34A2 and ALK-EML4. Regarding fusions, they synthesized all known published ones as contrived material, as well as other random intronic breakpoints as their assay is DNA-based. Among a large set (he didn’t specify how many but it had to be several dozen) only one failed to be detected. Orthogonal detection via ddPCR failed at only 2 copies (i.e. NGS detected while ddPCR failed).

Last month their analytical validation study was published here in PLOS One for further details. 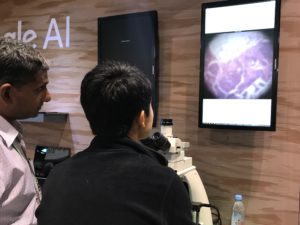 One of the more interesting plenary talks was from Google. I’ve shared here what Google presented in 2014 – at the Human Genetics meeting where they look at tools like Dremel to construct large analytical toolsets for examination of GWAS and PheWAS studies, and thought perhaps they would continue down that line, or perhaps pursue something akin to IBM Watson.

I was pleasantly surprised that they are tackling image recognition for digital pathology, by taking a 15 gigapixel slide image (yes you have that right, equivalent to 1,000 DSLR photos) and dividing it into some 15,000 megapixel tiles, using AI to distinguish between cancerous and non-cancerous tissue, and then overlay using Augmented Reality (AR) over the same field a pathologist would use, all in real-time.

I took a look at the AR functionality myself at their exhibit, and was impressed how the image would update in real-time.

Jason Hipp and Martin Stumpe gave a joint talk, one on the biology and the other on the hardware integration. Their talk pointed out how hard it is to see metastases in breast cancer lymph nodes, as well as assigning consistent Gleason scores to metastatic prostate cancer.

Bringing the AI to the microscope, they were able to show this video (on YouTube, of course!) to emphasize their point.

One great set of talks was by the ‘Dream Team’ participants in the Stand Up to Cancer session (SU2C on Twitter, SU2C website). Absolutely top-notch cancer researchers and top-notch work across Ovarian and Colorectal cancers, along with precision biomarker development.

This year I made a special emphasis to scour the poster sessions; each presenter only had a 4-hour timeframe, where the posters go up and come down the same day. It was notable that there were six liquid biopsy poster sections in only five sessions – it was that popular. Of course immunotherapy is a major secular movement in the cancer treatment world, and the hunt for biomarkers continues.

There were other outstanding talks that I’ll consider expanding upon in a future post. 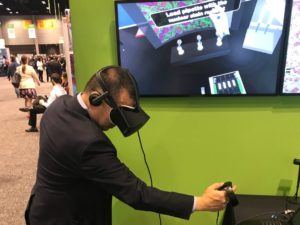 Regarding exhibits, I thought that NanoString did an outstanding job in communicating the benefits of their Digital Spatial Profiling system (I wrote it up here) through use of VR. In the photo I am manipulating a PipetteMan in virtual space, and eventually get transported to the surface of the slide, and then ‘sipped’ up from the slide surface into the analysis plate.