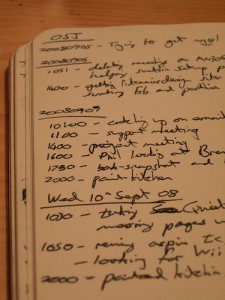 This week my great employer sent me (no sarcasm here, the amount invested in training is remarkable) to an email management training course. (It was The Effective Edge, an outfit out of Austin Texas in case you were wondering.)

Now I’ve been on Outlook since, oh, 1999 or so, and had no idea that the 2007 version (and a colleague was running a 5-year old laptop with 2003 still on it) had so many useful tools for task management. The last hour was spent getting to ‘Inbox Zero‘, and while I have still some work to do, went from 1009 emails in my inbox to a much more manageable zero. (The ‘more work to do’ refers to the fact that I need to go back to the last two week’s of archived emails and review them for additional actions / tasks to assign myself; there are probably 10 or 15 more items to cover.)

Without going into too much detail, the technique does not rely on flags, it relies upon setting up the task pane with categories and training about workflow, turning emails into a task on the ‘Actions’ category, or assigning an email to a task in the ‘Reading’ category. It is like I had a two-speed bicycle before (Outlook as an email and calendaring application) and now I’ve got a 10-speed. Much more than a task list, now I have dates, alarms, and a prioritized ‘Outlook Today’ screen that greets me with today’s items of import.

As a Franklin Covey devotee (I’ve been using a paper-based Franklin Planner since the late 1980’s, believe it or not), having the Tasks in Outlook replace my daily ‘to-do’ list, with its integration, is great. I’m now flipping over, having ignored all the Franklin Covey attempts at integrating the paper planner with their own software.

What will come of my own paper planner? It will remain my repository of written notes, and a convenient all-in-one location for my journals, finances, goals and receipts. (Being on the road a lot, there are a ton of receipts, but even that is changing as I’ve been told there are great iOS apps that integrate with our expense reporting systems.)

And on top of great desktop Outlook ability to keep track of projects, actions, to-read later, etc. via the Tasks, is the iOS app ‘iMExchange 2‘ which syncs all your tasks with the corporate Microsoft Exchange Server, so I can just check of stuff as I’m mobile, or check stuff off as I’m at my desk, and everything stays up-to-date. (The app is even free.)

A colleague and I were at the United Club lounge in Phoenix, waiting for our flights home last night, and both of us were joyful with glee at how well it all worked together. It’s been a while since I’ve had a bump in productivity like this, and am convinced that this is ‘the’ method of organizing all the multitude of information overload with voicemails, emails, and an avalanche of great stuff to read.

One thought on “Outlook’s Tasks is an amazing productivity tool”