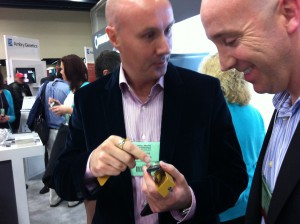 Here at ASHG 2012 in San Francisco this week, a ton of activity around the exhibitors, and Life Technologies does not disappoint with the Ion Bus on the show floor, an open 20 foot x 30 foot booth, a new digital PCR instrument (the QuantStudio 3D) introduced, two luncheon workshops, an Ion Torrent User Group meeting, a special SF Museum of Modern Art event on one evening, and an Ion Lounge evening event on the other. (These last two events were described internally as ‘networking only’, which is a code-word for a great social event.)

As one of the crew involved with these events you can describe my feelings this Friday morning of this conference as one of exhaustion, but on the other hand the time and effort was well-spent.

On the first day of the show, it was clear that not only did Oxford Nanopore have a booth, but a very attractive presence on the show floor, and two former colleagues who I visited with briefly before they were swamped with customers. But visiting a bit later I was able to snap a picture of Clive Brown, a company founder, along with a colleague of mine Matt Hickenbothom (on the right), showing the minION unit in a removable case. About half the width of an iPhone but about double the thickness, I noticed a miniUSB port on one side, some interesting fluidic channels on the back and an electronic board with a small fan on the front.

Later that day I met a customer on the Ion Bus, who was doing some interesting work on Fragile X syndrome, which requires long reads (and thus their interest in who long the current PGM reads are, as they use 454 sequencing for their research on tri-nucleotide repeats). He told me that Oxford Nanopore was offering a ‘personal demo’, and while not clear on what was going to be presented, he was going to go back and take them up on their offer.

Fast forward to the Ion Lounge event, and I have the good fortune to run into the same customer I met on the bus. (It is not a given that anyone I invite to an event will come, nor is it a given that I will be able to visit with them as there was about 350 people at this networking event.) He tells me that in his opinion Oxford is doing exactly what Pacific Biosciences did during their introduction – promising quite a lot, and then delivering much less than that.

In particular, he was able to get a ‘personal demo’ due to his research interest, and that it basically comprised of a detailed description of how the technology worked (which he already knew) and a walkthrough of their software for analysis. The disappointment over not seeing sequencing data was palpable in my conversation with him, and we discussed some of the challenges of being able to determine sequence from individual DNA molecules. (You can see some of my prior opinion on just measuring single molecule signals here.)

One of my prior colleagues who is now at Oxford told me that they are delaying their commercial launch as they want to raise their accuracy to the bar of other NGS, namely to 99%. (In a Bio-IT World interview right before the AGBT meeting in Marco Island in February, they said they could get on the order of 97% accuracy.) So there’s a plausible ‘official’ rationale for the product introduction delay. Yet after all the activity around the booth, very little ‘news’ from there, other than the publicity of the ‘hands-on’ nature of seeing development prototypes. (I overheard that the existing minION unit would be commercially launched at about one half the length.) Other than the accuracy goal, there were no throughput or read number specifications (or even ball-park estimates) of the minION and gridION units, so no news on that front. Come to think of it, no one spoke to me about pricing either.

One other item of note, among the many conversations I’ve had the privilege to participate in this week – several groups have indicated they’ve submitted early-access collaboration samples to them (being qualified as having genuine research problems to solve, like the Fragile X example above), but no data has been returned yet. I would imagine that once that data is returned I would hear about it, although with early products from a company getting off the ground, these kinds of projects are protected by a non-disclosure agreement (NDA). So people saying they ‘don’t have any data’ have plausible reason to deny they don’t have any data, because they are forbidden by their NDA not to talk at all about it.

In other single-molecule news, BioNano Genome had a launch workshop of their Irys system (I wrote about them here) but according to my sources what they have launched is an early-access program, not a commercial product yet. Launch is set for the spring of 2013, assuming all the technical difficulties that arise in field testing get solved. It’s an interesting technology as a complement to NGS, however it only looks at part of the overall genomic organization question (mapping genome copy number).

Lastly, many thanks to the several people who went out of their way to make kind comments about this blog. It has given me a needed boost to continue writing about what is going on. More to come next week about other observations from ASHG.

6 thoughts on “Oxford Nanopore and commercialization at ASHG 2012”