“We are lucky to live in this era, before and after NGS; once technology hits (the clinical lab), it is here to stay.” (Panelist at QIAGEN reception, November 4 2015) 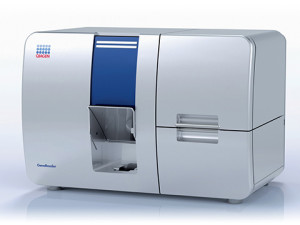 A week and a half ago, it was the International Congress of Genomics 10 in Shenzhen, China and the BGISEQ-500; this week it is the Association for Molecular Pathology in Austin, Texas and the QIAGEN GeneReader. While in Shenzhen, I heard a brief session from QIAGEN who said that the GeneReader was going to launch by the end of this year, and while I relayed this information out (via Twitter over VPN from my iPhone but that’s another story).

A few days later the financial results were released, and the GenomeWeb piece that reported it (headlined ‘Qiagen Q3 Revenues Fall 7 Percent on Currency Effects, Firm Misses Estimates’) ended with the assurance from the CEO that “we’re still confident that we’ll be launching this year” when asked about the GeneReader launch timeline. Since there wasn’t any rumor about their new system launching at the October ASHG conference in Baltimore, I had thought that it wasn’t going to happen this year since the Human Genetics meeting is a large one with many of their customers attending.

The first day of the Association of Molecular Pathology is devoted to corporate workshops, which means from 8am through 5pm (including the lunch hour) there are some 10 different workshops to choose from, with another set of 10 the following hour (technically 50 minutes allowing 10 minutes to get from room to room). Here’s a schedule if you are interested (PDF). SeraCare had ours at 8am and was well-received (I’ll write about AMP over at Genomic Precision next week) but people looking at the final program saw this title for a 3pm workshop: “Clinical Insights Delivered Through Medical Data-guided Panel Designs, Enabled by Seamless Workflow of the GeneReader NGS System: A Study of Colorectal Cancer FFPE Clinical Samples”. And in the paragraph description, this text: “The QIAGEN GeneReader NGS System is the industry’s first fully connected workflow, engineered specifically for clinical use. This turnkey system is purpose-built, affordable to purchase and run, and focused on the content, assay and analytics that matter most for laboratories and their customers.” 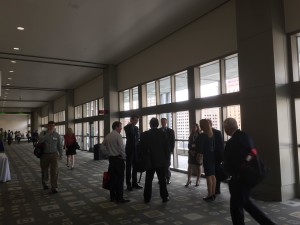 While headed over to the room (you can imagine for ten minutes all the people you can see walking back and forth from room to room, stopping for greetings and conversations), I noticed Peer Schatz, CEO of QIAGEN speaking with a group (who were likely investors). It was then that I knew the rumors that a new system was going to be announced were true.

Their first presenter, Dr. Yassmine Akkari, Scientific Director of the Cytogenetics Services and Molecular Pathology at Legacy Health in Portland OR discussed the priorities to develop the content for a cancer gene panel for NGS of most usefulness for the molecular pathologist. She described the following criteria: high cancer prevalence (the top 5 cancers by occurrence), health impact, the availability of therapies for intervention, established gene markers, and guidelines from NCCN, ACMG, ESMO, ASCO, CAP and AMP. On top of this is available clinical trials, existing drug label information, and of course the scientific literature (interesting that Ingenuity isn’t mentioned in this context). QIAGEN developed a knowledge base that ties all this and more together, which they have illustrated in this chart. 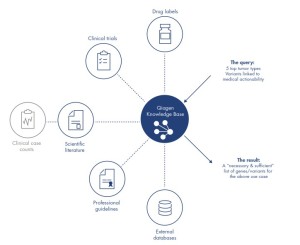 What is interesting about this panel, called the ‘Actionable Insights Tumor Panel’ is the concept of ‘necessary and sufficient’ mutation targets, and of course the type of cancers this panel is designed for does not come as a surprise: lung, colorectal, breast, ovarian and melanoma. These are what are known as solid tumors (as opposed to heme- or blood-based ones), and are the most prevalent forms of cancer in terms of incidence.

Dr. Scott Steelman is part of the leadership team of the Broad Technology Labs, and this team includes the likes of Chad Nusbaum, Andreas Gnirke and Sarah Young. (This is definitely a ‘heavy-hitter’ group, for example Andreas has been on many high-profile methylation and gene expression papers from the Broad, this one on RRBS for example.) He presented several aspects of the system: first, the ability to load 4 to 40 samples either as a batch or sequentially when samples are ready. This is reminiscent of the original design of the Intelligent BioSystem’s NGS system, which looking back at an old post (here) was announced way back in March of 2012. He did not say it explicitly, but this system has four flow-cells and can run up to 10 samples per cell. (In the Q&A he clarified that as few as 4 samples could be run on one cell.)

Secondly there is a special FFPE repair reagent that increases accuracy in the sample preparation step by reducing the amount of cytosine deamination that results in false-positive results, as a cytosine thus affected is read as a thymidine base (and that sequence call quality is high, since the chemical modification occurs before the sequencing library is made). If you are interested in further work on this topic, here’s one paper about cytosine deamination in FFPE, and here’s one approach to addressing the problem. 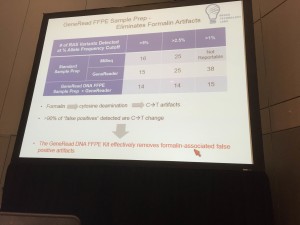 Slide showing improvement of the false-positive rate from FFPE

Here’s a photo of a slide showing the effectiveness of this reagent, and comparable MiSeq data with TruSeq enrichment. During the Q&A, a person asked if the reagent was used with the TruSeq/MiSeq combination, and the answer was ‘no, it is designed to work all together’ and not as components. At >2.5 VAR, 25 called variants were reduced to 14 with the reagent (and software analysis).

Third there is a middleware web-accessible software called GeneLink that can schedule, print out ‘work instructions’, reports, and provide an API for LIMS integration.

A few things were not said, which should be noted – the GeneReader is highly automated, using the QIAcube for library preparation and also template preparation. Also no mention was made of readlengths, nor overall throughput. Yet for the molecular diagnostic market, does it really matter? Dr. Tadd Lazarus, at the evening reception mentioned that in the early days of computers there was an intense focus on specifications. We can remember the days when clock speed and chip design made a big difference in overall performance and usage. But today, all that really matters is the software that it runs, the applications that it can access, and we are in such a time for high throughput sequencing.

And frankly, 40 samples to run a 330-amplicon panel with a 16.7kb footprint (details of the Actionable Insights Tumor Panel) isn’t a huge throughput, if you prefer to look at the world that way.

The workshop finished at 4pm, and I had another workshop to attend and was finished around 5pm. The QIAGEN reception started at 6:30pm, and within that short time I had the opportunity to get some feedback. And I had the privilege of meeting a QIAGEN Director of NGS Molecular Diagnostics, Kumar, who asked me what that feedback was: first, a question of throughput speed. (I acknowledge this feedback was from a friend who still is at Thermo Fisher Scientific.) Kumar replied that overall speed is sample to answer, not sample to VCF file. (Full disclosure – he didn’t use the exact term ‘VCF File’…) Without the need for a high level of bioinformatic (and interpretative) expertise, the overall time actually is on-par with what time ‘real world results’ take to generate.

The second concern was one of price. The pricing of the system was not mentioned, but Kumar told me that there are three pricing models, including a ‘sample to report’ one, where customers would pay on a per-sample basis.

Dr. Steelman mentioned that at the Broad they are used to tinkering around and needing to optimize a lot of rough edges of the technology they see, but the GeneReader was a very easy-to-use system. And in the world of molecular diagnostics, where the existing systems on the market still requires a fair amount of technical wet-lab and bioinformatic expertise (Ion Torrent’s and Illumina’s efforts to make it easier notwithstanding), the GeneReader is a welcome addition.

For more information about the system, QIAGEN put up a nice webpage here, with four pieces of product literature already available.