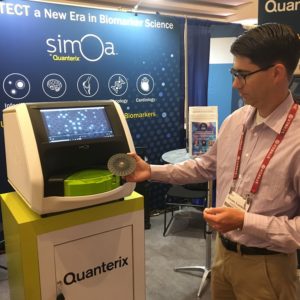 Jeremy Lambert from Quanterix, the SR-Plex and the Simoa disc at the Next Generation Dx Conference

The 1990’s were an exciting times in science. The Human Genome Project had published their first five-year plan (and thought then the human genome had 100,000 genes instead of 20,000). Scientific publications were coming out from a fledgling company called Affymetrix that combined photomicrolithography with peptide and nucleotide synthesis. This paper published in Nature in 1993 electrified scientists with a potential technology that could scale their manual work in ways only imagined at that time.

Personal Computers and the CD-ROM

The PC revolution was rapidly iterating, with Windows 3.1 released in 1992. With sales of 2 million in the first month of release the first ‘real Windows’ was a driver for adoption of a GUI. For those readers here too young to remember, individual laboratories (and businesses and households for that matter) grappled with moving up in hardware quickly, buying Gateways and Northgates and Tandons for $3K or $4K to get a 50 MHz ‘486DX and 4MB of RAM. Understand that at that time, everyone was using MS-DOS and was very familiar with typing “cd\” and “mkdir” commands, everyone knew you could only use 8 characters for a filename, and utilities like Norton Commander made life a lot easier.

In the laboratory a standard computer had a CD-ROM drive, which meant a huge amount of pre-recorded data could be easily obtained. (Capacity of a CD-ROM is about 550 MB.) GenBank was a subscription model then, where every quarter a set of CDs would be shipped to laboratories, and as its size doubled every 18 months access could be done by anonymous FTP, or even email.

Way back then in 1995 (let’s see, that was when the Theranos founder was 11 years old) a finger-stick publication came out that proposed to process 90 uL of whole blood from a fingerstick on a CD-format, centrifugal-force powered ‘lab on a CD’. The CD format, ubiquitous as AOL sent out first 3.5” floppies and then CD-ROMs to households in the US (interestingly an estimate of $300M was spent on this marketing effort), was imagined to cheaply produce spinning disks with dried reagents in them in order to realize a dream of inexpensive diagnostics.

A new immuno-assay instrument from Quanterix

Fast-forward to the Cambridge Healthtech Institute’s Next Generation Diagnostics conference in Washington D.C. where a Lexington MA-based company called Quanterix launches a benchtop system for highly-sensitive immunoassays, but also can be used to measure other types of molecules such as microRNA.

Quanterix Simoa technology is bead-based, and at 2.7 um is about the same size as the beads Illumina used waaaay back in 2003 with the first Sentrix™ BeadArray microarrays for genotyping. (For those unaware, I was a product manager at Illumina from 2003 – 2005 in San Diego then relocated to Maryland to sell for Illumina, where I still reside 12 years later.) And not unsurprisingly, this technology comes out of the laboratory of Dr. David Walt, who for over 30 years was at Tufts University in Boston but recently relocated to the Wyss Institute for Biologically Inspired Engineering at Harvard University.

With such small beads, the same advantages apply of fast kinetics and easy scalabilty. (Similarly-sized beads are used as an underpinning for Luminex technology.) These beads are paramagnetic and also have different fluorescent dyes for multiplexing. Luminex beads are also fluorescent with a pair of dyes in multiple concentration and thus many combination. Beads from both Quantimetrix and Luminex are in solution; Illumina beads are unlabeled in comparison and sit in microfabricated wells.

Derivatized to bind protein, the number of beads vastly outnumber the number of analyte molecules you want to measure, and are added to your sample in a 96-well format. The beads are mixed on a shaker, washed on an automated magnetic separator, and resuspended on the shaker. Additional reagents are added and the process (shaking to resuspend beads, and then time on the separator unit) repeated a few times.

The reagents added during this cycle is where the assay occurs. The beads have captured the protein of interest, and a specific biotinylated antibody recognizing the protein epitope binds to your protein. Another reagent, streptavidin-β-galactosidase (SβG conjugate) is added to complete the immunocomplex.

The plate is then loaded into the SR-Plex unit along with a stack of Simoa disks, rack of pipette tips and bottle of fluorogenic substrate RGP (Resorufin β-D-Galactopyranoside)(Apparently Quanterix doesn’t have a separate name for the assay platform or the disk.) Anyway the disk has twenty-four holes around the inner ring, with microchannels and vacuum ports on the outer edge. The automated unit will then use internal pipetting arm to resuspend the sample bead pellets with RBP solution and transfer the beads to the Simoa disk chamber where the beads (on the order of 250,000) will sit in a well within a disc microchamber. Each well is designed to hold ~40 femtoliters, 4.25 um wide and 3.25 um deep.

The aqueous phase that sits in the microchamber (with a single bead decorated with protein and specific antibody recognizing an epitope, and the biotin moiety bound to the streptavidin-β-galactosidase conjugate) is surrounded by the RBP fluorogenic substrate. Oil is overlaid the set of microchambers (sealing the top and removing any beads not in wells), and the enzyme reaction takes place generating a localized fluorescent signal within each microwell.

The platform is sensitive enough to detect a single molecule of target protein, which is what drives the sensitivity in that you can think of it as ‘digital PCR for protein detection’. Poisson Distribution statistics indicate that if you have 1 femtomole of protein in 0.1 mL (in other words 60,000 molecules) mixed with 500,000 beads and captured and labeled for detection, 12% of the beads will have a single protein molecule and 88% will have none.

Sensitivity is what Simoa technology is all about

The range of protein concentrations that the platform can detect is from 500 pg/mL down to 0.23 pg / mL. For comparison a conventional ELISA immunoassay is 5,000 pg / mL down to 27 pg / mL. Quanterix up until this point had a larger system that automated the shaking and magnetic separation steps, which added to the cost and size of their first Simoa HD-1 Analyzer which is a multiple of the cost and size of the SR-Plex.

To-date the target segment that can afford the instrumentation and need the increased sensitivity has been biopharmaceutical companies. However with the benchtop SR-Plex we could witness a democratization of exquisitely sensitive immunoassays.

Some limitations of the technology

One technical capability is for multiplexing; the system can multiplex to six analytes simultaneously. One can argue that due to antibody specificity and issues around cross-reactivity, a six-plex immunoassay is about as high as one would want to go. Of course Luminex can multiplex to much higher levels, so that may be a limitation; however at a lower sensitivity. (I understand that Luminex is about 100-fold less-sensitive than the Simoa system.)