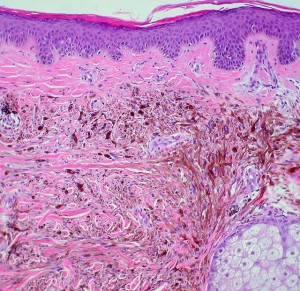 Biopsy of skin sample courtesy of euthman via Flickr

FFPE (Formalin-fixed paraffin embedded) tissues are standard preparations in the clinical world. It has been estimated that there are millions of FFPE samples stored in countless hospital laboratories and research pathology groups, all part of a standard operating procedure among pathologists and other hospital personnel. These tissue samples are embedded in paraffin blocks for indefinite room-temperature storage and are easily handled, and standard staining and microscopy techniques can then be employed to determine cancer stage, for example.

The problem with FFPE is that in the process of formalin fixation and embedding, as there are several variables that will determine the amount of RNA and DNA degradation that occurs. This including fixation time, the use of buffered vs. non-buffered formalin, the amount of oxidation of the formalin, and the age of the blocks that all play a role. Of course after fixationg and embedding treatment there is not much you can do to rescue that sample; the results only provide information about what works or does not work optimally. For many researchers they get what they get from the pathologist they are working with.

In the world of NGS there is great interest in determining a low minor allele-frequency mutation in a cancer sample, thus the interest in AmpliSeq™ for multiplexing up to 3,000 amplicons from as little as 10ng of FFPE input DNA. But given the error rate of NGS in general, there is a minimum mutation frequency of 5% (I know one AmpliSeq / Ion Torrent PGM™ customer who conservatively uses an 8% minimum allele frequency threshold). Cancer is the focus for mutations, as a minor population of cells in a given tissue will have somatic mutations that cause tumorigenesis. (A challenge is to determine which somatic mutations are ‘driver’ mutations versus the ‘passenger’ ones.)

And due to the damage that DNA receives in the FFPE process, the AmpliSeq amplicon design is limited to 150 bases, as longer amplicons will increase the drop-out rate (where a given target is broken up, resulting in non-amplification of that target). For RNA, often TaqMan™ is used for its low target ‘footprint’, where the primers outside the dual-labelled TaqMan probe are on the order of 50 to 150bp; RNA as you know is much less stable than DNA, and due to this labile nature of RNA the level of degradation due to endogenous endonucleases can be significant.

In the context of a hospital’s existing biopsy workflow, biopsy samples are taken by the physician and prepared by the pathology laboratory technician. After embedding the samples can be genotyped by one of a number of methods, but the DNA is from the entire microtome-sliced sample. In some relatively rare research cases will laser-capture microscopy be used to separate different cell types from a given tissue.

The methods of genotyping are manifold. Illumina and the Infinium™ whole-genome genotyping assay was once limited to performing genotyping on FFPE, a few years ago developed an FFPE sample restoration solution, with a method of determining quality of the sample before hundreds of dollars in time and reagents are spent on that sample. Sequenom’s MassARRAY® system with its single-base extension assay will perform nicely on FFPE samples, and of course NGS has a number of competing offerings for small amplicons from small amounts of sample, with AmpliSeq having the lowest input requirement.

Moving on to RNA analysis, one current test for breast cancer, the Oncotype Dx™ from Genomic Health. Their technology looks at a panel of 17 genes, and their technology automates RNA isolation from FFPE samples. It is one of only a few approved tests in the US that use expression profiling.

As an aside, a few years ago I had dinner with a cancer researcher who did a study on breast cancer RNA-Seq, looking at a particular type of cell from FFPE samples. He told me that to isolate 50ng of intact RNA, it took some 2 months and 70+ microdissections to get enough material for the experiment that was published, but he felt that the insights gained to look at a single tissue type separated from the milieu of types of cells in a particular tissue was worth the effort and insight gained.

Wouldn’t it be much better to take a look at RNA levels in tissues in situ?

This is where Advanced Cell Diagnostics comes in. Based upon a proprietary method of signal amplification, their procedure permeabilizes the cell membrane from FFPE samples, binds a probe along a 1kb length of the RNA in situ, each pair of probes then bind to a second probe, which is then decorated with a third probe (multiplying the positions for signal detection some 20-fold) and then with the detector (another 20-fold increase). They claim to be able to detect 1kb long stretches of RNA transcripts, which is plausible even if the RNA is degraded, due to the localization of the single RNA molecule. Even though it might be broken in several places, the probes can find their specific target, and having a two-probe requirement for the second probe the first probes could be on separate molecules that were once contiguous, but are close enough in the cell to be recognized.

Way back last March, I was at the annual Association for Biomolecular Resource Facilities meeting in Orlando FL. I reported then hearing George Church give a plenary talk, where FISSEQ was mentioned, which was in-situ sequencing currently around 32bp in length. What ACDbio is doing is different, looking at individual RNA molecules in the cytosol on a slide rather than sequencing single mutations in the nuclei, but the overall idea is intriguing, and full of promise.

While catching up last week with a friend who has worked with many different life science companies, I heard the disheartening news that this person was currently looking for a new position, after about 18 months working for a startup company. And a prominent ex-Life Technologies person the same week joins a different startup company, Advanced Cell Diagnostics (the press release can be found here), and so it goes. One person is let go, and another person joins in.

Two weeks ago at PAG XXI I asked a colleague about another long-timer from Applied Biosystems who recently left Life Technologies, and was told that this person went to a startup in Hayward California. The name? Advanced Cell Diagnostics. It’s a small world out there – this is a technology to keep on your radar.