While at the recent Next Generation Diagnostics Summit (organized by the Cambridge Healthtech Institute and held in Washington DC August 15-18 2017), you get exposed to many specific topics within diagnostics. And while having multiple tracks is a daunting task if you prefer to hop around different rooms (and at the venue was across three floors), there is a ton of interesting, specific information that you may not easily find anywhere else.

Seven different ‘streams’ of topics had three sections apiece across the four days, meant one topic such as “NGS” had the first day-and-a-half devoted to ‘Clinical NGS Assays: Technologies and Validation’, the second day-and-a-half to ‘Clinical NGS Assays: Applications and Interpretation’, and the last symposium day to ‘Digital PCR’ or ‘NGS for DNA Forensics’. Other topics included circulating biomarkers, immuno-oncology, point-of-care, infection, commercial, and companion.

It is easier to illustrate with a screen-capture of the brochure. However what it meant was to decipher a 63 page PDF (you can access it here at CHI’s website) to determine which speaker in which stream to catch across the 21 sections was a challenging task. 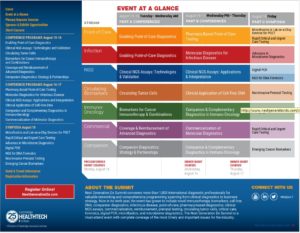 The last day while getting a quick lunch (something I don’t typically do as during conferences but the exhibit hall had closed-up for that last smaller symposium day), a Five Guys outlet was only a block away from the venue. (For those not familiar, this chain has beaten a California favorite In-And-Out recently and while in Paris a few months ago I noticed they even have a presence on the Champs de Elysées. I happened to sit down next to a speaker for the digital PCR session (that day I was in the ‘Emerging Cancer Biomarkers’ session), who happened to be speaking later in the afternoon, named Travis Schlappi from California Institute of Technology (Caltech).

Dr. Schlappi started by describing the threat of antimicrobial resistance (AMR), and its prevalence in causing an estimated 10 million deaths worldwide by 2050. (The estimate for cancer is 8.2 million in 2016 by comparison.) The methods developed to-date for testing AMR are manifold, to address the problem of the slow method of traditional culture. However, the challenge is to get a point-of-care device that can get a phenotypic susceptibility result within 30 or 60 minutes.

Why such a short timeframe? One main driver is the availability of the patient being tested; they can wait an hour for a test result to come back, but if it takes either transport to a central laboratory or many hours at the point-of-care, that patient has to come back for treatment.

For antibiotic susceptibility, a curated database indicates resistance information for 13,293 genes, 257 antibiotics, and across 3369 species.  Thus the challenge is a large one, and for proof-of-concept work Dr. Schlappi looked at the ribosomal 23S gene as a proxy for growth for the target organism. Later they could simply target a specific resistance marker of choice.

Naturally real-time quantitative PCR isn’t precise enough to measure small differences in DNA concentration (qRT-PCR, while in wide use, has known limitations) and thus digital PCR is pursued; he then described work characterizing bacterial urinary tract infections (UTIs) after a 15-minute exposure to antibiotics, and comparing qPCR to digital PCR. This work (published in 2016) laid the theoretical groundwork: qRT-PCR could detect a 2-fold ratio of the 23S gene’s copy number, while their work demonstrated dPCR could detect a 1.2-fold ratio after a 15-minute antibiotic incubation. A ratio of 1.4-fold is the discrimination ‘line’ (see figures 3 and 4 in this publication for the details) for determining antibiotic resistance or susceptibility.

Now that they have a method for a fast 15-minute exposure to a panel of antibiotics, and the ability to discriminate between resistant and susceptible samples via digital PCR, the remaining challenge is to speed it up.

This is where LAMP (loop-mediated isothermal amplification of DNA) comes in, as well as something that the Ismagilov has developed called the SlipChip.

LAMP is a novel method of DNA amplification that is isothermal and fast, first published in 2000 by a Japanese group. Its advantages are simplicity, resistance to contaminants, and low cost, as it uses a different polymerase (Bst instead of the commonly-used Taq polymerase and its variants). It is useful primarily as a diagnostic detection technique as primer design and target size constraints (it uses 2 or 3 primer pairs to target 6 or 8 specific DNA targets). By coupling an intercalating dye (such as SYBR Green), or other magnesium dependent readouts (pyrophosphatase precipitates) simple detection systems (including even by the unaided eye) can be devised.

The SlipChip is an interesting technology first described in 2009. A horizontal channel pulls the sample in one direction by capillary action. The chip is pushed in a perpendicular fashion compartmentalizing the sample with the LAMP reagents. Dr. Schlappi showed a great YouTube video of one of the lab’s scientists boys taking a capillary-draw sample and applying it to the SlipChip, and then in a second YouTube video showed how easy it was to push it cross-wise forming some 2,500 individual compartments. It was great seeing two young boys (6 and 7 years old) doing the demonstration.

It is clear after a 15-minute antibiotic incubation, combining simple digital partitioning, and fast isothermal amplification and detection where this is leading to. 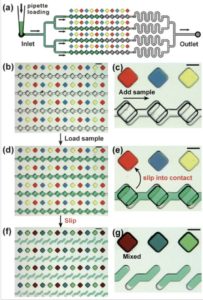 This is technically a research project tacking an important point-of-care problem using digital PCR. What are the commercial paths for this technology?

LAMP only requires a 60-65C heat source, and the aforementioned LAMP chemistries may enable a visual read-out that a cellphone can snap a photo of (and analysis software could analyze the image). If all that is required is a hot-plate (for example this one from Thermo Fisher Scientific is about $300) and a smartphone with a camera and software app, we may be closer than you think to widespread point-of-care application of digital PCR technology.

This technology certainly appears promising; using microlithography in this way for compartmentalization is ingenious as no complicated pumps are needed (say for RainDance droplet compartmentalization). Using a simple hotplate for fast isothermal amplification, and combining it with a visual readout on a smartphone camera means the technology can be widely adopted.

This is a technology (and others like it) are percolating in academic laboratories, and have real potential for impacting point-of-care diagnostics.