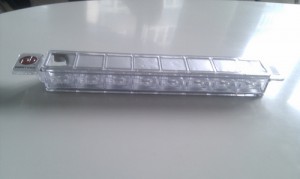 We’re living through a time this year of market transition. The Illumina HiSeq continues to have a strong market position (although the upcoming Ion Torrent Proton sets out to change that, however it won’t be available until this September / October). For the time being, customers with NGS platforms are considering upgrading (from the HiSeq 2000 to a ‘fast-mode’ 2500, or from a 5500 to a 5500 ‘Wildfire’ that will be launched later this year, decreasing the cost-per-base substantially and eliminating ePCR).

Yet Pacific Biosciences continues to publish interesting papers, and at the recent AGBT conference there were many posters with novel applications of the technology. The majority were de novo assembly of genomes and transcriptomes (which make sense given the long-read distribution of the platform). For those who are not that familiar with Pacific Biosciences (or PacBio for short), they had made a big splash in 2008 at the same AGBT conference in Marco Island, with the promise of a 15 minute whole-genome by single-molecule sequencing. While not the first company to commercialize an approach to sequencing by single DNA molecules (Helicos Biosciences was the first, here’s a nice Wikipedia article on it), it was the first to offer ‘real-time’ sequencing while Helicos did a single base at a time and imaging. (Much like the difference between taking a video of a process while it is ongoing, vs. taking a picture at a time in a ‘stop-motion’ procedure.)

After PacBio’s initial splash in 2008 (which was a barn-burner of a talk by Stephen Turner), fast-foward 4 years: a public IPO that nets some $200M, a commercial system selling a system for $695K (a behemoth at 1900 lbs, 6.5ft long, and requiring a ‘heavy duty floor’), and many friends and acquaintances from my prior employer Illumina (and ex-competitor Affymetrix) joining their commercial team. And then unmet expectations, downsizing (a quarter of their workforce, about 130), a new CEO at the beginning of 2012, their CSO takes a blended position across the country at Mt. Sinai in NYC, and the commercial team is reorganized (with an ex-colleague of mine at Life Technologies, and a senior marketing person leaves in simultaneous news). Lawsuits are currently underway by disgruntled shareholders (at last count four of them). So there’s no lack of drama in the middle of this transition.

The task ahead for PacBio is to finish the repositioning of the company as an excellent niche research tool for emerging applications (for example, characterization of 5meC in real-time for epigenetics – here’s a publication from late 2011 that is an interesting read). At last year’s ASHG / ICHG meeting in Montreal, I caught a PacBio workshop that had some 7-9 different kind of modified bases that the real-time kinetics of the PacBio RS system could detect. Quite a technical feat, and really something to keep an eye on as scientists continue to discover the presence of modified bases in the genome, and their utility in gene expression. Joe Ecker of the Salk Institute calls 5me-Cytosine ‘the fifth base’, and in 2009 hydroxy-meC was discovered in human neurons. (Modified bases have been known to exist in bacteria for some time now, however scientists haven’t looked at their presence in mammalian systems until only recently.)

Will there be a place for PacBio in the future? Could the technology scale as original envisioned? Stay tuned – if not this technology, there are others on the horizon that may.