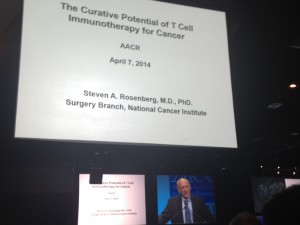 As a person who worked at a melanoma research institute once upon a time (the John Wayne Cancer Institute in Santa Monica California, by the way), it was a pleasure to hear Steven Rosenberg’s plenary talk at the AACR meeting in San Diego. A lot has happened since 1997.

It was in the mid-1990’s that I was working in the laboratory of Dr. David Hoon, and the Institute was one of the few groups at that time that had several groups working on tumor immunology. One of our main ‘competitors’ in the tumor immunology field (for metastatic melanoma) was Steven Rosenberg of the National Cancer Institute, which had the history of being the longest NCI Research Program Project grantees at that time (JWCI had the second-longest one).

Dr. Rosenberg is the Chief of Surgery at the NCI, and has been working on cell transfer immunotherapy for many years. His work is built on the insight from his work (going back to the mid-1980’s) on the function of IL-2 to expand an individual’s specific T-cell population for cell-mediated lysis of cancer cells. This approach has the potential for curing metastatic solid cancers such as colon, prostate, breast and others that resulted in over 560,000 deaths in the US in 2010.

Successful cancer drugs (Herceptin cost patients $6B and Avastin $7.6B in 2010) prolong life of metastatic cancer patients when combined with chemotherapy, without a doubt. Yet the effectiveness of these treatment is measured in months, not in terms of being cured. (At this meeting I’ve seen way too many Kaplan-Meier curves, something physicians are very familiar with.) T-cell immunotherapy has the potential for using the exquisite specificity of the body’s own immune system to eliminate cancer.

Tumor infiltrating lymphocytes (TIL) are taken from an individual’s metastatic lesion, activated with IL-2 and expanded ex-vivo (it is this process that is currently manual and labor-intensive), and after analysis and some additional processing re-introduced back into that same patient. When IL-2 is administered to patients directly, there was a relatively low rate of cancer regression – on the order of 5-10% for melanoma. Using T-cell immunotherapy, that number rises to 22% (he reported on 93 individuals, with 20 of them ‘complete responders’ with an average follow-up time of 8.8 years).

He showed a photograph of one complete responder who needed a second T-cell immunotherapy treatment, and the individual’s melanoma on the area beneath his ear was hard to look at. (It was about the size of a grapefruit.) But this individual is after 8 years showing no sign of recurrence, with the ‘after’ photograph a remarkable contrast to the first and intermediate ones.

He then went on to the mechanism of melanoma immunogenicity, using whole-exome sequencing of these individuals’ tumor for their SNV’s that may code for specific peptide antigens processed by our immune systems and presented by the MHC complex. From the exome sequence, they look for non-synonymous variants that change amino acid sequence (in comparison with their germline exome sequence), then computationally determine the 9-mer or 10-mer peptides that could be the specific individual’s antigens that the TIL’s are recognizing. By cloning and expressing these longer proteins (with the individual SNVs expressed as concatenated peptides), these are then processed by the patient’s TIL’s and then assayed for the ability to kill their own tumor cells in-vitro.

Think about that – taking an individual’s tumor and tumor infiltrating leukocytes, and that individual’s tumor exome sequence for all the coding genes in their cancer genome, and determining the exact 9-mer peptide that that individual’s own T-cells are using against the cancer that threatens life. In this specific example the gene identified was ERBB2IP, which Dr. Rosenberg coined the term “the ultimate ‘personalized therapy'”.

(I feel compelled to note here that next-generation sequencing is for research use only, and not for diagnostic procedures.)

He then went on to show data that of the population of TIL’s from a primary tumor from an individual, the majority of the cells (26.9%) were the specific T-cells against that specific tumor antigen.

We have come such a far way in tumor immunotherapy; it was satisfying from professional, scientific as well as personal levels.

For more information, here is a 2012 Perspectives piece by Steven published recently in Science Translational Medicine, and if you are interested in a more comprehensive review, here is a recent review by Hinrichs and Rosenberg in Immunological Reviews.