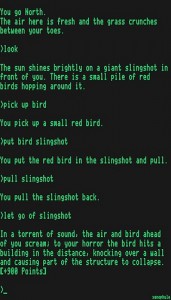 In the 10 years (or so) since I last did tactical marketing for QIAGEN, the world has changed a lot, and in many ways the world hasn’t changed all that much.There was a trade show in San Diego I was a ‘booth champion’ for, called the Protein Society, that I did a pre-show postcard mailer, had a raffle in the booth (for the life of me I can’t remember what the prize was, alas), did a pre-show email, and did a lot of standing over the course of three days in a hotel talking with a lot of customers.

Recently I was a booth champion for the recent ABRF meeting in Orlando (ABRF is a conference for molecular core facilities, whether for proteomics, genomics, or even metabolomics). And I did a pre-show postcard mailer, gave away a number of cool Ion Torrent insulated tote-bags, did a pre-show email, and did a lot of standing over the course of four days in a hotel talking with a lot of customers.

But this time there was the Ion Torrent Proton, last time there was just Ni-NTA pre-packed columns. This time there is Twitter, Facebook, and YouTube that customers find out more information about company products, alternatives (otherwise known as competitors), not to mention interactive forums (SeqAnswers for next-generation sequencing, but way back then the Biotech Rumor Mill was the only interactive forum – not for customers, but for industry representatives to chat among themselves).

And then there’s the blogs. Lots of blogs, many more so now even though writing a blog was an option 10 years ago. And in the life sciences, there are several individuals that can have a large impact due to the 90-9-1 rule.

And personally, this is part of the motivation for me to become part of the ‘creator of content’ rather than just a consumer and occasional commenter. Having had a personal website and domain for over 10 years (hmm those pictures sure do look old) concerns about privacy ruled the day. Now in 2012 with the advent of such powerful social media tools, the calculus is whether or not one wants to define themselves or not online. And for this person who is part of the “1%”, I’ve chosen to do the former.

Social media will not go away. When Twitter hit the scene in 2008 I simply ignored it, like most people. YouTube I didn’t consider social media, and LinkedIn was just a work networking tool. Facebook wasn’t for me, I don’t have any friends. (Just kidding, really!) And now any marketing professional and any company wanting to do excellent marketing has to be active in social media. It isn’t an option – the world has changed – and any company without a Facebook page, a Twitter feed, a YouTube channel, and a LinkedIn presence won’t have nearly the reach of companies that do, and you can bet your competition is already there.

And what will happen if and when the big four that I just mentioned (Facebook, Twitter, YouTube and LinkedIn) change, become less popular (MySpace anyone?) or become superceded by other functionality? (Think of the growth of Pinterest, or Instagram.) Your likes, followers, subscribers, and connections will travel with you over there, whereever ‘there’ might be in the future.

But for now customers are customers, whether they be Principal Investigators, Laboratory Managers, Post-Docs, Technicians, or Volunteers, and you need to be where they are. Will you be part of the 1%?