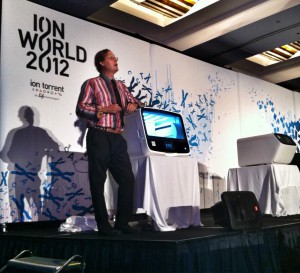 A Life Technologies-sponsored 2-day conference called Ion World 2012 kicked off yesterday afternoon, with Jonathan Rothberg founder of Ion Torrent, Tim Triche of the Childrens Hospital of Los Angeles, Joe Boland of the Division of Cancer Epidemiology and Genetics at the National Cancer Institute, Shawn Levy of Hudson-Alpha Biotechnology Institute, and Craig Venter from Synthetic Genomics and the J. Craig Venter Institute all speaking.

Life Technologies is a pretty remarkable organization, in that they have historically organized large ‘user-group’ meetings as separate-entity conferences that stand by themselves. The first time I was personally involved with one was almost two years ago, called ‘Sequencing at the Tipping Point’, held at a hotel in San Diego California. (Here are Mark Stevenson’s notes about this meeting to give you a flavor of what it was about.) Even back then the $1000 genome was a stated goal, and the most memorable item from that meeting was Craig Venter’s talk on his work on synthetic biology and the potential for using algae to produce biofuel feedstock for our existing petroleum infrastructure. It was inspiring and memorable.

This year there are over 400 attendees, and some remarkable announcements were made. First, a single instrument that does template preparation, bead enrichment, and chip-loading (handling two chips at a time) called the Ion Chef (no I don’t have any responsibility for the name, and yes there was a popular cooking show by the same name but that was in the late 1990’s, and yes I was a fan of the original and nothing else could capture the excitement of that show). Expected availability is mid-2013, the expected price to be about twice that of the Ion OneTouch 2 (the OneTouch instrument for template preparation for the Ion Proton instrument and PI and PII chips), and it will help eliminate one major source of variability in the PGM system, which is chip loading. (Note: I originally indicated that the Ion Chef did library preparation, but a colleague pointed out that it takes the process from already-prepared libraries. Sorry for any confusion! We already did automate library preparation with the AB Library Builder which works for PGM libraries, so that is an option.)

For those not familiar with the PGM process, after the OneTouch ePCR the Ion Sphere Particles in emulsion need to be enriched with a second instrument (the OneTouch ES) which does magnetic bead separation, and then these enriched beads are washed and then pipetted into the chip, and then spun briefly in a mini-centrifuge to seat the beads in the wells. Multiple loadings, particular handling, and other tips were often shared to help increase the loading density, and these loading density ‘heat-maps’ are part of the standard run-summary report, where red = higher density and blue = lower density. Of course after a run, it gives you only the idea of how efficient the loading is, and there is nothing that can be done to improve it because your sequencing has already finished.

Of course with a higher price, the Ion Chef isn’t for everyone, but for the high-throughput user who will be running their Proton enough to justify the automation in terms of saving hands-on time, and for the clinical researcher who needs to have standard procedures for their operation and prefer automation.

The second announcement was around a technology called Avalanche. Applicable across the Ion Torrent product offering (which is to say, both the Ion Torrent PGM and Proton), this does away with emulsion PCR, a 30-minute process, there were tantalizingly few details shared, with the promise of more to be shared at the upcoming ASHG meeting, also in San Franciso in two months. I suspect (and I have no ‘inside information’ here, just surmising) that a 5500 Wildfire approach could be made on a derivatized chip surface, although they would have to figure out how to land a single molecule on top of the transistor ‘well’ to populate efficiently. Otherwise, you’d have the Poisson distribution problem again, where only about 1/3rd of the wells would have a single molecule, wasting 2/3rds of the real estate. This has been an active area of internal research for some time now, and it is exciting for them to be able to announce that it will become part of the technology portfolio, but a bit far into the future; the expectation was set at ‘in the next 18 months’.

This Avalanche technology, however, will enable yet another generation after the PII chip (the Proton II Chip moniker has been changed as of this meeting to simply PI for Proton I and PII for Proton II, which really helps clarify between the instrument, the Ion Proton, and the chip). The PIII will have about 2x the number of wells of the PII (up to 1.2B wells), and up to 250Gb of sequencing capacity (doing the math that presumes about a 200bp read). Two runs per day means a 500Gb / day throughput.

To put this into perpective, the HiSeq 2000 currently has a 60 – 65 Gb / day throughput (in 10 or 11-day increments). The long-promised 1Tb runs involve longer run-times, and with the longer reads of lower quality there is the problem of not gaining much in terms of overall Gb per day; this can only be achieved with much higher densities. The PII chip that will launch in the spring of 2013, is expected to have on the order of ~60Gb / run, or ~120Gb / day, which about doubles the per-day throughput of the HiSeq.

The HiSeq 2500 hits about that same mark, of 120Gb per 27 hours. That three hour offset might drive people crazy, as the day on Mars is about 39 minutes longer than an Earth day, and for the JPL crew in Pasadena monitoring the Mars Curiosity rover it can do interesting things to family life, inverting their day after only 2 weeks! So the HiSeq 2500 will only run four runs per week, unless arrangements are made to come in on the weekend. (I come up with four by counting thus: Start at 8am on Monday, then Run 2 at 11am on Tuesday, then Run 3 at 2pm on Wednesday, then Run 4 at 5pm on Thursday, which ends at 8pm on Friday, presumably it’s okay to let the instrument sit for the weekend after the run ends.) 4 * 120 = 480 / 5 = 96 Gb/day.

Anyway, back to the PIII, it will no longer use the OneTouch 2 for emulsions, and since Avalanche is a prerequisite it won’t be until Spring of 2014.

A third announcement was around some of the computational efficiency achieved with adoption of multiple electronics technologies, notably Intel’s Xeon Sandy Bridge 8-core technology, Nvidia Tesla C2075 graphics processing, as well as Altera Stratix V Field Programmable Gate Arrays technology with GHz bandwidth. Pretty fancy computation to process base-calls on such a huge scale coming off of the P-series chips.

Arguably at the first day of Ion World there were not any presentations of commercial, user-generated Ion Proton data, which is a valid complaint. Baylor did report performing 274 Proton runs, of course in development mode, and internal data showed 8 runs of whole-exome data with 7.7 – 10.5 Gb of mappable reads per run. Alas, data can’t come quickly enough, and will be something to watch for in the coming weeks.

One thought on “The Ion Chef, Avalanche, and a 1.2 B sensor PIII chip”