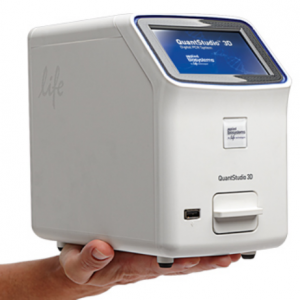 You may (or may not) have heard about digital PCR, which is set to be the next application set to explode in the gene expression market. But Life Technologies has a continuing investment in genetic analysis, and this new instrument, the QuantStudio 3D, demonstrates it.

I wrote about digital PCR before, and at that time there were several options to perform digital PCR (dPCR) via instrumentation – the BioRad QX100™, the existing QuantStudio 12K Flex™ from Life Technologies (as an OpenArray application), and the RainDrop™ system from RainDance Technologies. (RainDance is a company that I worked for in 2009 when they were emphasizing their droplet-based target enrichment system.) Another system also to mention at this point is the BioMark™ HD from Fluidigm, and they have the qdPCR 37K Integrated Fluidic Circuit as a consumable for that device (although to be frank at this point customers mainly evaluate the BioRad and the RainDance systems, as the OpenArray and BioMark systems cost a lot more to perform digital PCR).

Another entry into this market is new product from Life Technolgoies: the QuantStudio 3D digital PCR system. (Interesting tagline: “Absolutely attainable chip-based digital PCR”.) This system has a diminutive size – it is about the footprint of a loaf pan, and about as high (9″ x 5″ by about 9″). And the chips are also correspondingly small – not much larger than a thumbnail, with the ability to fit 12 in a 96-well plate format (or to put another way, they fit in the size that 4 x 3 wells take up).

While reading up on recent market research (this particular one was commissioned by Life Technologies), the penetration within this market is very low, but there is a relatively high percentage of experienced core facility director and senior Principal Investigators who were aware of the application. As vendors start to compete aggressively to both inform the market and win its business, the numbers of that user-base will increase enormously, from an ‘innovator / early adopter’ phase to the ‘early majority’ phase (for those familiar with a ‘Crossing the Chasm‘ reference). And the total available market is very large, as an approximately $700M gene expression market can attest, but digital PCR occupies a complementary function, and as this concept and technology become more popular, additional applications will undoubtedly be created for this technology.

The main applications are rare variant detection, precise copy number analysis, along with absolute quantitation of nucleic acids without the need for the generation of a standard curve.

The success of the Ion Torrent PGM™ has been analyzed last summer (in a perceptive piece by Matthew Herper of Forbes, on a report by stock analyst Jon Groberg of Macquarie Research) that ‘the difference essentially comes down to price’. Differences between the PGM and the Illumina MiSeq™ can be quibbled over (accuracy and ease-of-use are mentioned in the piece as in the MiSeq’s favor), but the difference between the systems ($85K for the PGM and $125K for the MiSeq) drive higher numbers of units in the field for PGM.

But they do miss an important nuance with regard to the PGM: the first is that with the simplicity and specificity of AmpliSeq™ and secondly the speed of the PGM make it ideal for the clinical research / translational research market.

Getting back to digital PCR, this is an important lesson: a low-priced system can drive adoption, speeding up the time involved to pass through the technology adoption life cycle curve. On top of this, ease of use is also a driver, which not only includes technician time / workflow but also data analysis. And when prospective customers are informed about the price and workflow of the QuantStudio 3D, they are pleasantly surprised – I’ll leave it at that.

On a personal note: last Fall yours truly visited the Happiest Place on Earth™ in sunny Orlando Florida. While on the ‘Carousel of Progress’ in the Magic Kingdom™, it was notable how electricity was a newfangled experimental item in ca. 1905, but by the next turn of the stage ca. 1925 the entire household was electrified, from the refrigerator to the sewing machine to the coffeepot to cousin Orville laying in the bathtub with a primitive air conditioner. Once the infrastructure of electricity was established (thanks to efforts of George Westinghouse and Thomas Edison of General Electric), the uses for such technology was widely applied.

(The electrification of the United States and Europe in the early part of the 19th century is a great illustration for the infrastructure war going on right now for the application of next-generation sequencing and genomics in general in clinical applications. For additional background and further reading refer to the War of Currents.) 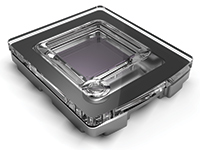 As an example of one theoretical consideration: does going from 20K datapoints to 1M datapoints give a true increase in precision of measurement? From what I’ve seen of reproducibility data, pipette precision and operator variability can play a large factor in the 95% confidence intervals and % CV measurements (on the order of 5%). So it is reasonable to say that a large increase in datapoints may increase precision of the measurement, however the overall accuracy of that assay is handicapped by the upfront variability of the process (i.e. making dilutions of the original sample via pipetting).

Another consideration is total amount of input. Say a 5uL input goes into the RainDance system – for a ‘one in a million’ rare variant measurement, that represents a single haploid mutation of a gene within a background of a million other non-mutated copies. If 1 haploid genome = 3.3pg, then a million copies is 3.3ug (pico = 10 minus 12 power; micro = 10 minus 6 power). Will you really be able to get 3.3 ug from an FFPE sample? And then be able to get a 3.3ug / 5ul = 660 ng/uL concentration from that?

But if the market dictates the need for more datapoints per sample, the technology used in the QuantStudio 3D is scalable – it is a derivative of the OpenArray™ concept. Put very simply, imagine a screen from a screen door, and using a squeegee to put in a tiny amount of sample plus PCR master-mix into each square. The chips used in the QuantStudio 3D have the potential to scale to fit the market need as needed.

Lastly consider where digital PCR fits into the world of gene expression: for a single target, you can get very accurate DNA copy number (a limitation of qPCR), or absolute quantitation of a DNA or RNA target without the need for a standard curve (great for virus quantitation). So view these platforms as complementary to the existing collection of gene expression tools in the toolbox.