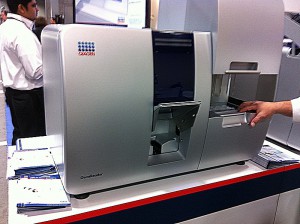 The QIAGEN GeneReader at AACR (April 2013)

Earlier this year at the February AGBT Conference, a person from QIAGEN came over to the Ion Torrent suite and asked me a few questions about the Ion Proton and in particular the upcoming Ion Chef unit. (The Ion Chef for those not familiar with it can replace the OneTouch 2 automated template preparation instrument with another one that will not only perform the emulsion PCR but also enrich the ion sphere particles, and load the chips as well.)

Afterwards I was invited to take a look at what QIAGEN had just announced, a next-generation sequencing platform ‘for clinical research and diagnostics’, which they call the GeneReader. About the height and similar width of one of their larger BioRobot liquid handling systems, the GeneReader is the result of using Intelligent BioSystem’s diluted sequencing-by-synthesis terminator sequencing technology who QIAGEN acquired in mid-2012.

Intelligent BioSystems announced in March 2012 (at the Association for Biomolecular Resource Facilities meeting in Orlando Florida), which at that time was being marketed by a small company in Oceanside (California) called Azco Biotech. After speaking with the folks from Azco, it was clear that this system was designed to be competitive in its pricing (using a clever diluted fluorescent method) and flexibility around individual flowcells. (These flowcells can be independently run, and additional samples can be added on any ongoing synthesis cycle; if given sample is not set to complete its runs for another 10 hours, another sample can be started while the first sample continues its run, up to 20 samples.)

According to the CEO of Intelligent BioSystems, at that time they were anticipating  20M to 400M reads per flowcell, in a 20 flowcell configuration, in an instrument whose expected price of $120,000. Each cycle was estimated to be 12 minutes per base, so a 50-base read would be a 10 hour run. In March 2012 they were expecting a commercial launch before the end of 2012.

Fast-forward to the present, QIAGEN says they are looking for early-access customers in 2013, as they fine-tune their system in preparation for a commercial launch in early 2014.

However, they had no information to share about throughput, costs, or readlength. (The system price was not readily available either.) I was told that from a current early-access customer base of about ten currently, they want to expand that footprint to about three times that size before the end of the year. 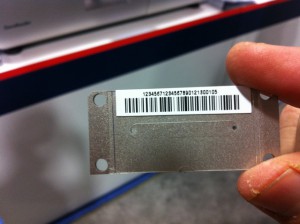 The photo nearby is one I took of the individual flowcell, that gets loaded into the system. The volume involved is very small, on the order of 10 uL, and according to the original IBS talk last year, the concentration of the labeled-to-unlabeled nucleotides are on the order of 1:100.

What was nice about this system is integration of QIAGEN’s QIAcube systems, one for library preparation, and another for template preparation. It appears that they will be using emulsion PCR, although rolling-circle amplification has been mentioned as another template preparation method on this system. Another strength that QIAGEN brings is bioinformatics; it was estimated that with a size of 20 employees, Intelligent BioSystems would encounter difficulties in scaling up. (QIAGEN has since announced a partnership with the German enterprise software provider SAP on their new HANA platform for analytics, but applied to NGS data.)

There are many of the ‘conventional wisdom’ camp who are quick to dismiss QIAGEN’s entry into the next-generation platform market. Namely,   a friend from a large clinical diagnostics company told them “you guys are so late to the market, who is going to buy one of these systems?” However, upon further reflection, the existing customer who has invested a considerable amount of time and effort to implement an NGS system (and in addition to the wet-lab chemistry all the informatics that have to be built around it), is not QIAGEN’s target customer, although of course it is to this audience they will be targeting at first to gather feedback and refine their offering. The target customer is going to be the ‘new to next-gen’ customer, and the task that QIAGEN has set before it is to lower the costs and time it takes to adopt an NGS workflow in the clinical research market.

It is not an easy task to undertake; both Illumina and Life Technologies spend 10’s of millions if not over $100 million USD annually apiece on that same effort (in system chemistry improvements, automation, and bioinformatics, as well as content development and a host of other development efforts). And QIAGEN will learn how high the barriers to entry are in this business segment; Pacific Biosciences burned through hundreds of millions of USD to get to their present state.

And SAP certainly understands the enterprise customer, having sold sophisticated Enterprise Resource Planning software and being very successful at it for many years. However, if genomics data were as interchangeable as financial and other kinds of existing business data, then Oracle, IBM and other large software firms will have an exciting future in this segment. Alas, such is not the case, and the economics of next-generation sequencing software analysis makes their business model difficult.

This upcoming GeneReader system is the next system set to launch, other than the Oxford Nanopore system (supposed to have been launched by the end of 2012 but has been delayed until future notice). And as such it provides another affordable benchtop alternative to the existing Ion Torrent PGM and MiSeq platforms in the targeted sequencing segment.

With the deep pockets and commitment to this market, QIAGEN has demonstrated it is in this market for the long-term. Stay tuned for updates!

5 thoughts on “The next NGS platform – the QIAGEN GeneReader™”