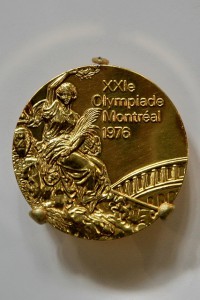 Today I learned that Charles Lindbergh flew non-stop from New York City to Paris in 1927 as a result of a $25,000 prize put up by a hotel owner, Raymond Orteig, way back in 1919. Worth some $325K in 2012 dollars, the prize was renewed in 1924 when the technology was advanced enough so that winning it became feasible.

Piloting alone for 30 hours, although not a requirement for the prize, was a feat that captured the imagination of a nation and started a commercial boom as public interest in air travel soared, along with the stocks of the companies that made aircraft.

Inspired by the Orteig prize, the Genomics X Prize was designed with a similar technological goal in mind. Together with $500,000 from the J. Craig Venter Institute, this contest offered a $1M prize to any organization that would “significantly advance automated DNA sequencing toward making the $1,000 genome a reality.”

In late 2003,  they noted at the time a $25M cost to sequence the human genome at 5x coverage. (This coverage is assuming long Sanger reads.) At that time they wrote “It is necessary that these cost decrease significantly toward the $1,000 mark. Once this threshold has been reached it will be feasible for the majority of individuals to have their genome sequenced and encoded as part of their medical record.”

The individual behind the Archon Genomics X PRIZE, entrepreneur Peter Diamandis, first offered $10M in 1996 for the first private spacecraft to send a 3-passenger crew 100-km into space twice in the span of two weeks. (In case you were wondering, I have no idea why this group insists on writing ‘PRIZE’ in all-caps.) This first offer was called the Ansari X PRIZE for Suborbital Spaceflight, and won by Mojave Space Ventures in 2004. (Ansari was the name of the first female private space explorer.) Eventually, five other prizes would be offered, for goals as diverse as 100 mile-per-gallon fuel efficient automobiles and putting a robot on the moon.

As far as the original Genomics X PRIZE, the $1M prize was never awarded, and a few years later in 2006, a new Archon Genomics X PRIZE, was announced. (This time, the name Archon is after another entrepreneur Stewart Blusson’s concern Archon minerals, who was a major donor). The winner’s goal: to take 10 days and to sequence 100 human genomes, at a total cost of $1M (or $10,000 per human genome), to win a larger $10M prize.

The standards for the completeness of the genome sequence was set to be very high: 98% coverage, and 99.99% accurate (that is one error in 10,000 bases). Insertions, deletions, rearrangements, copy number variants (CNVs), were all to be included. Several groups stated their interest in participating, but this iteration of the Genomics X Prize wasn’t awarded either.

With that minimum requirement, it becomes a feasible project, given the current costs of NGS, and the timeframe of 30 days for 100 samples is also reasonable enough.

Regarding the selection of these 100 samples, this is where definite and tangible practical benefit has been designed into this contest. Centenarians (individuals whose age can be certified to be >105 years) will be selected from eligible volunteers, fully consented with phenotype, medical and drug histories, and for some cases willing to be interviewed and filmed for educational purposes.

On top of this, the selection of individuals will be on purpose as ethnically and geographically diverse, and immortalized cell lines prepared through Coriell (a respected cell repository).

There is one other genomic study of healthy aging from  The Scripps Institute and Complete Genomics, called the Wellderly Study with 1,000 samples, but the age limit is set at >80 years, and while announced last October 2011 there is no publicly-stated end-date.

A validation protocol will be established, representing a “universally applicable method that is independent of the technology used to sequence”, which randomly selects out regions to sequence using alternative NGS, and then verify any discrepancies using Sanger and genotyping arrays.

Lastly, this valuable dataset and the informatic pipelines used in its generation will become publicly available, with the goal that the validation protocol becomes a standard of quality. These genomes may well become the most deeply sequenced human genomes ever, with many groups using (perhaps) different technologies at sequencing depths to raise the accuracy very high. Combining datasets, and cross-correcting any errors that will occur, will be a certain outcome.

There remains some challenges in defining what the ‘finish line’ looks like, as the goal isn’t as simple as whether a plane makes a non-stop flight from NYC to Paris; the very definition of a ‘complete’ human genome I’ve written about before, is a slippery topic, and one with many parameters. Yet the resulting dataset’s quality will be very high.

There are other prize-based genomics contests, and the largest cash prizes (please correct me in the comments if there are larger ones) are the ones that Ion Torrent is sponsoring through the Innocentive website. $1M to the group that can double the base output of a PGM chip (above the internal ‘record yield’ in a given quarter), and $1M to the group that can cut the sample-preparation time in half (again above the internal ‘record shortest time’ in a given quarter). Take a look at some of the other genomics-based incentive prizes – perhaps you could work on it in your basement laboratory (or during the evenings and weekends since we all have so much time to spare!).

Like the Lindburgh flight, the ability to capture some of the public’s imagination and to publicize a great technical accomplishment for the benefit of society is a good thing. And along the way, if a breakthrough discovery in the key variants that aid in longevity occurs, we’ll be all the better for it.