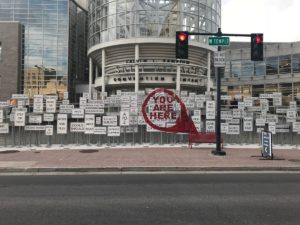 John Iafrede (Massachusetts General Hospital, MA) “There is a tidal wave of cell-free approaches; little performance testing; and the big question is who is going to pay for it.”

This year’s Assocation for Molecular Pathology was held in Salt Lake City, Utah from November 15-18, 2017. (You can find the 2017 program and abstract here.) With about 2,000 attendees and over 180 exhibitors, it attracts molecular diagnostics professionals worldwide, and in addition to its leading journal (Journal of Molecular Diagnostics) also conducts many key advocacy roles, including reimbursement, legislation, and other vital topics.

One unique dimension of the AMP conference is that the organizers have long held a full day of workshops the day before the conference begins. Open to anyone, many parallel tracks from vendor talks run from 8am through 5pm. This year there were no less than 56 companies (a full brochure is here as a PDF) with no less than a potential 11 simultaneous workshops occuring during the same hour!

So you can imagine the choices you have to make.

Liquid biopsy (and to be clear here the reference is to circulating tumor DNA analysis as circulating tumor cell analysis is further away routine laboratory implementation) is of high value due to its non-invasive nature. Patients may be in too poor a condition for surgery, or the tumor is inaccessible; invasive biopsy is not practical for monitoring for recurrence or progression. In addition, liquid biopsy can provide a read-out on tumor heterogeneity, is much lower in cost (a typical biopsy in the United States was cited by one speaker to cost $37,000) and yields results much more quickly.

Anyway I chose to attend a Roche presentation entitled “A Lab’s Perspective from Evaluating the New AVENIO ctDNA Analysis Kits”, where a lab director Dr. Shelly Gunn from a companion diagnostics service provider ResearchDx shared their early-access experience. (The AVENIO assay is the re-branded name for the CAPP-Seq technology Roche acquired from CAPP Medical, a Stanford University spinout, in 2015.)

A few interesting details came out of her presentation: the input is 4mL of plasma and will assay for SNVs, indels, CNVs and fusions; the ‘product 1’ and ‘product 2’ they tested along with two other laboratories are the targeted 17-gene and expanded 77-gene panels; and the informatics was offered as a standalone server with interpretation and reporting functions. (Several times it was emphasized that this is a Research Use Only product.)

Tested with 60 samples, she was able to show good sensitivity of detecting fusions to down to 1%; my notes are unclear here but if memory serves correctly there was 100% concordance down to 0.5% yet not lower. Also the on-target rate reported was on the order of 76%; speaking with a friend afterwards, apparently the assay has had difficulty in getting their on-target rate high enough to commercialize. (This product has not yet launched.)

One key benefit for ResearchDx was enabling them to ‘enter the liquid biopsy era’ without having to develop their own assay and accompanying informatics themselves, which is a substantial undertaking.

Thermo Fisher Scientific also had a presentation entitled “Latest Innovations and Case Studies in NGS-Based Solid Tumor Profiling and Liquid Biopsy Research”, and had two presentations from Cancer Genetics Incorporated. Dr. Daniel Duncan (their Medical Director) spoke about the recently FDA-approved Oncomine Dx Target Test and their experience with it. Of note was their Core Needle Biopsy (CNB) for NSCLC data, where n=1,029 for number of samples analyzed, a full 25% of these had less than 25% tumor content, and all were successfully analyzed.

A second speaker from Cancer Genetics was Dr. Charles Ma, their director of molecular diagnostics. His talk, entitled “Cell-free DNA and lung cancer clinical research”, laid out their implementation of the Oncomine Lung cfDNA assay which launched in mid-2016.

Dr. Ma showed 85% sensitivity data and 99% specificity data down to 0.1% for the genes in the Oncomine panel, along with reported allele frequencies down to 0.15% and 0.08% in the samples they analyzed at 50,000x coverage. He then went through several case studies where treatment for NSCLC was changed, such as detection of a resistance mutations in EGFR.

One point Dr. Ma was careful to emphasize was the strict cut-offs they set in order to elimnate (as far as they can) the occurance of false-positives. If they cannot find the same mutation in two differently-barcoded molecules, nor find that same mutation in the tissue biopsy sample, they will confer to access an additional sample.

Dr. P. “Mickey” Williams of the National Cancer Institute gave an update on the NCI-MATCH project that he called “The Challenges of Development and Application of the NCI-MATCH NGS Assay”. Described as a ‘signal-finding trial’ and announced in mid-2015, this trial included 20 different study drugs or drug combinations together with specific genes in Phase II clinical trials.

With an initial four centers (NCI-Frederick, Yale, MD Anderson and Massachusetts General) and recently adding a fifth (Dartmouth), they originally started on the Thermo Fisher Scientific Oncomine v1 panel, and as they had multiple site they would migrate to newer v2 and v3 content, re-validating their assay as other sites would be running samples as other sites were offline for laboratory test validation.

One interesting point was their results from an NCI Request for Proposal (RFP) issued in 2012 as far as what clinicians wanted: low-input requirements (from core needle biopsies), accurate somatic variant calling from FFPE tissues, rapid turnaround time (TAT), and ability to call SNVs, indels, CNVs and fusions.

Their validation data was strong, recapitulating what was published earlier this year in the Journal of Molecular Diagnostics. One interesting point was a single lab getting only 80% sensitivity to pick up a copy number variant; their cut-off for detection was greater than five copies, while the sample had only 3.7 copies.

With over 6,000 samples analyzed to-date, an 18% ‘match rate’ of genetic mutation to targeted therapy in a clinical trial, and an 16-day TAT, one later commented that ‘small laboratories can get the same (high-quality) results that large ones do’. In addition, Dr. Williams pointed out that 20% of their samples were ‘problem ones’, where there was no pathology report accompanying the sample, or there was no tumor cells in the sample sent.

One other challenge was several arms not having enough samples, and one arm having no samples at all; the lower-than-expected variant frequencies was attributed to their patients already having undergone previous treatment. One patient had undergone no less than fifteen treatments before enrolling in NCI-MATCH.

This conference would not be complete without advanced topics of interest to the molecular diagnostics community, and Dr. Todd Druley from Washington University, St. Louis MO gave an interesting presentation called “Single Molecule Quantification of Rare DNA and RNA Variants in Heterogeneous Samples”.

Using a 16 basepair unique molecular identifier (UMI, or barcode) of their own development (here’s their method published in the journal Leukemia in 2015) they expanded their method to modify an existing targeted panel, the Illumina TruSight Myeloid Sequencing Panel, to look at decades-old samples from the Nurses’ Health cohort with much greater sensitivity than previously reported for mutations in genes such as DNMT3A and TET2; 95% of their samples had clonal mutations in contrast to much lower percentages in prior work. This Nature Communications publication from 2016 outlines their results with this method, reporting detection as rare as 0.0003 allele frequency, or 0.03% (that is 3 parts in 10,000).

Their group’s overall goal is to build a ‘sequencing toolbox to improve MRD detection and precision therapy selection for pediatric AML’.

Pillar Biosciences had our first exhibit presence, and a poster presentation by Dr. Fran de Abreu from Dartmouth entitled ‘Evaluation of the Pillar NGS SLIMamp Cancer Hotspot Panel’. For updates on our progress, be sure to sign up here.