At the recent Next Generation Diagnostics Conference in Washington DC (#NGDx18) Two Pore Guys had a nice exhibit where I had the privilege of meeting Tyler Shropshire Ph.D., their Sr. Scientific Manager of R&D. It was March of 2017 when I first wrote “A handheld single-molecule diagnostic platform Two Pore Guys” and reviewed the context of handheld molecular devices, the basics of 2PG’s detection platform, and their emerging business model.

Now they’ve been able to further refine the platform in several dimensions that will be covered here: the use of a single nanopore; the ability to discriminate along the dimension of DNA length and type of PEG-modified bases (incorporated in the up-front PCR step); and the availability of laptop-powered software and the nanopore chip-reader device.

Use of a single nanopore

Although Two Pore Guys was founded on the principle of dual nanopore devices, most of their current applications use only one pore. The benefit of one pore is simplifying the manufacturing and thus lowering the cost of their disposable nanopore sensor test strip simultaneously. A video presenting the technology on their website (accessible here) states ‘less than $1’ for the cost of the chip; as a readout device this price-point (excluding the costs of the assay technology, whether antibody- or PCR-based) is very attractive.

The nanopore size used in their in-booth demo was about 45nm in diameter. This is an important point because traditionally nanopores have been thought of in the context of sequencing (e.g. Oxford Nanopore), but robustly producing solid-state pores at the size needed for sequencing is neither robust nor economically viable. Thus Oxford Nanopore uses biological nanopores, with sophisticated enzymology in order to slow down the travel of DNA through the nanopore, separated by a lipid bilayer.
Two Pore Guys has a technology (and its attendant foundational IP) enables the detection of a variety of molecules in larger solid-state pores that can be produced at the existing integrated-chip manufacturing technology at a “wafer scale” robustly, reproducibly, and for very low cost (pennies per solid-state nanopore chip).

Discrimination along length of DNA

DNA is a long, highly charged macromolecule. For those who remember the April 1953 paper, ‘A Structure for Deoxyribose Nucleic Acid’ by J.D. Watson and F.H.C. Crick, by aligning all the negatively-charged phosphate groups to the outside, and the hydrophobic bases on the inside, you get about 2.3 nm for the width of a DNA molecule. At 3.4 Angstroms per base (credit again to Watson and Crick those many decades ago), for 100 bases that’s 340 Angstroms or a 34 nm long piece x 2.3 nm thick going through the pore.

By taking many measurements of the electronic current over time (up to 250,000 reads per second, or 1 every 4 microseconds), 2PG can detect differences in DNA chain length (i.e. PCR products for their first proposed applications) on the order of 30 bases apart. Thus, if you have six different amplicons, at 30, 60, 90, 120, 150 and 180 bp in length, you have six parameters that can be measured (say variants, or species of infectious agents) on the basis of length.

Read of events translocating through the 2PG nanopore: each downward spike represents a molecule interrupting the current flow. 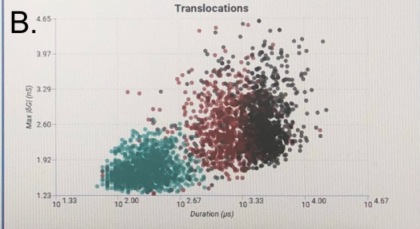 Multiplexing is fully within 2PG’s capabilities. By detecting, differentiating, and quantifying DNA amplicons in a nanopore using an electrical nanopore sensor rather than with an optical readout (such as used with conventional real-time quantitative PCR technology), the 2PG nanopore technology could be much cheaper, faster, and more sensitive than the current state-of-the-art in PCR amplicon detection methods. Indeed, Tyler reported successful examples of applications that meet or beat traditional fluorescence-based assays on each of those parameters.

Other dimensions to discriminate

In addition to distinguishing DNA fragments from one another by length, “tags” can be incorporated into the PCR process, thereby labeling the DNA and allowing additional multiplexing capabilities. Polyethylene glycol (PEG) is a commonly used chemical for precipitation methods in plasmid isolation, as well as protein crystallization. (The list of uses of PEG in different medical, chemical, commercial contexts is, well, encyclopedic.)

2PG is able to incorporate different types of polyethylene glycol ‘chains’ into DNA amplicons as a “tag” that is sensed by the nanopore, which in turn provides a unique event signature as the amplicon travels through the nanopore. This method is another parameter that can be varied besides length to create distinct populations. A simple situation would be if you had two fragments of DNA that did not vary in length, but rather contained a single mutation such is the case in liquid biopsy (wild type vs mutant). One unique PEG tag would be used to identify the mutant fragment in relation to the wild type.

Two Pore Guys is working on the potential of additional tags, and as they are still in development it’s hard to say exactly what the limits are in terms of number of parameters in just these two dimensions, or to say other dimensions with discrete conductance properties, such as nanoparticles of different types could also be a third dimension.

If you have six different lengths you can discriminate between as mentioned earlier, and two different PEG chains that you can discriminate three different states (that is, PEG chain 1, PEG chain 2, and no PEG as a third state), you now have a readout of 18 different parameters. In the case of liquid biopsy, that would be detecting 9 different mutations (9 wild-type and 9 mutations across the 18 parameters).
As shown in the in-booth demo, they have demonstrated multiplexing 3 to 4 target amplicons by length in a single nanopore. They showed a prototype of adding multiple nanopores within the test strip to run several samples at once.

At the Two Pore Guys exhibit, a research scientist was observed pipetting from a PCR vial into the salt buffer required to run the sample, and then loading this into the test strip and putting the test strip into the instrument. One of the strengths of the technology is its insensitivity to the enzyme and buffer reagents (including unused oligos) from the polymerase chain reaction – no sample processing post-PCR is necessary. Thus, a small amount of PCR product is added to the system, and in about 20 seconds the readout is made. 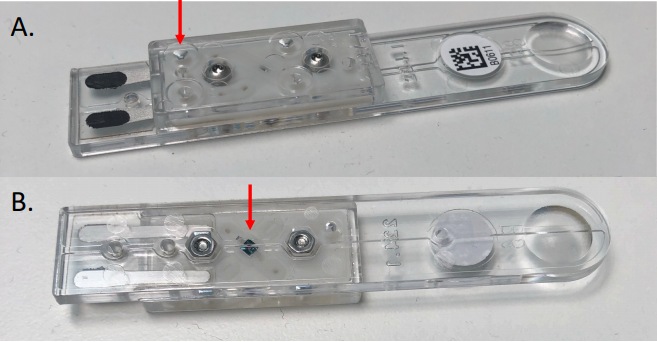 There are many benefits to this approach – for example, in the ‘Point Of Care Testing’ (POCT) market, clinicians might not have access to a centrifuge (for a silica column-based cleanup for example) or might need a liquid handling automation to process a magnetic-bead cleanup step. A multi-sample, multi-analyte assay with a fast readout lets you quickly process many samples, even manually. While 2PG could very easily be an excellent downstream sensor for already-existing diagnostic tests that rely on optics (Biofire a division of bioMerieux, Cepheid a division of Danaher, and Roche’s cobas LIAT come to mind, and there are others such as BioCartis Idylla), 2PG reported that they have a full sample-to-answer product in development for a number of their partners.

On a side-note note, for the POCT market the term ‘sample-to-answer’ means the sample preparation (purification of DNA or RNA from the original sample, typically a nasal swab or blood sample), PCR amplification, and readout of the amplicon products for interpretation is all integrated in the device or consumable.

Observing their assay developer software, you see the raw electrical signal, and the differentiation in length (shown is a representation of a run with different colors representing different molecules with different lengths as a dot plot). The software runs on a laptop, and it did not appear to be too much computational horsepower required to analyze this signal from the small brick-sized reader unit (it was about the size of a deck of cards perhaps three decks high, where it appeared that the cooling fins took up 1/3 of the volume. 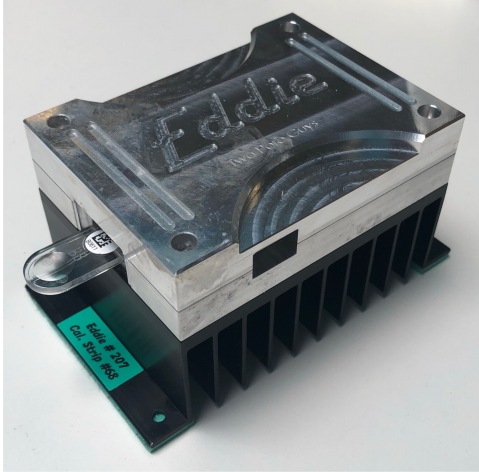 The reader did not appear to have much going on; once you load the sample onto the chip (literally 4 microliters of PCR product diluted 1:100 is all that is required, i.e. 0.04 ul of a PCR reaction), there’s only current that drives the molecules through the nanopore and electrical signals being read back into the laptop. I was told that the chip reader is basically a PCB board with chips on it, in addition to a microcontroller, and an amplifier all connected to a power supply. Considering this, you have a total device with the nanopore chip in their test strip for about $1, and reader device that is estimated to cost $500.

This rather simple device (it is a solid state chip and electronic reader after all) is capable of performing a wide range of assays including detection and differentiation of DNA fragments by size and other labels for detection of PCR products, and even the potential for protein/analyte detection. Though not demonstrated at the booth, I was told that the company is working on a two-pore device capable of genome mapping (reminiscent of what Bionano Genomics is doing and what NabSys tried to do), and eventually DNA sequencing.

Where they go from here

Two Pore Guys may well find its first application to vertical non-human markets, such as specialty plant-modifying companies for inexpensive (and fast) variant detection where a 4-plex target test could be performed at a very attractive speed and price point. 2PG has a publicly disclosed a developmental agreement with Monsanto (Bayer). < https://www.genomeweb.com/applied-markets/monsanto-inks-deal-evaluate-two-pore-guys-nanopore-sensor-system> As a data-point, not that long ago I remember how attractive OpenArray technology (BioTrove technology acquired by Applied Biosystems then turned into a QuantStudio offering some years later) where several dozen markers by real-time PCR were great for the pharmacogenomics market when the per-sample price approached $1 per genotype. Of course, this is apples-and-oranges as the “agriculture application” has yet to finish development, but this gives you an idea of why this technology could be disruptive and quickly adopted.

A. Live feed of DNA molecules translocating through the nanopore; B. Plot of DNA events in real-time, time on X-axis, current change Y-axis; C. Processing of electronic signals to make a positive call (22 sec total time)

Another way this technology could be adopted would be to combine with other sample preparation and amplification technologies in the human diagnostics space. PCR requires thermal cycling and time; isothermal methods such as RPA or LAMP for infectious disease could be developed to integrate assay with the electronic nanopore readout. As for the POCT market as mentioned before, to integrate sample-to-answer each of those systems relies on optics which can make them much more expensive and complex, and much larger (relatively speaking) due to requirements for both the electronics and optics.
The nanopore sensor at 2PG and their mechanism to detect DNA amplicons electronically could be used downstream of existing sample prep technology in a much cheaper, portable, and more rapid manner. 2PG could also choose to develop that themselves and is reportedly doing just that. All that does is take time and add complexity, but it does offer an attractive path forward.

Certainly, stay tuned for more from them!