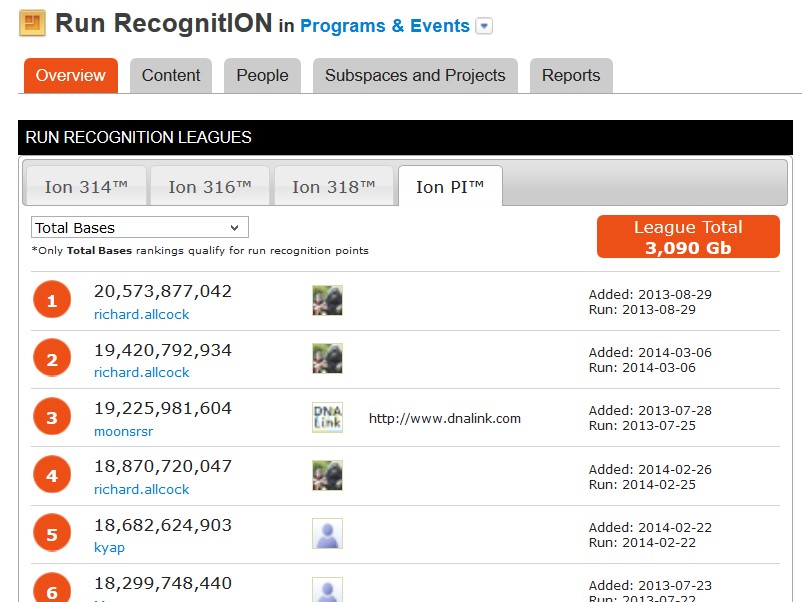 Record PI runs with a 20.5GB at the top, from the Ion Community site

There has been a lot of publicity around the NextSeq 500 from Illumina, and it appears to have been designed to compete directly against Ion Torrent’s upcoming PII chip. Thanks to a visit to upstate New York last week, I met Dr. Sridar Chittur who told me how important it was to put current information out on this blog, and if I can put out the disclaimers up-front it would be very helpful for those thinking about what benchtop system to purchase over the next several months.

First of all, the upcoming Ion Torrent Proton PII is coming out later than expected. We were told (and told customers) when the PI came out in early 2013 that the PII would be six months after the launch of PI.

Where is the PI now? Today customers routinely get 70-80M reads per run, at a readlength on the order of 150+ base-pairs long, or at least 10GB of data per run.

If you access the ‘Run Recognition’ section of the Ion Torrent Community, the highest throughput PI runs are currently (as of March 2014) 20.5GB, the longest perfect alignment is 334 bases, and the maximum number of reads tops 108.8M. These ‘leaderboard’ numbers will give you an idea of how the best runs are performing, while the throughput of a nominal user will steadily increase to where the best runs perform over time.

On top of this is the promise of longer reads and higher accuracy. A new enzyme called HiQ™ is in early-access testing; information about all of our early-access testing programs that also include Rapid Isothermal Amplification along with a 16S metagenomics solution is found here. At AGBT we reported that this HiQ enzyme reduces insertion errors about 60-70%, and deletion errors on the order of 30%. Ion Torrent will initially release HiQ for the PGM and its 3-series chips, with PI and PII after that.

The PII chip is currently in development, and PII chips have been manufactured and produce data. Alan Williams (head of Ion Torrent R&D) presented this at AGBT, where he stated that key milestones have been met (in particular getting a 5 gigabit data throughput off the chip into the Proton electronic architecture, no mean feat as that represents the equivalent of 50,000 simultaneous HD television streams). However he was only able to show a representative 1/16th of the existing iteration of PII chip, and some minor engineering optimizations are needed before a PII chip can be commercialized.

Ion Torrent expects the PII chip to enter early-access this summer (2014), and commercial launch would depend upon those results.

But even data from 1/16th of a chip (presumably the ‘best’ 1/16th slice) is telling – a 91bp and 119 modal readlengths from two human DNA fragment library runs, and a 77bp modal readlength from a whole-trancriptome (RNA-Seq) run. Extrapolating the number of reads to 16/16ths (and entire chip), the number of reads ranged from 296M to 342M reads. (Compare this to an expected read number of about 240-320M for the PII, and for the curious the current PDF of the Proton System spec sheet is here.)

The difference between PI and PII is that the PII has four times the number of wells (increasing from some 165M to 660M), and a corresponding decrease in the size of the Ion Sphere Particles™. Given the number of reads on the PI started in the low end of the 60-80M reads/run specification, let’s presume the PII launches with about a 240M read/run (low end of 240M – 320M range), and about 100bp readlengths.

What does this mean for the end-user, and how does it compare? Let’s look at whole-transcriptome sequencing first, where read number is paramount rather than total throughput in basepairs.

The Proton will output 240M reads in 4h, at a cost of $1,000/run. (Clarification – this is only sequencing time, not template preparation plus sequencing time, so the template plus sequencing time is about 8 hours.) On a cost-per-million reads basis, this is 1/4th the cost of the existing PI chip (the PI chip also costs $1,000/run for 60-80M reads). The new NextSeq 500 in its most efficient ‘high throughput mode’ is $4,000/run for 400M clusters, presumably slightly less expensive for single-read instead of paired-end, and also slightly less expensive for shorter reads for fewer SBS cycles, but major costs are in the clustering and flowcell pieces. Even if that price is reduced to $3,500/run for 400M single-end, 1×75 bp reads, that’s still a good $875 per 100M reads on the NextSeq, whereas the PII prices out at $416 per 100M reads (that is, $1,000 / 2.4 x 100M). So there’s a 2x markup on a per-read basis. And the time for template preparation (that Illumina calls clustering) plus sequencing is 15 to 18 hours.

So the appellation “cheaper to buy, cheaper to run” holds for the Proton. (The comparable system list prices are $239K for the Ion Torrent Proton versus $250K for the NextSeq 500; there is a low-throughput mode on the NextSeq 500 that lowers the cost to run the instrument but at a relatively high per-read or per-GB cost.) You can also add “faster to run” too – about half the time.

What about on a whole-exome basis? Here the PII will be at a disadvantage as the Ion AmpliSeq Exome needs the 230-250bp readlengths as mentioned earlier, and it will take some time to optimize and develop the PII sequencing to get basically double the readlength from launch. There isn’t much doubt that this will improve over time, just like the PI and the 3-series chips on the PGM (314, 316 and 318) before that.

What about sheer per-GB cost at the PII launch? At 240M reads and 100bp readlengths, that represents a throughput of 24GB for $1,000/run. The NextSeq 500 in ‘high throughput mode’ (that is in the most efficient sequencing mode 2x150bp paired-end reads), the yield is 100GB for $4,000. So at launch the per-GB cost is essentially the same, and when AmpliSeq Exome attains a 250bp readlength the relative price differential can easily be 2x. (You can be assured that the NextSeq 500 will increase its readlength and density over time, however at what rate remains to be seen.) 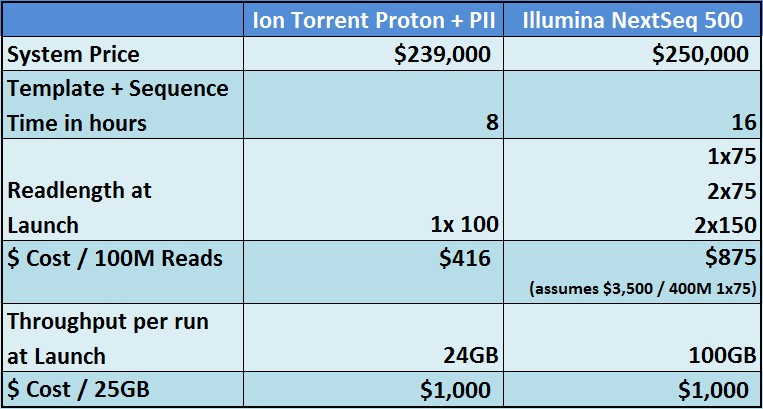 Chart comparing the Ion Proton PII and the Illumina NextSeq 500

So I’ve put together this simple chart, which summarizes what I’ve written out above, based upon some straightforward reasoning. I can go on and on using fear, uncertainty and doubt about the NextSeq 500’s base-calling of G residues on the basis of an absence of signal, but instead would take this moment to point out that it will take many months of effort and modified (or altogether new) tools to adjust to a new instrument and new chemistry, when users choose not to use the vendor-supplied software pipeline tools. This is similar to when the Ion Torrent PGM first arrived and complaints arose regarding poor-quality data when aligners other than TMAP were used, as they were tuned for a different platform. I remember early users using GATK and being very dissatisfied with their results.

Lastly, a note of observation.

The world of consumer behavior has changed enormously with the wide availability of information. It wasn’t that long ago when if you wanted to find out about a new product there were limited channels of communication; now it seems like everyone has an opinion and are willing to take the time and energy to share them. There seems to be something of an explosion of anonymous blogs, where who is behind it is impossible to determine, by design.

And now in addition to anonymous blogs, there are experts who make commentaries on a sequencing technology conference (namely AGBT) they didn’t even bother to attend; there is an individual writing Twitter messages as if it was her own yet with questionable science credentials; and there are yet others who rip content off from others just to monetize traffic to their website.

It’s a bit of a sad state of affairs with such low barriers to entry. (All it takes is some time and effort behind a keyboard.) There needs to be more genuine, authoritative voices that are quality, original sources of information.

11 thoughts on “The upcoming Proton PII and the NextSeq 500”