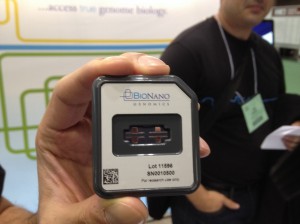 Almost a year ago I wrote up this post about a startup called BioNano Genomics, which was hard at work launching a nanofluidic device and scanner called the Irys™. At February’s AGBT meeting in Marco Island (FL), they presented a scientific poster about the spider mite genome. Tetranychus urticae has a lot of interesting features, including being an important agricultural pest. Now I don’t have anything against entomology per-se, it is just that the capacity of a genetic analysis system will need to look at humans (at 3 gigabases for the haploid genome), rather than insects (T. urticae is on the order of 90 megabases, and today I learn that it is the smallest arthropod genome sequenced to-date).

So there have been some developments in the meantime – their main competitor, OpGen, has reorganized their commercial management (i.e. asked people who were in charge of sales, marketing, and several of those working for them to work elsewhere), and have teamed up with Hitachi High-Technologies to sell an OpGen fee-for-service business. If Hitachi sounds familiar, they have been working with Applied Biosystems since 1997, and way back in 2004 launched the 3130 and 3130xl Genetic Analyzers at ASHG in Toronto (naturally), and showing signs of starting to develop an independent life sciences business of its own.

BioNano Genomics (hereafter given the TLA of ‘BNG’, where TLA = “Three Letter Acronym”) is tackling a rather difficult problem in genomics, which is determining large-scale rearrangements and where possible haplotype phasing. (Here’s a nice open-access paper in Nature Reviews Genetics from 2011, discussing computational methods and identity-by-descent for this purpose.) This poses two fundamental questions that arise for any potential business to start up around it: what problem does this product or service solve, and what are the alternative solutions to solving this problem with something else?

While thinking about ideas for new businesses (or perhaps more expansively, entirely new categories of businesses), think about the problem you want to solve that customers are willing to part from their scarce resources to obtain. (Resources in this context includes researchers’ hard-won grant funds, as well as their time and opportunity costs in trying something ‘new’ versus using that time and effort into something they have done before.) And for BNG, one of the problems they are tackling is large-scale structural variation in the human genome.

Copy Number Variation (CNV) and its importance in genetics blossomed when high-density SNP arrays and Array Comparative Genomic Hybridization (called aCGH) came on the market around 2005, with an adoption into clinical cytogenetics to look at chromosomal aberrations. Older techniques such as Fluorescent In-Situ Hybridization (FISH) is well-established here (adoption in the 1990’s), and CNV analysis is also used to get better resolution and thus can be viewed as a complementary technology. Other technologies of course can be used to interrogate CNV’s – in particular real-time PCR and digital PCR – so there are no shortages of options to look at CNVs, just a matter of how fine a resolution (is it on the order of looking at a specific region where megabases are deleted suitable for FISH or a particular gene that is duplicated), how specific the assay (by this I mean for example a TaqMan Array Card for 100’s of CNVs to look at specifically, or a QuantStudio 3D assay for one target), and of course the cost and time associated with each technology. Precision of the measurement is also another variable for all of these technologies, and is another factor that plays a role in its utility.

And of course I would be remiss to neglect the interest in using short-read NGS for CNV analysis. Statistically difficult, here’s a Nature Methods paper from Gad Getz and Eric Lander at the Broad Institute with an approach called SegSeq; here’s a Nature Methods review paper that I’ll throw in as an added bonus. But recently on the targeted selection front, AmpliSeq does such an even job of amplifying across target regions, that using a Ion Torrent PGM™ on an AmpliSeq™ targeted panel software has been developed in the context of Ion Reporter that now performs CNV analysis. (If you are interested, here’s the Ion Community page along with a PDF of the application note that gets into the details around CNV using Ion Torrent.)

There is a need for understanding exactly where that genomic region is multiplied (thus adding additional copies), but it remains to be seen whether this kind of spatial genomic rearrangement information is a ‘need to have’ application. Of course there are deleterious rearrangements (i.e. bcr-abl), CNVs that directly affect disease and health (thus the application into clinical cytogenetics laboratories), but whether a market will develop around this complementary technology to get this spatial genomic rearrangements is an open question.

And then there is the alternative technologies available. Illumina’s purchase of Moleculo enables them to offer fully-phased, whole-genome haplotypes as part of their sequencing service. PacBio this month released a long-read human genome, with an average readlength of 8800 bp.  Oxford Nanopore has announced 100’s of early-access MinION devices before the end of November 2013. And Genia said at a meeting that they expect to launch in 2014, with a sequencer ‘instrument’ at less than $1,000 and a human genome (as a goal of course) at $100. One additional company developing a product for this area is Nabsys (their ASHG posters are available here if you are interested in taking a look.) While Genia, Nabsys (and one can argue Oxford) may be somewhat speculative in nature (in that their products are still in development), Moleculo and PacBio most certainly are not.

Which comes back to a business model question: what is the need that is being fulfilled, and what are people willing to spend on it? And is BNG the best answer to this question?