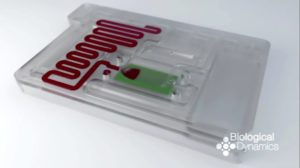 While at the CHI Molecular Tri-Conference a few weeks ago, you can learn first-hand what you may have heard in passing but due to constraints of time had not had the chance to look into more deeply. Biological Dynamics is one such company; a colleague at SeraCare told me briefly that they were worth looking into, as they were detecting cell-free DNA (cfDNA) using a novel method.

Their CEO Raj Krishnan gave a presentation entitled “Novel AC electrokinetic platform for isolating cfDNA and exosome biomarkers for clinical appplications”, that enriches and isolates small particles from plasma (going from viruses and exosome vesicles all the way down to 300bp DNA), in the 50-nm to 1000-nm size range. By using dielectrophoresis (described as the force exerted on a dilectric particle subject to a non-uniform electric field), they call their technology AC Electrokinetics, using electro-thermal and electro-osmotic principles to move nanoparticles directly from the sample.

Dr. Krishnan presented a video that was somewhat different than the one here on YouTube, in that his video showed a nanochannel video with DNA being segregated to one side of the channel, perpendicular to the flow of the sample through the channel. (The video of their technology shows circular pads that attract DNA and nanoparticles such as exosomes and cellular debris.) The advantages of the technology are several-fold: the fluidics are ‘Lab On a Chip’ miniaturized and self-contained; and the sample does not require up-front purification (the isolation is from 150 uL of blood, serum or plasma) dubbed a ‘sample to answer’ system.

Their instrument is called OmniVerita™ and looks at double-stranded DNA (dsDNA) from lung cancer patient samples in 30 minutes. By detecting only dsDNA >300bp, they are not being specific for an ctDNA markers; they are non-specifically detecting cfDNA larger than the majority species in cfDNA which is about 160 base-pairs. A brief search uncovered this nice Promega PDF of a presentation, and slides 33 and 37 show what is well-known, that due to periodicity of the nucleosome-wrapped DNA the peak is at 160-bp, with smaller peaks at 320-bp and 480-bp respectively. By not looking for ctDNA markers (i.e. particular driver gene mutations such as in PIK3CA or TP53), there isn’t any specific detection; however their application is treatment monitoring for cancer, and general rise in DNA in the bloodstream of a patient would be a proxy for recurrence of cancer, and its attendant necrosis and apoptosis shedding DNA that can be detected by this system.

Dr. Krishnan referred to data showing metastatic colo-rectal cancer progression (mCRC) and its correlation to the >300bp DNA signal they can pick up and the CarcinoEmbryonic Antigen (CEA) marker status, as well as clinical status. They have promising data for monitoring progression of other types of cancers (I remember him mentioning Prostate as well as Pancreatic cancers), with a clinical trial underway for Stage III Lung Cancer and Stage IV Breast Cancer called TR(ACE). More details about this study can be found at ClinicalTrials.gov.

While using physical detection of cfDNA using electrokinetic effects has its benefits (the aforementioned fast turnaround time of 30 or 40 minutes, the ability to go directly from a small 150 uL blood sample without up-front sample preparation of nucleic acids), the cell-free DNA >300bp will miss the majority target for the ctDNA assays, which is the major species at ~160-bp. That being said the target they are looking for is larger genomic DNA that hasn’t been chopped down in the natural degradative processes into smaller pieces. With the half-life of DNA in the bloodstream estimated at 30 minutes to 2 hours (the Promega PDF on slide 5 shows a plot of ng/mL of fetal DNA in plasma rapidly falling from 25 ng/mL to zero shortly after birth, typically a few hours), perhaps this generic detection of occult DNA in the bloodstream is ‘good enough’ for the platform’s intended use, which is monitoring treatment response.

Although there may be alternative methods to detect the same signal, can it be performed directly from a blood sample within 30 minutes? This is the value that Biological Dynamics has to offer. And some of its most promising potential may be in the effort to select for the exosome compartment using this method, and that is a topic for another day.