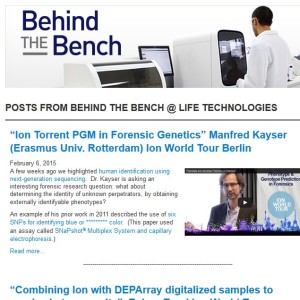 Right about one calendar year ago I was asked to start writing for a new blog for the Genetic Analysis division of Thermo Fisher Scientific. Called ‘Behind the Bench’, it took a few months to get off the ground, and started posting right at the end of May 2014.

A few personal comments on what I’ve learned this past year:

If you are interested in the most popular posts from 2014, they are available here. If you’d like to see all 113 posts published to-date, they are here.

Lastly, if you would like to ‘listen in’ on live-tweets from an upcoming conference (such as AGBT in Marco Island FL Feb 25, AACR in Philadelphia PA April 19 and ESHG in Glascow Scotland June 6) follow me on Twitter. And if you are interested in the top tweets from 2014, you can access them here too.

If there are topics you’d like to see in the future (suitable for this space rather than Behind the Bench), feel free to leave a comment below.