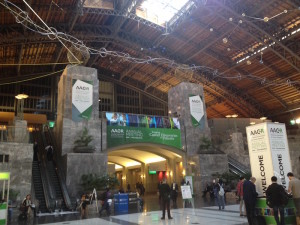 The annual AACR (American Association for Cancer Research) meeting was held in Philadelphia PA from April 18-22, and being able to attend several sessions is a privilege. (Yes I’m writing this the morning of the last half-day, knowing that there’s still a full morning of sessions including the last poster session.)

Over the years there have been major themes that are reflected in the major plenary talks, and one can also gauge interest in which of the parallel sessions are well-attended, and which of the posters have a crowd around them. In a meeting that has historically had from 15,000 to 17,000 attendees, this year the number was estimated to be over 18,000; with other duties for my own employer Thermo Fisher Scientific there was a lot of running around.

Not that I’m complaining – the feet are doing fine, even though it was probably a good 1/3 mile to walk from the farthest points (the Philadelphia Convention Center has one huge hall above the Reading Terminal Market, and another very large section called the Terrace Ballroom that was the main ‘hike’ to undertake). In particular, my ‘official’ company duties were interviewing people for Behind the Bench, such as this video of Dr. Kara Norman from the Acrometrix brand of control materials talking about the need to well-defined NGS controls given all the variables involved with the entire process.  But the video interviews were not only of internal Thermo Fisher Scientific employees; this video of Dr. Shintaro Iwata from Chiba Cancer Center Research Institute, Chiba Japan discusses his work (presented in one of the poster sessions) on pediatric osteosarcoma, a rare bone cancer, where he discovered a dozen novel coding SNV’s and used the Ion AmpliSeq™ Comprehensive Cancer Panel in conjunction with the Ion Torrent Proton™ System.

So after that explanation why my own intended schedule of presentations I was planning to attend didn’t quite work out the way I had anticipated (I wrote up a post detailing the talks I was planning to attend here), nonetheless for me there were a few major take-away themes that I’ll be thinking about. The first is the importance of cell-free DNA (cfDNA) and circulating tumor cells (CTCs) for early detection and on-going monitoring.

A presentation by Victor Velculescu (Johns Hopkins Kimmel Comprehensive Cancer Center, MD) yesterday did not disappoint, as he’s an outstanding speaker; he gave a great overview of his work on cell-free DNA, and if you’d like to dig into the details he presented work from this 2012 paper and this 2014 paper on cell-free DNA and its relationship to therapeutic course and outcomes across cancer types. This 2010 paper laid out their ‘PARE-Seq’ method, where copy-number alterations were shown from cfDNA. (Oh, by the way, that paper used Applied Biosystems’ SOLiD sequencing.) And there was this 2008 paper accompanied by the statement that cfDNA picked up alterations that were not detected in tissue; something that makes sense when you think about the inherent heterogeneity of cancer along with the ongoing processes of apoptosis and cfDNA being constantly cleared from circulation.

I now realize I’m falling into the trap of recapitulating favorite talks and the notes I’ve taken. I’ll try from here to refrain from delving too deep into my notes and share these details later when I have the luxury of time, which I do not have this morning.

On the topic of CTCs, an early ‘meet the expert’ session from Mehmet Toner (Massachusetts General Hospital, MA) was a highlight of the meeting for me. An engineer by training, he laid out the three generations of the microfluidic technology behind Johnson & Johnson’s CellSearch™ technology and the latest iteration of the technology called i-Chip™. The CellSearch technology uses positive-selection for the EpCAM surface adhesion molecule, while the third-generation i-Chip uses negative-selection (taking out the platelets, RBCs and WBCs using three physical properties called Deterministic Lateral Displacement, Inertial Focusing, and Magnetophoresis). For details here’s the 2013 reference, and a 2014 one to boot. And naturally he introduced the topic of CTC isolation with the huge technical challenge involved, with 1 Billion to 10 Billion cells that are normal, and looking for the 1 or 10 individual CTCs that may be lurking within it; imagine the challenge of having all the inhabitants of Earth going through turnstiles while looking for one or ten individuals.

And of course he had to end his presentation with data – that there are cells that are CTCs but have the same size as WBCs (there are methods that separate out CTCs by size), and other data indicating there are CTCs that are EpCAM-negative. Here’s a 2008 reference laying out the methods utilized for CTC isolation.

Yet another indication of the popularity of both cell-free DNA and CTC isolation was the interest in the Thermo Fisher Scientific booth about the LiquidBiopsy™ Platform. (I interviewed the CEO and CSO of Cynvenio Biosciences here.)

Another major theme to emerge from this year’s meeting was tumor heterogeneity, and its implications for tumor resistance. As an example, Jennifer Pietenpol (Vanderbilt Univeristy TN) gave a great talk on triple-negative breast cancer and its heterogeneity, with its poor prognosis, no targeted therapy, and 35K cases/year in the US. Analyzing extensive genomic datasets of TNBC and looking at gene expression profiles, she was able to molecularly classify TNBC into six subtypes (2 basal-like, immunomodulation, mesenchymal, mesenchymal/stem-cell-like, luminal/androgen receptor, and unknown), and develop a tool for its classification (the 2012 reference for the TNBCtype tool is here).

While on the topic of heterogeneity, in one well-attended session on data analysis Gad Getz (Broad Insititute MIT MA) shared extensive datasets with unique types of systematic artifacts where he developed new software tools to correct for them. One was caused by 8-oxoguanine formation during the process of ultrasonication (a standard library prep method for shearing), and a software tool to correct for these errors. Panel of Normals filter (PoNfilter), removing Tumor in Normal effects with the deTiN tool, and MutationValidator for TCGA data, it was rewarding to hear about all the effort he’s making to solve these problems (and making the tools available here, with the latest ones described to appear in the coming weeks). And the theme of his talk (and two subsequent ones) was repeated again and again – from an informatics standpoint, “somatic mutation detection is not a solved problem”. Or, to reverse it, “somatic mutation detection is still a problem”.

The last theme is related to the prior one – drug resistance in cancer. Bert Volgelstein (Johns Hopkins Kimmel Cancer Center, MD) made a clear case that inherent tumor heterogeneity at the molecular level. I won’t forget the amazing video illustrating graphically with both size and increasing colors the growth of a tumor, going dark grey with the first round of chemotherapy and then another small cluster growing size and different colors again from the side. And because of this heterogeneity, combination therapy will need to be adopted sooner in treatment rather than later, and he had convincing data to show in the case of pancreatic cancer. He also had cell-free DNA data that tracked treatment (he and Victor have worked closely together for many years), and made the statement that early detection need not to be very early; just the need to treat tumors when they are still small.

Well it’s time for me to run off now. The video interviews finished up yesterday, so no running back-and-forth except to catch the last poster session. By my count there were fifteen videos we were able to film (with me as the host and additional ones were filmed as well), some already available on Behind the Bench. I just stand there in front of a camera asking questions to people, so it really isn’t that bad if you haven’t done it before. A special ‘thank you’ goes out to the entire team (video crew and colleagues I work closely with), as well as with my co-worker friends (you know who you are!) who had to control themselves from ‘photo-bombing’ me while on-camera. And for all those who stopped me to say ‘hi’ while I was running around I thank you – those interactions meant a lot to me, and like other large conferences, may be the most significant ‘highlights’ of all.