“The future is already here – it is just not very evenly distributed.” William Gibson, author of Neuromancer and the person who coined the term ‘cyberspace’. 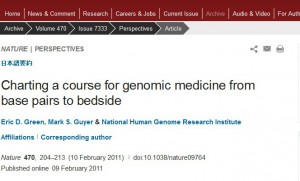 Screenshot of this Nature article by Eric Green (NHGRI Director), on the 10 year anniversary of the HGP

Way back in 2006 or so when I was working for Illumina, the personal genetics firm 23andMe launched their whole-genome genotyping service (called ‘Genetic Testing for Health, Disease and Ancestry’ now) for $1000. It was one of the first direct-to-consumer genomics firms. Another one, Navigenics, eventually closed shop and sold in mid-2012 to Life Technologies for an undisclosed sum, presumably for its CLIA- and CAP-certified laboratory diagnostics expertise, rather than an effort by Life Technologies to enter the direct-to-consumer genetics business. (A third, DeCODEme, is no longer in business.) As an employee of Illumina the genetic testing was using a version of the Infinium™ HapMap whole-genome genotyping arrays, and the invitation was to obtain this testing on for all my immediate family at a 50% discount.

Now at that time I was selling these microarrays for research purposes, and the genome-wide association study boom was taking off at that time. (For those not familiar with GWAS and how it has greatly furthered understanding of genetic risk and given many new avenues of research, the NGHRI maintains a great web resource of the more than 1300 GWAS publications, as well as their genomic position via an interactive catalog.) As a very-well informed ‘consumer’, this was an offer to sign-up to be a part of the genomics revolution, not only professionally but also personally, and not only for myself but also for my family.

But I declined. And I still decline.

Recently there has been a swelling of press about the need to get the 23andMe (genotyping) test, or to get a whole exome or whole genome sequence. George Church (prominent NGS developer and Harvard/MIT biologist) wrote an editorial last month in Nature (called ‘Improving Genome Understanding’, but indexed under ‘Genomics is Mired in Misunderstanding’) asking why not more of the scientific community has gotten on-board with personal genomics, and serving the cause by engaging conversation with the public. Anne Wocjicki (23andMe founder and former wife of Sergey Brin) in an interview with the NY Times said that ‘genetics is going to be a ubiquitous part of healthcare’. Entitled “For $99, eliminating the mystery of Pandora’s genetic box”, they have 475,000 individuals genotyped so far, and have a goal of 1M individuals by the middle of next year.

These editorials and interviews serve the purpose of getting the message out, and I have no qualms at all accepting its inevitability. Yet its commercialization on the direct to consumer side of things is hampered by two simple items that come up again and again – the utility of this information (how ‘actionable’ this information is), and concerns about privacy and the legal,  legislative and even social questions that surround it.

The NGS revolution is already underway, in areas where clear usefulness and an accepted framework for that usefulness has been established. I’m referring here to the adoption of NGS and gene panels in the clinical setting, as a Laboratory Developed Test (in the US), and in other countries where Research Use Only instruments and reagents are validated then offered under specific procedures and guidelines from a government agency. Many Life Technologies customers are using the Ion Torrent PGM™ plus an AmpliSeq™ Cancer Hotspot Panel v2 to personalize cancer treatment at many medical centers. Foundation Medicine  has a very successful IPO this past summer, rising 96% in the first day of trading, based upon whole-exome and RNA-Seq  sequencing from small amounts of FFPE-preserved clinical tumor samples, and publishes the results of their first 2,221 tests in Nature Biotechnology, with a positive predictive value >99%. A typical ‘cost per test’ for the PGM-based cancer panel of genes, is about $250 in the US; for the Foundation Medicine one, in a range of about $3,500, and these tests are often reimbursed. (Note however that the reimbursement situation in the US at present is in terrible shape.)

Another area in addition to cancer where NGS has already revolutionized healthcare is with Non Invasive Prenatal Testing (NIPT). Also with the same caveats (the NGS providers manufacture Research Use Only instruments and reagents, and clinical test developers validate and have procedures and guidelines to follow before being able to offer a clinical test), no less than four companies in the US offer this kind of service, and two in mainland China. All of them depend on the discovery in 1997 by Dennis Low of the Hong Kong University that free-floating fetal DNA could be enriched from a maternal blood sample, and that NGS can then determine via a sampling of that fetal fraction whether specific trisomies exist. (There is potential for other prenatal tests, but the first efforts concentrate on trisomies.) Already 100’s of thousands of tests have been performed, at a cost of several hundred to a few thousand dollars apiece. And the market is undeniably large – 4M live births in the US every year, 14M in China, and that’s only for two markets.

So the future is already here with regard to personalizing cancer treatment, and being able to test for trisomies before birth without amniocentesis. The future is not already here however, for personal genomics on the consumer level.

Arguments are made that lifestyle choices can be modified given what we know today about the usefulness of genetic risk data. But other than an abstract risk score of “a 30% greater likelihood” of a particular disease (Alzheimer’s? Cancer?), it remains an abstraction. And then there’s the rare variant that’s a ticking time bomb, of which it does occur however rarely. I remember attending an NIH symposium a few years ago where a ClinSeq Project participant, a healthy Bethesda-area entrepreneur, had been identified with a rare cardiac gene mutation that had important consequences for him and his family, and it was an unexpected finding in an otherwise healthy individual. This kind of benefit to a population as a whole is undeniable. But on an individual consumer-genetics level, for consumers to get a test done where the benefit to themselves is not clear enough, explains why adoption of this as a business has been slow.

The revolution continues, driven by a clear cost-to-benefit analysis of the ultimate consumer – individuals. Cancer and NIPT – and what other areas that will have new business models based around genetics and genomics of the human organism? I would volunteer that it would be PGD (Pre-Implanation Diagnostics) for In-vitro Fertilization (IVF), otherwise known as pre-implantation genetic testing. Dr. Dagan Wells (Oxford) on YouTube make a convincing case for this. Time will tell; it is the future, at any rate.

One thought on “Personal Genomics and the Future of Healthcare”