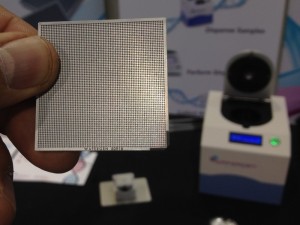 WaferGen is a California Bay-Area company that originally developed an idea similar to BioTrove, which was to create a solid substrate with nanoliter-sized wells for high throughput real-time PCR. WaferGen’s SmartChip™ has 5,184 wells (that’s a 54 multiple of 96), while BioTrove’s OpenArray™ has 3,072 (that’s a 32 multiple of 96). The concept is that each well contains a real-time assay master mix and the sample of interest, and a flexible format of sample number / real-time targets (either gene expression or end-point genotyping) can be performed in a single run.

For example, on the OpenArray (BioTrove was acquired by Life Technologies in 2009) and the QuantStudio 12K Flex™, you can obtain 16 genotypes across 144 samples, or 256 genotypes across 12 samples, and several points in-between. WaferGen came to the market several years after Fluidigm (their BioMark HD™ tackles the high-throughput real-time market using their soft lithography Integrated Fluidic Circuit™ technology) in 2008, about the same time as BioTrove did. Focused gene expression panels can be an option for the clinical research market, which is what NanoString and HTG molecular position themselves for. Relatively low-number SNP genotyping assays (but high sample number) is another clinical research market possibility, however entrenched technologies such as Luminex and AutoGenomics make for a difficult effort.

WaferGen reworked their technology to use their 5,184 wells for single-plex PCR amplification of samples for next-generation sequencing target enrochment. I wrote about the target enrichment market before, and it is a crowded one, roughly split along two dimensions: hybridization capture, which doesn’t have as high a specificity as PCR, but is a mature technology (Agilent SureSelect™ is now on V5 for their whole-exome, NimbleGen’s SeqCap EZ Human Exome is on V3, Illumina’s TruSeq Whole Exome appears to still be on their V1).

The other approach is PCR-based, and a few years ago the Fluidigm and RainDance systems were made available for target enrichment via PCR, and each system had their ‘sweet spot’ of number of targets. However neither approach has been able to scale to whole-exome. AmpliSeq though does scale, and offers the specificity and sensitivity of PCR for whole-exome as well as fixed panels and custom targeted capture.

So with no less than six competitors, many of whose products have been used for several years (target capture started to ramp up significantly in 2009 for the NGS market), where does WaferGen fit? 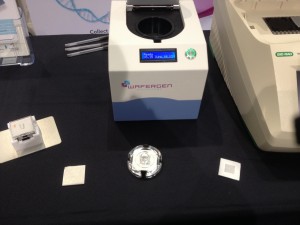 They have a SmartChip TE System™ that applies a single sample across a pre-made SmartChip with 5,184 primer-pairs already synthesized and preloaded into each 100nL nanowell. The assays are then thermal cycled, and afterwards are collected by a simple centrifugation adapter. Tailed (and optionally barcoded) amplicon primer oligos can be designed (currently available for the Illumina sequencing platform but I’m told that Ion Torrent adapters are under development) called SeqReady™, where both custom designs as well as a BRCA 1/2 panel are available.

The number of samples that can be processed by this system is only 12 samples per day, limited by the loading time it takes for a single chip (as well as the need to thermal cycle the chips for amplification).

If you have less target (5184 amplicons at an average length of 200bp target is over 1MB) and more samples, WaferGen just announced at AGBT the availability of they call a Multi-Sample Nano Dispenser system, where multiple samples can be loaded onto a SmartChip (not unlike the flexibility of the OpenArray mentioned earlier). Formats like 48 samples x 96 amplicons can target 19.2kb apiece (the 19.2kb is 96 amplicons times a 200bp average amplicon size). Multiple chip formats are offered for panels of different sizes.

The SmartChip TE System that loads a single sample per chip is on the order of $15K, while the Multi-sample system is about $95K.

So for single-plex PCR enrichment you can get a RainDance Thunderstorm for $250K for droplet PCR enrichment on the higher-throughput side (samples by target size), a Fluidigm Access Array system for $80K, or a WaferGen system for $95K (multi-sample) or $15K (single-sample). On top of this, RainDance recently announced their ThunderBolts™ Sequencing Panel that uses one part of their RainStorm digital droplet PCR system (the ‘RainDrop Source’ portion which is $50K of the $125K total RainDrop system price). Presumably RainDance will continue development of this technology so that more of their emulsion PCR droplet platform can migrate downward to the RainDrop Source device. The announcement is only for a ‘standard panel’, currently in early access, not a general custom solution yet.

The system from WaferGen fits into a less-expensive solution for single-plex enrichment for NGS, and their multi-sample loading system gives needed flexibility for the 5184 reactions these samples can fill up.

Since the Ion Torrent AmpliSeq gives very good coverage and sequencing efficiency (some >95% of the target at a 20x minimum coverage at a normalized 100x sequencing throughput, see this Application Note for details across several custom projects), there is a question of whether there is a need for the additional incremental specificity (and perhaps sensitivity) that a single-plex PCR can offer. WaferGen has a similar chart (figure 2 on this page) that shows uniformity as a percentage of the mean coverage; thus a 20x minimum at the 100x sequencing coverage would correspond to their ‘0.2x mean’ metric, and shows similar mid- to high-90% numbers.

All things being equal (and of course they rarely are), the need for specialized equipment versus being able to process a targeted selection NGS run with existing lab equipment tends to favor the latter.

For all of you who will be attending the upcoming AACR meeting in San Diego April 5-9 and interested in meeting me in person, drop me a note as I’ll be there as well. And for those not able to make it you can follow the goings-on via @DaleYuzuki on Twitter.